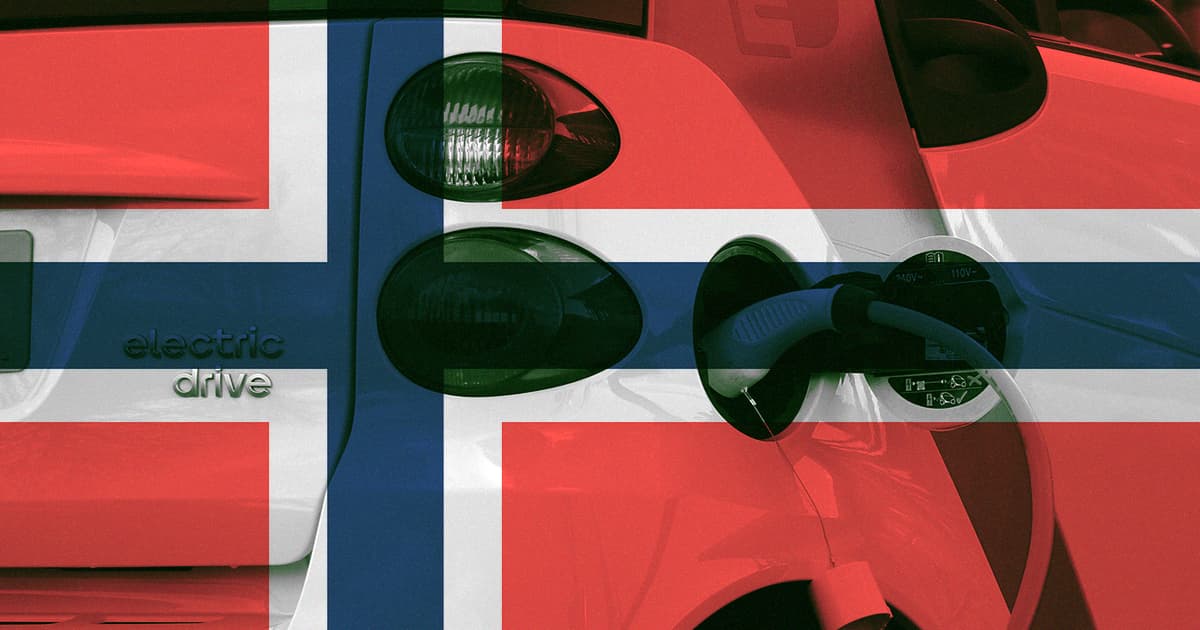 Nearly a Third of Norway's 2018 New Car Sales Were Electric

That's the highest percentage in the world.

That's the highest percentage in the world.

Norway just hit a major milestone on its mission to stop selling gas-powered vehicles by 2025. Over the entire course of 2018, 31.2 percent of all the new cars sold in the country were entirely powered by electricity instead of fossil fuels, according to Reuters.

That's the highest percentage worldwide, with Iceland in a distant second place with 12 percent, and a dismal 2.2 percent and 1.2 percent in China and the U.S., respectively. Just last year, only 21 percent of new cars sold in Norway were electric — a striking case study in how policy changes can affect a whole country's environmental impact.

Too often, though, a single percentage can obscure the scale of an accomplishment. According to Reuters, some 148,000 cars were sold in Norway in 2018. To put that into perspective, just under 1.4 million new vehicles were sold in the U.S. in November alone, 413,500 of which were passenger cars.

So while Norway's ongoing plan to curb vehicular greenhouse gas emissions is a monumental undertaking and that 31 percent mark represents a great shift in attitudes toward more environmentally-friendly lifestyles. But all things considered, it's not a ­huge numbers of gas guzzlers that were taken off the road.

What it Will Take

There are a few challenges in the way of Norway's ambitious plan to take gas-powered vehicles out of dealerships by 2025. Most importantly, according to Reuters, is the challenge of at-home charging.

Given that few people have dedicated, private places to park, full adoption of electric vehicles may be a harder sell than in an area where everyone has a garage or access to a charging station.

Even so, Norway is working hard to incentivize people to go electric, offering tax credits as well as free charging docks to people who go green — and these figures demonstrate that the approach seems to get results.

More on electric vehicles: CALIFORNIA IS INSTALLING CHARGERS FOR A TYPE OF ELECTRIC CAR THAT DOESN’T EXIST YET

Please Elon
Why These Tesla Owners Are Going on a Hunger Strike Against Tesla
8. 31. 22
Read More
Charged Up
Startup Says Amazing New Battery Lets EVs Drive 400 Miles, Recharge in 15 Minutes
6. 22. 22
Read More
Car Pile Up
Tesla Is Absolutely Spraying Out Cars
1. 24. 22
Read More
+Social+Newsletter
TopicsAbout UsContact Us
Copyright ©, Camden Media Inc All Rights Reserved. See our User Agreement, Privacy Policy and Data Use Policy. The material on this site may not be reproduced, distributed, transmitted, cached or otherwise used, except with prior written permission of Futurism. Articles may contain affiliate links which enable us to share in the revenue of any purchases made.
Fonts by Typekit and Monotype.