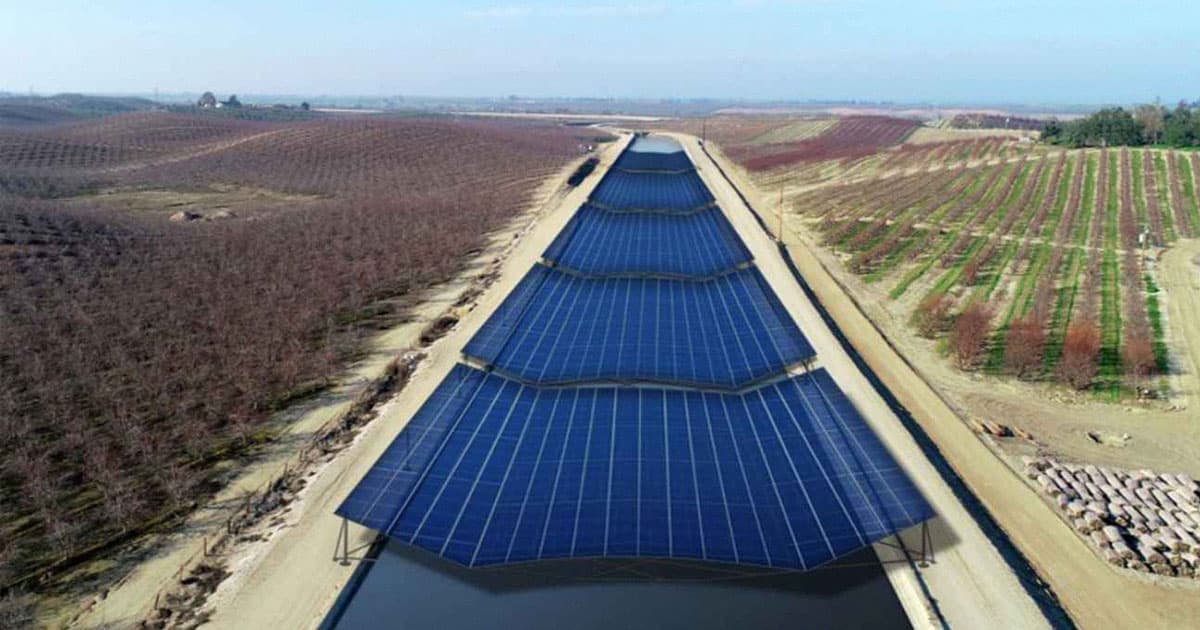 California is spending $20 million on a pilot project that will install more than a mile of solar panels over sections of important water sources, including canals — a futuristic effort to fight a devastating drought hitting California this summer with green technology.

The idea is simple. The massive panels, to be installed over the Turlock Irrigation District (TID) in central California by the end of next year, are intended to stop dwindling water reserves from evaporating too quickly and forming vegetative growth — while simultaneously providing renewable energy for the local grid.

While the pilot, dubbed "Project Nexus," will only serve as a "proof of concept," it's a creative solution to an ongoing climate change-related catastrophe. The Golden State has been ravaged by a historic megadrought this summer, forcing officials to implement drastic water conservation policies.

The TID is citing a 2021 study which found that shading 4,000 miles of public water delivery systems with solar panels could save approximately 63 billion gallons of water a year.

That's enough to meet the demands of more than two million people, according to the organization.

The solar panels themselves would generate enough energy to represent "one-sixth of the state's current installed capacity," according to TID's website.

Officials announced last week that California would be getting $310 million from the federal government for 25 projects that all address the historic drought conditions, as part of the Bipartisan Infrastructure Law act, which was signed by US President Joe Biden last year.

"Water is essential to everything we do and it will take all of us working together, to address the significant drought impacts we are seeing across the West," Secretary of the Interior Deb Haaland said in a statement last week.

Updated to correct the fact that TID referred to electrical production capacity, not water system capacity, with it's estimation of "one-sixth of the state's current installed capacity."

More on California: Scientists Warn of Megaflood That Could Drown California

Dry Dock
The Top 13 Wildest Objects That Terrible Droughts Have Revealed
8. 27. 22
Read More
Wake-up Call
The American West's "Megadrought" Is The Worst It's Been in 1,200 Years
2. 15. 22
Read More
Brands We Love
Adding Solar Power to Your Home Is Complicated. But It Doesn't Have to Be.
4. 14. 21
Read More
+Social+Newsletter
TopicsAbout UsContact Us
Copyright ©, Camden Media Inc All Rights Reserved. See our User Agreement, Privacy Policy and Data Use Policy. The material on this site may not be reproduced, distributed, transmitted, cached or otherwise used, except with prior written permission of Futurism. Articles may contain affiliate links which enable us to share in the revenue of any purchases made.
Fonts by Typekit and Monotype.