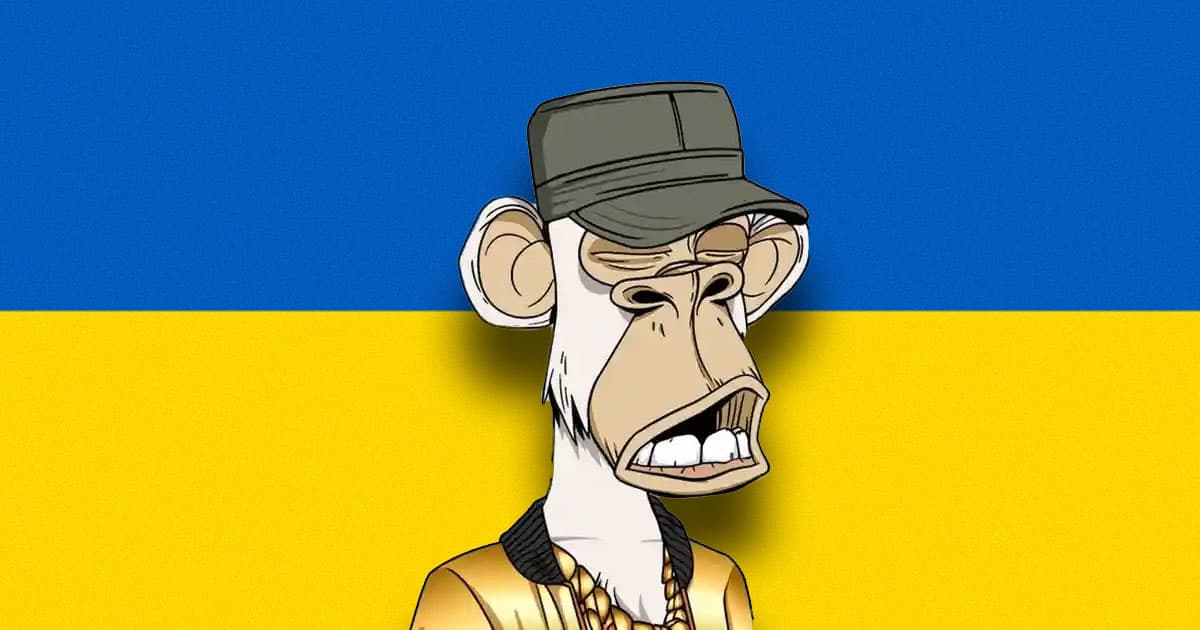 "I can't tell, because it's an ongoing war, exactly what we bought."

"I can't tell, because it's an ongoing war, exactly what we bought."

War of the Apes

The Bored Ape Yacht Club (BAYC), the second-most valuable NFT collection out there right now, announced this week that it’s donated $1 million in Ethereum to Ukraine.

“It’s been inspiring seeing our community come together in support of Ukraine — almost $1 million in ETH has been donated to Ukraine by wallets containing a BAYC ecosystem NFT,” the collective wrote in a Tuesday tweet. “Today we’re matching that with a $1 million ETH donation of our own.”

It’s a nice gesture, considering the ongoing travesty unfolding in the Eastern European nation — although, of course, the charitable move doesn’t say much about the overall merits of NFTs.

Alex Bornyakov, Ukraine’s deputy minister of digital transformation, noted the funds were already being put to good use this week.

“I can’t tell, because it’s an ongoing war, exactly what we bought,” Bornyakov said during a Monday Twitter Space discussion, as quoted by Insider.

Then, puzzlingly, he appeared to list exact things that had been purchased.

“So far, we purchased 400,000 military grade rations for our army, because they really need this food,” he added. “We bought thousands of bulletproof vests, and other kinds of protection which helped our military in day-to-day operations.”

Crypto transactions have some advantages over channeling money through the conventional banking system.

“With crypto, we can do those transactions in five minutes, in ten minutes, and you don’t have to get those approval through banks, the bank system,” Bornyakov said during the discussion.

According to crypto analytics company Elliptic, Ukraine has raised more than $60 million in crypto donations as of Tuesday.

The crypto community was quick to rush to Ukraine’s defense. NFT collectors, Web3 communities, and DAOs are all ready to back up the nation’s efforts to ward off Russian advances — a sentence that would have made absolutely no sense to anybody just a couple of years ago.

More on NFTs: NFT Guy Pays Rolling Stone to Run Article About How Great NFTs Are