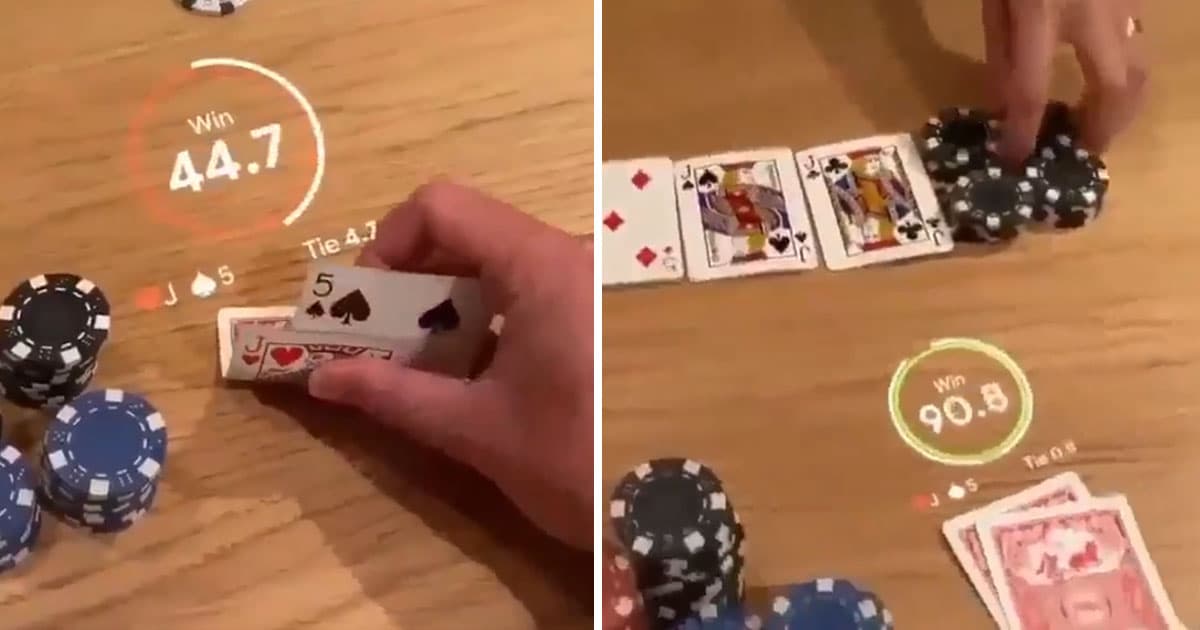 Looking for a good way to beat the odds at a casino? Developers seem to be working on an augmented reality (AR) filter that can help you win at poker.

In the video showcasing the concept, you can see the AR layer displaying your likely win percentage based on your hand in a game of Texas Hold ‘Em. As the game progresses, the percentage increases or decreases based on how likely you are to win that hand.

Check it out for yourself below:

Imagine the possibilities that combines #AR and #AI in #Vegas! #pokerlife

Though it’s likely just a proof of concept video for a potential AR project, it’s still very impressive. While cool, though, the origins of the AR filter seem to be a bit opaque.

Futurism was able to track the video to a Turkish AR Instagram page, which credited the video to Roman Emig, a cloud specialist for AR startup Holo Light. We reached out to Emig, who said that even he didn't know who the creator of the video was when he found and shared it — so the mystery deepens! Shoot us a message if you know, though.

Regardless, if we do see a commercially available poker AR like this one, you can rest assured AR glasses will quickly be banned from all casinos — lest you want to get roughed up by casino goons. But it could be good for your weekly poker night with the buds.

More on AR: Awesome AR Demo Lets You Shoot Magic with Your Fingers

Oh, Good
Oculus Founder Builds VR Headset That Kills User If They Die in Game
Nov 7
Read More
Breakthrough Technologies
Facebook Hardware Devs Reportedly Skeptical of Metaverse
10. 28. 21
Read More
Powered by Powerpoint
The CEO of Apple Thinks People Will Use Augmented Reality for Something Absolutely Hilarious
4. 5. 21
Read More
+Social+Newsletter
TopicsAbout UsContact Us
Copyright ©, Camden Media Inc All Rights Reserved. See our User Agreement, Privacy Policy and Data Use Policy. The material on this site may not be reproduced, distributed, transmitted, cached or otherwise used, except with prior written permission of Futurism. Articles may contain affiliate links which enable us to share in the revenue of any purchases made.
Fonts by Typekit and Monotype.