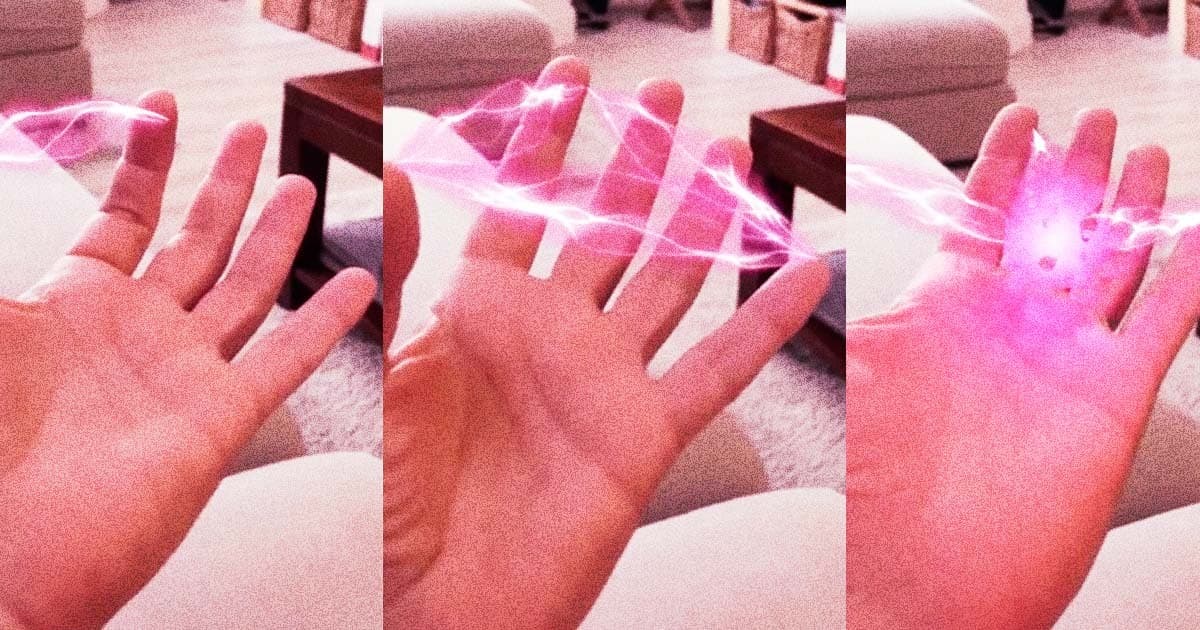 Awesome AR Demo Lets You Shoot Magic With Your Fingers

Ready to shoot magic energy bolts out of your fingers? Of course you are!

And you can, mostly, with an awesome new iPhone-based augmented reality experiment that game enthusiast and HoloForge Interactive CTO Olivier Goguel created and posted this morning.

"Welcome to my 'Let’s all be Wizards' experiment!" Goguel captioned his video on LinkedIn.

In the 53-second clip Goguel shared, which was also posted on Reddit to much positive feedback, the creator appears to have pink energy buzzing between his fingers. The beams move as if they're attached to his fingertips, and then a pretty energy ball appears over the palm of his hand as Goguel manipulates it. Then he tosses it at the wall, and the pink magic ball dissipates on the other side of the room.

"Thanks to depth sensors and vision based machine learning, we can create in real time a digital twin of the hand and its surroundings to generate a 3D environment where virtual and real objects interact seamlessly," Goguel wrote in his LinkedIn post.

People in Goguel's comments seemed thrilled about the demo, which inquiring minds can find and download on Github.

Honestly, the AR package seems more interesting than say, being sexually harassed in the Metaverse, and looks like the sort of thing TikTok users would love.

If a company were able to aquire and distribute Goguel's package, everyone could truly be a wizard. Just remember us when you sell it off for more than that Wordle deal, buddy!

Brands We Love
This Game Uses Artificial Intelligence to Recruit New Players
11. 16. 18
Read More
A New, Artificially Intelligent Hologram Was Just Born
9. 26. 17
Read More
Chinese Smartphone Maker Promises to Outdo Apple With "The Real AI Phone"
9. 19. 17
Read More
+Social+Newsletter
TopicsAbout UsContact Us
Copyright ©, Camden Media Inc All Rights Reserved. See our User Agreement, Privacy Policy and Data Use Policy. The material on this site may not be reproduced, distributed, transmitted, cached or otherwise used, except with prior written permission of Futurism. Articles may contain affiliate links which enable us to share in the revenue of any purchases made.
Fonts by Typekit and Monotype.