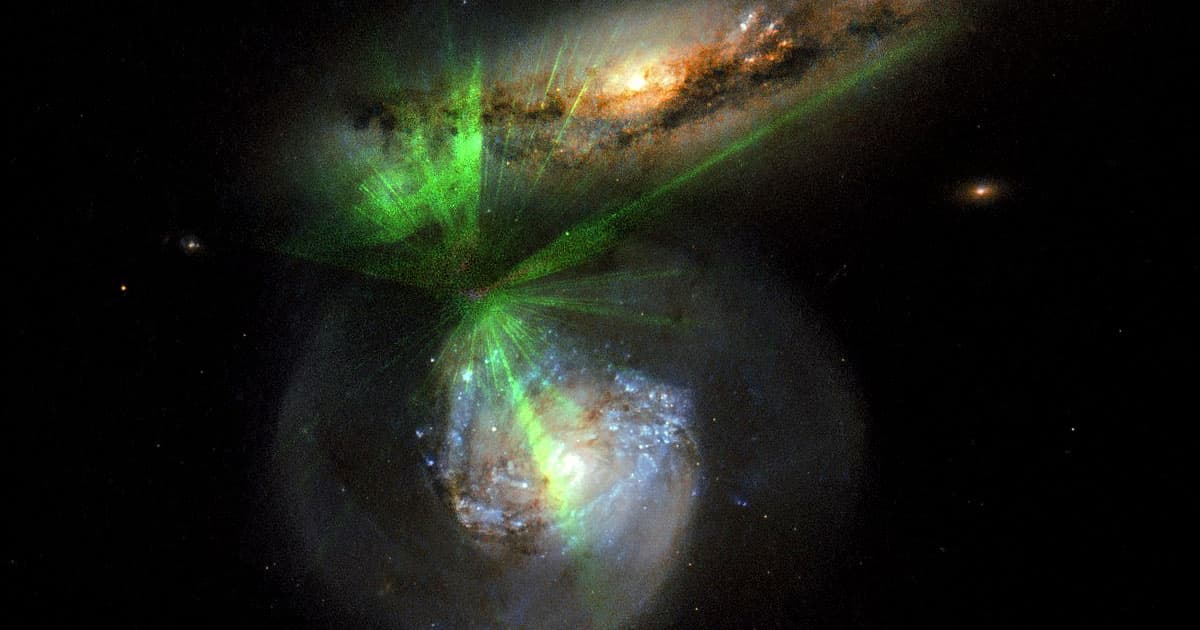 Hey, where's that coming from?!

Hey, where's that coming from?!

A team of astronomers have discovered a laser — technically a "megamaser" — coming from a whopping five billion light years from Earth, making it the most distant of its kind ever detected, CBS News reports.

That's 58 thousand billion billion kilometers, if you're keeping count. In other words, the time it took for the light to arrive here could be greater than the age of the solar system.

No, it's almost certainly not some ancient alien civilization pointing a gigantic laser pointer at the Earth from across the cosmos. The alternative is pretty epic too, though, because the megamaser is likely the result of two galaxies violently colliding, astronomers suggest.

The discovery could test what we already know about the evolution of galaxies and what happens when they merge with others.

"When galaxies collide, the gas they contain becomes extremely dense and can trigger concentrated beams of light to shoot out," Marcin Glowacki, lead author of a new study to be published in The Astrophysical Journal Letters, in a statement.

Galactic collisions are some of the most violent events we know of in the Universe, releasing unimaginable amounts of energy in the process.

"The OH megamasers act like bright lights that say: here is a collision of galaxies that is making new stars and feeding massive black holes," said co-author Jeremy Darling from the University of Colorado in a separate blurb.

The finding is an important proof of concept for the South African observatory called MeerKAT, which scientists used to make the discovery.

"This is the first hydroxyl megamaser of its kind to be observed by MeerKAT and the most distant seen by any telescope to date," Glowacki said. "It's impressive that, with just a single night of observations, we’ve already found a record-breaking megamaser. It shows just how good the telescope is."

Scientists are already excited by the prospect of future discoveries just like it.

"MeerKAT will probably double the known number of these rare phenomena," Darling said. "Galaxies were thought to merge more often in the past, and the newly discovered OH megamasers will allow us to test this hypothesis."

Woooaaah
Scientists: The Human Brain Has Odd Similarities to the Entire Universe
11. 17. 20
Read More
Really Really Really Old
Astronomers Puzzled By Ancient Milky Way-Like Galaxy 12 Billion Light-Years Away
8. 13. 20
Read More
Universe Machine
Scientists Found a Way to Create Millions of Virtual Universes
8. 12. 19
Read More
+Social+Newsletter
TopicsAbout UsContact Us
Copyright ©, Camden Media Inc All Rights Reserved. See our User Agreement, Privacy Policy and Data Use Policy. The material on this site may not be reproduced, distributed, transmitted, cached or otherwise used, except with prior written permission of Futurism. Articles may contain affiliate links which enable us to share in the revenue of any purchases made.
Fonts by Typekit and Monotype.