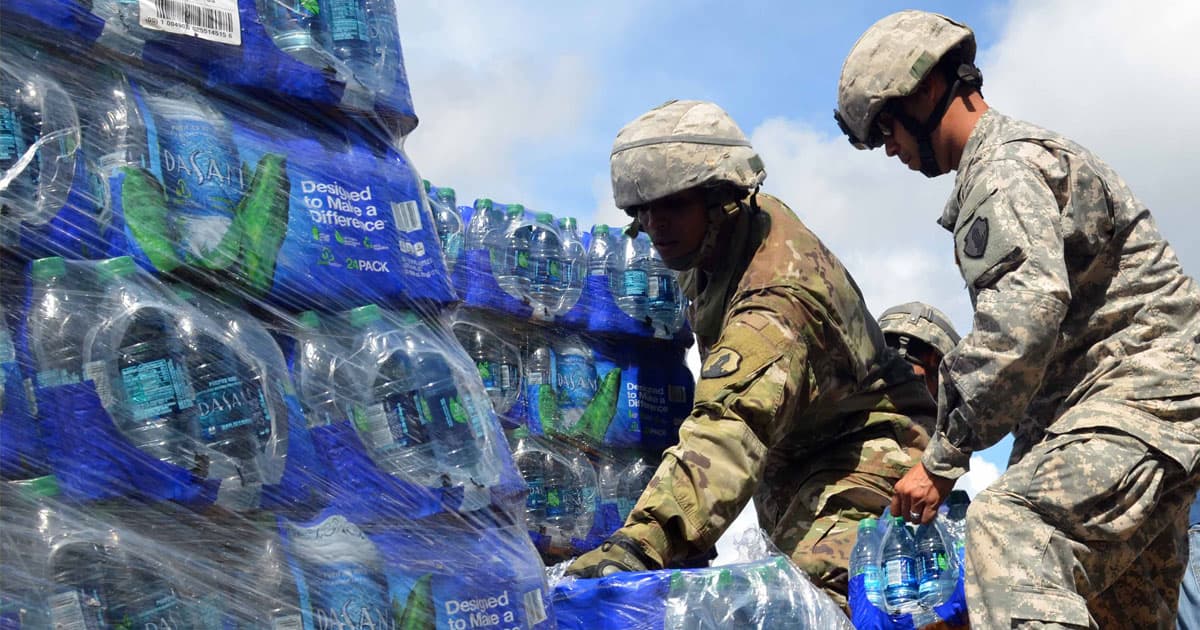 US Army Says Thirsty Soldiers Are Drinking Too Much Bottled Water

While deployed to arid environments, soldiers in the United States Army depend heavily on bottled water for hydration — just one base in Iraq, for example, went through more than 864,000 bottles every month in the 2000s.

But according to a Pentagon-commissioned report focused on how climate change will affect the military, that approach won't work in the future.

The report was released in August, and by analyzing outside research, its authors determined that the Army's reliance on bottled water is unsustainable in the face of climate change.

"The U.S. Army is precipitously close to mission failure concerning hydration of the force in a contested arid environment," the authors' wrote, adding that "the Army must reinvest aggressively in technologies both in-house and commercial off the shelf in the next 5-10 years to keep pace with rising global temperatures, especially those arid areas in or poised for conflict."

So, the Army needs to rethink how it sources drinking water. That's clear. But as Center for Climate and Security co-founder Francesco Femia, whose research the report cited, recently told Army Times, there's a bigger picture takeaway to the document.

"Honestly, the biggest lesson flowing from this study, even if it’s not explicit, is that in the next 20 years, it’s probably best to avoid some of these pretty catastrophic risks by just slowing the rate and scope of climate change," Femia said. "It’s going to be pretty important to avoid even a 1.5 degree increase in global temperatures."

More on the report: Pentagon Report Predicts Collapse of US Military Within 20 Years

You're Probably Drinking Microplastics With Your Bottled Water
3. 15. 18
Read More
CHON: Legacy
James Webb Discovers Coldest Ice in Known Universe, Harboring Molecules Essential For Life
3:19 PM
Read More
Not a Scientist, Just Three Chatbots in a Trench Coat
Largest Publisher of Scientific Journals Slaps Down on Scientists Listing ChatGPT as Coauthor
3:16 PM
Read More
+Social+Newsletter
TopicsAbout UsContact Us
Copyright ©, Camden Media Inc All Rights Reserved. See our User Agreement, Privacy Policy and Data Use Policy. The material on this site may not be reproduced, distributed, transmitted, cached or otherwise used, except with prior written permission of Futurism. Articles may contain affiliate links which enable us to share in the revenue of any purchases made.
Fonts by Typekit and Monotype.