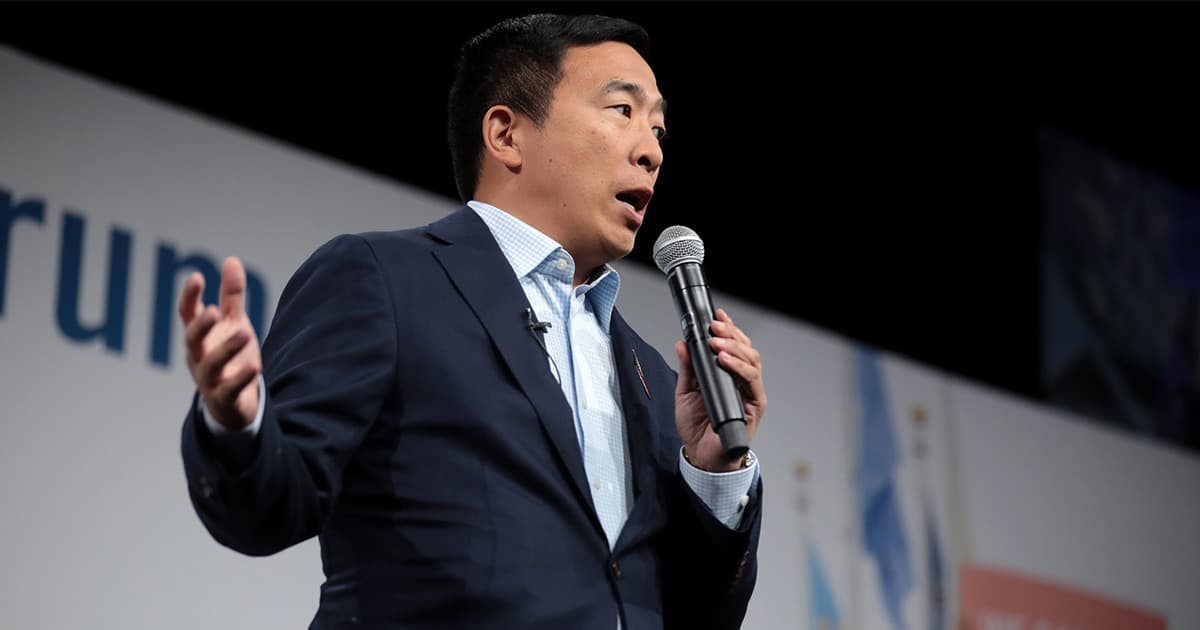 "The only stimulus that would work is #UBIStimulus."

"The only stimulus that would work is #UBIStimulus."

Former presidential candidate Andrew Yang argued this week that the coronavirus outbreak illustrates the need for his campaign promise of a basic income, Inverse reports.

The Federal Reserve cut interest rates in response to Wall Street experiencing record losses when markets opened on Monday. But in a Monday tweet, Yang argued that it was the wrong move.

"Lower interest rates do nothing for the wage worker losing shifts and tips, for the mom stuck at home looking after her child because the school closed, for the restaurant or theatre losing business because people are staying in," he wrote.

Basic income, Yang believes, would ensure people don't lose everything during an economic downturn by providing them with enough money to get by — and keep markets rolling.

"The only stimulus that would work is #UBIStimulus," Yang added in his tweet.

Basic income was a core plank of Yang's presidential campaign. His plan was to provide every U.S. citizen with a $1,000 monthly "freedom dividend" to take the load off people who are experiencing financial insecurity.

The concept isn't as far fetched as it sounds. The Canadian province of Ontario carried out a 2017 basic income pilot project, involving 4,000 people, which became a big success with participants continuing to work and often moving into better, higher-paying jobs.

More on basic income: Given Basic Income, People Kept Working and Got Healthier

Stranded
Man Lost at Sea for 30 Days Says It Was a "Nice Break" From Pandemic
10. 8. 21
Read More
Throwing Memes
Chinese State News Agency Floods Social Media With Anti-America COVID Memes
8. 10. 21
Read More
R-E-S-P-E-C-T
Here's Why People Are Calling Elon Musk a "Space Karen"
11. 16. 20
Read More
+Social+Newsletter
TopicsAbout UsContact Us
Copyright ©, Camden Media Inc All Rights Reserved. See our User Agreement, Privacy Policy and Data Use Policy. The material on this site may not be reproduced, distributed, transmitted, cached or otherwise used, except with prior written permission of Futurism. Fonts by Typekit and Monotype.