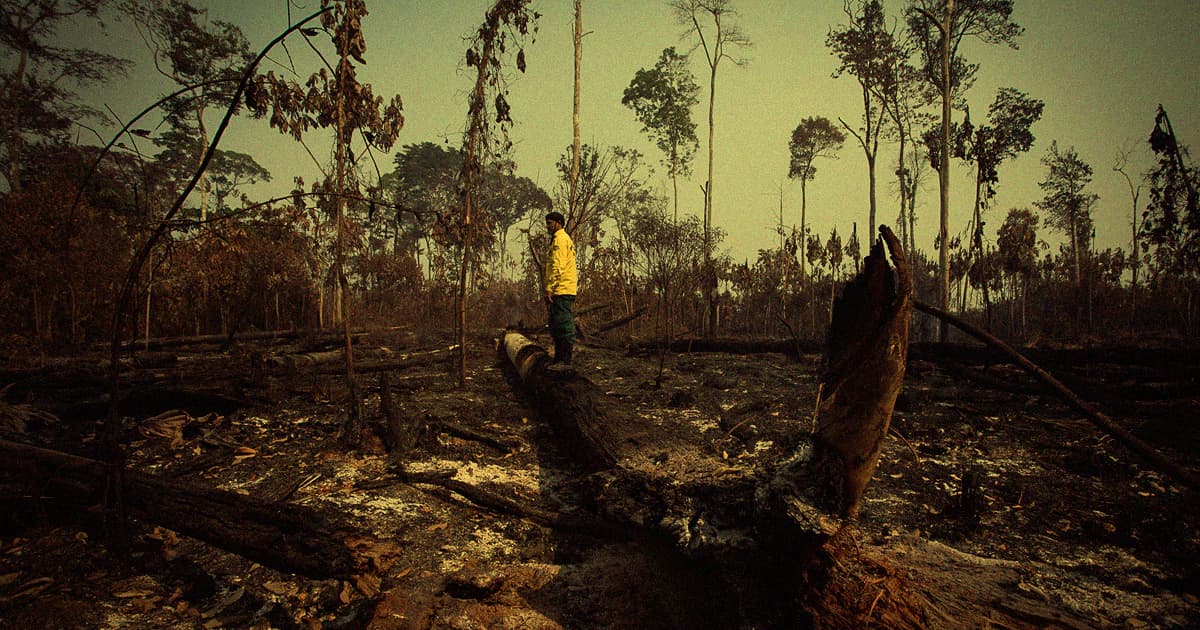 "The tipping point is here, it is now."

"The tipping point is here, it is now."

Regions of the Amazon rainforest are now releasing more carbon dioxide into the atmosphere than they can absorb. That, experts are warning, could mean that we're nearing a "tipping point" at which the planet's largest region of tropical forests will start to contribute to — rather than save us from — climate change.

According to a new study published in the journal Nature, changing weather patterns are reducing the Amazon's ability to absorb carbon. These patterns are likely to become increasingly commonplace thanks to global warming, releasing even more carbon dioxide in the future — a grim feedback loop that could spell even more trouble for the global environment.

The study examined the air measurements taken during hundreds of flights between 2010 and 2018 over the Amazon's rainforests.

Deforestation, the increasing burning of lumber, and severe droughts have only worsened the effect.

"We find that total carbon emissions are greater in eastern Amazonia than in the western part, mostly as a result of spatial differences in carbon-monoxide-derived fire emissions," the international team of researchers wrote in their paper. "Southeastern Amazonia, in particular, acts as a net carbon source to the atmosphere."

Experts, however, argue that it may not be too late to reverse the trend. Thomas Lovejoy from George Mason University, who was not involved in the research, told The New York Times that our "ability to build back a margin of safety" via reforestation is very real. "I don’t think you’ll ever get it back to what it was, but you can certainly improve it."

But for now, the phenomenon may only get worse thanks to the skyrocketing deforestation happening in the Amazon. Despite political pressure to reduce the trend, rates of deforestation have climbed significantly — particularly during the COVID-19 pandemic.

It's a delicate and dangerous moment that requires immediate action. In an editorial for the journal Science Advances, researchers warned that "the precious Amazon is teetering on the edge of functional destruction and, with it, so are we."

"Today, we stand exactly in a moment of destiny: The tipping point is here, it is now," they concluded.

READ MORE: Parts of the Amazon Go From Absorbing Carbon Dioxide to Emitting It [The New York Times]

Hidden City
NYC's Greenery Eats Up All the CO2 From Its Cars, Trucks and Buses "And Then Some"
Jan 6
Read More
It'll Buff Out
Humans Produce 100x More CO2 Than All Volcanoes Combined
10. 1. 19
Read More
Hydroelectric Projects Are Displacing Indigenous Groups in the Amazon
2. 8. 18
Read More
+Social+Newsletter
TopicsAbout UsContact Us
Copyright ©, Camden Media Inc All Rights Reserved. See our User Agreement, Privacy Policy and Data Use Policy. The material on this site may not be reproduced, distributed, transmitted, cached or otherwise used, except with prior written permission of Futurism. Articles may contain affiliate links which enable us to share in the revenue of any purchases made.
Fonts by Typekit and Monotype.