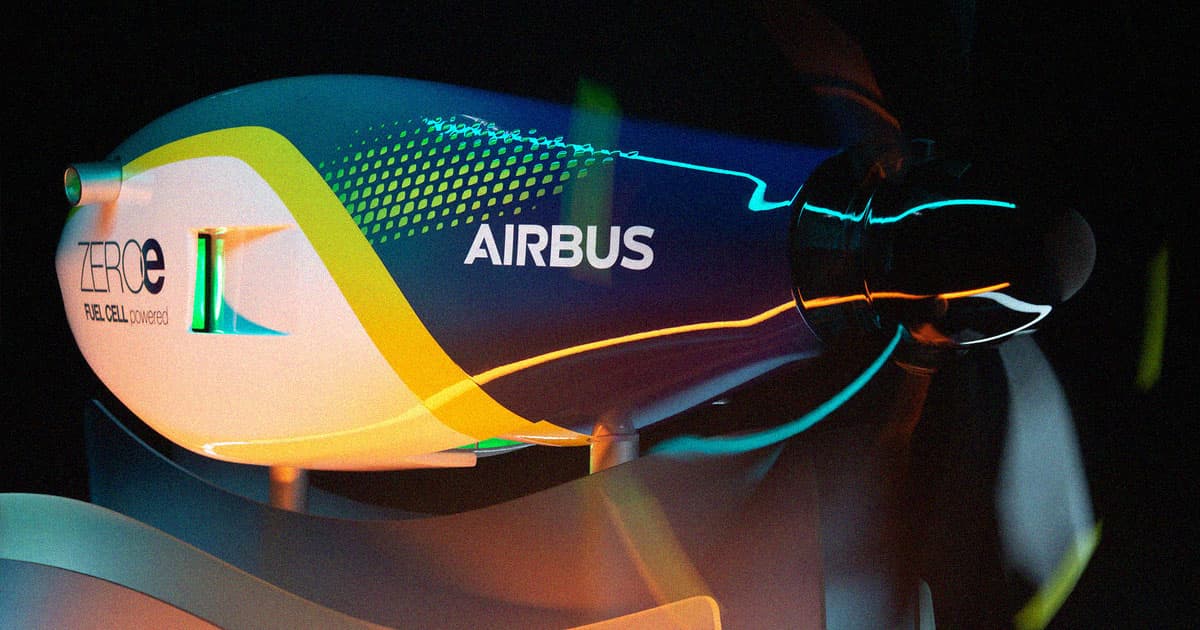 The idea is finally taking shape.

The idea is finally taking shape.

Airbus has announced that it's strapping an experimental hydrogen fuel cell engine to a modified A380 superjumbo jet, an exciting new foray into the concept of powering commercial passenger aircraft with hydrogen alone.

The company says it's planning to start test flights in 2026 and launch a fully operational first zero-emissions aircraft by 2035 — an ambitious timeline, considering that we're only starting to understand the potential of the idea.

But moving to hydrogen could dramatically cut the carbon footprint of air travel, which has historically been a massive contributor, representing 2.8 percent of global CO2 emissions. Of course, that's all if the company can actually pull it off.

As a first step, Airbus is planning to test its ZEROe Fuel Cell Engine, which it unveiled at its Airbus Summit on this week, attached to the wing of a modified A380 commercial jet.

"In terms of aerodynamics, the A380 is a very stable aircraft," said Mathias Andriamisaina, head of ZEROe demonstrators and tests at Airbus, in a statement. "So the pod attached to the rear fuselage via the stub doesn't pose much of an issue."

Airbus already showed off previous concepts of aircraft that could make use of both hydrogen fuel cells and traditional combustion engines. The company, however, believes aircraft could still achieve flight with hydrogen alone.

"At scale, and if the technology targets were achieved, fuel cell engines may be able to power a 100-passenger aircraft with a range of approximately 1,000 nautical miles," vice president of Zero-Emission Aircraft Glenn Llewellyn said in the statement.

But realizing its vision could prove difficult. Hydrogen is far less energy dense compared to kerosene, making it a considerably less efficient fuel by weight.

Then there's the fact that the production of hydrogen has proven challenging, costly, and potentially environmentally harmful as well.

That hasn't stopped airlines and aircraft manufacturers from pursuing the idea, at least on a lip service level. In fact, there has been a groundswell in companies attempting to turn the idea into a reality.

Just earlier this week, Rolls-Royce and partner budget airline EasyJet announced they 'd pulled off the "world’s first run of a modern aero engine on hydrogen."

While converting air travel to run on hydrogen could take many years, experts believe the industry could start the process with short-haul flights at first, which could still represent a sizeable cut in emissions.

SAF Power
Airbus Tests Jetliner Powered by "100 Percent" Renewable Fuel
11. 30. 21
Read More
Floating Solar Rigs Split Seawater to Make Hydrogen Fuel
12. 18. 17
Read More
A Tiny Device Can Transform Air Pollution Into Usable Fuel
5. 15. 17
Read More
+Social+Newsletter
TopicsAbout UsContact Us
Copyright ©, Camden Media Inc All Rights Reserved. See our User Agreement, Privacy Policy and Data Use Policy. The material on this site may not be reproduced, distributed, transmitted, cached or otherwise used, except with prior written permission of Futurism. Articles may contain affiliate links which enable us to share in the revenue of any purchases made.
Fonts by Typekit and Monotype.