The "initial results are very promising." 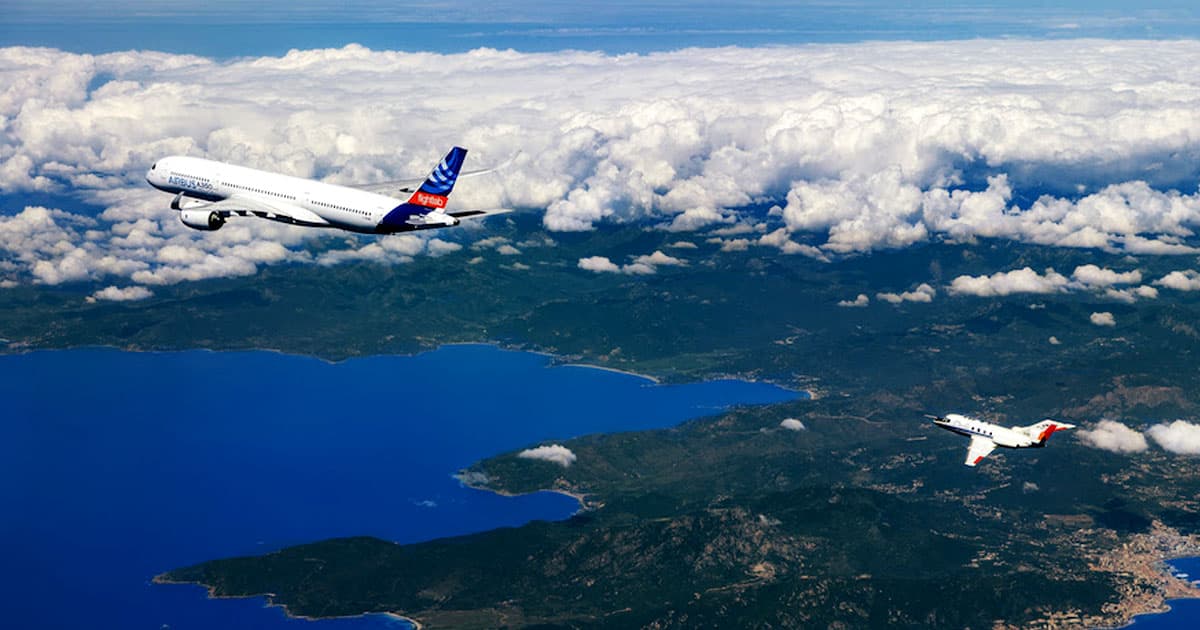 For the first time ever, a commercial airliner has taken flight with both its engines running entirely on sustainable fuel recycled from waste products, a collaboration between Airbus, Rolls-Royce, and the German space agency (DLR).

The plane, an Airbus A350, took off from southern France and spent about 30 minutes airborne on three separate occasions back in April.

Now, the results are in — and they look "promising," according to a press release.

"We were really happy to see, as predicted, the particular emissions of the aircraft were much lower when using the 100 percent SAF," head of future fuels at Airbus Toby Wells told the BBC. "These particular emissions lead to the formation of contrails, which have a big contribution to aviation's climate impact."

"We still have a lot more data to analyze and further tests to perform, but the initial results are very promising," he added.

The jet's fuel was made up of 100 percent sustainable aviation fuel (SAF). Right now, the airline industry only allows planes to use blends made up of only 50 percent SAF and conventional jet fuel.

SAF may closely resemble conventional jet fuel on a chemical level, but no fossil fuels are needed to produce it, making its carbon footprint significantly smaller.

The fuel can be made from a mash of different waste materials including cooking oil, other waste oils, and even solid waste from homes and businesses including plastic, paper, textiles, and food scraps.

Getting hands-on data is crucial to investigate if relying entirely on SAF is feasible.

"Engines and fuel systems can be tested on the ground but the only way to gather the full set of emissions data necessary for this program to be successful is to fly an aircraft in real conditions," Steven Le Moing, program manager at Airbus, said in a statement. "In-flight testing of the A350 offers the advantage of characterizing direct and indirect engine emissions, including particulates from behind an aircraft at high altitude."

All told, it's a promising new development that could allow us to greatly reduce the carbon footprint of commercial airliners.

Read This Next
Smashing Atoms
Startup Says It's Honing in on Simple Solution for Practical Fusion Power
The Humanity!
Chimpanzee Star of "Buddy" Found Alive After His Owner Allegedly Faked His Death
Unreliable Friends
Archipelagic Nation Sick of Other Countries Breaking Climate Change Promises
The Kids Won't Be Alright
Elon Musk Warns That Humankind Will "End Up in Adult Diapers"
FROM THE DEPT. OF THINGS TO BUY
Best Compost Bins of 2022
More on Earth & Energy
Fashion Week
Yesterday on the byte
Scientists Discover Horrifying Crab That's Covered in "Hair"
Fire Bird
Friday on the byte
Experts Say Birds Are Catching on Fire on Power Lines and Starting Wildfires
Three Cheers
Friday on the byte
Happy BBQ Season! There's Beer Made From Toilet Water Now
READ MORE STORIES ABOUT / Earth & Energy
Keep up.
Subscribe to our daily newsletter to keep in touch with the subjects shaping our future.
+Social+Newsletter
TopicsAbout UsContact Us
Copyright ©, Camden Media Inc All Rights Reserved. See our User Agreement, Privacy Policy and Data Use Policy. The material on this site may not be reproduced, distributed, transmitted, cached or otherwise used, except with prior written permission of Futurism. Fonts by Typekit and Monotype.