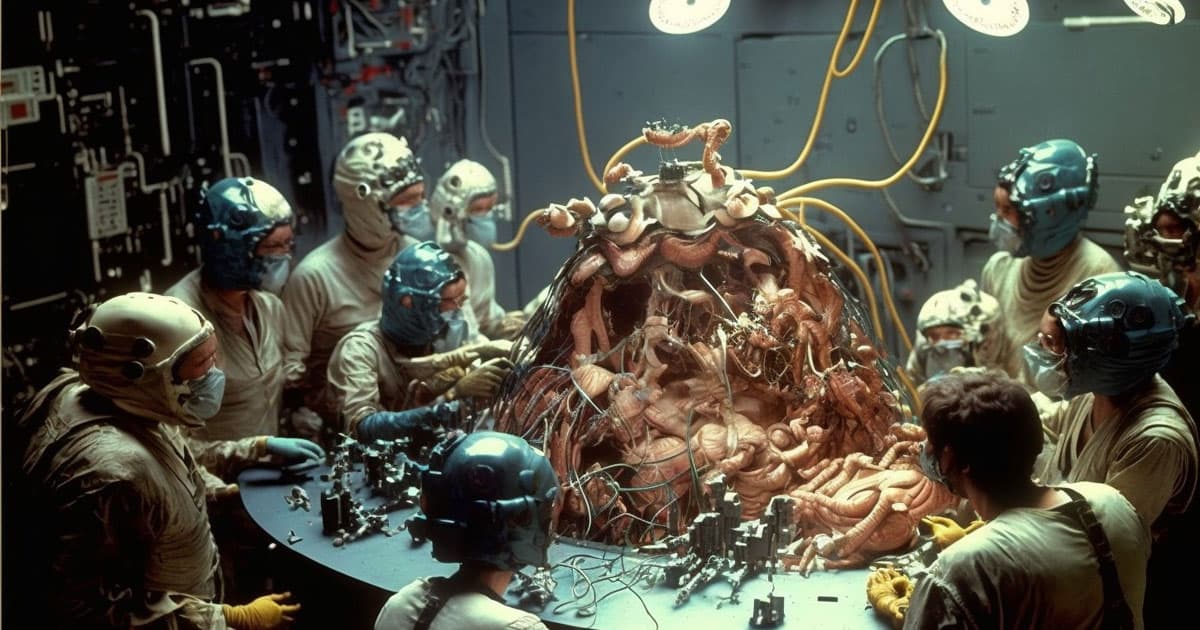 Horror fans, you're either about to be impressed or pissed off — or both.

On Tuesday, music video and commercial director Keith Schofield tweeted out an eye-grabbing series of images titled "David Cronenberg's Galaxy of Flesh (1985)," fooling some into thinking that it was an actual movie by the famed body horror director.

And to an extent, it's not hard to see why. Filled with fleshy appendages and a colorful cast clad in grimy sci-fi attire reminiscent of the decade, you'd be forgiven — especially if you weren't familiar with Cronenberg's body of work — for mistaking the thumbnails for real stills. It's even got the hard lighting nailed down too, bursting with that classic, old school glossy sheen.

But in reality, the shots were generated using the popular AI image generator Midjourney. That would be apparent if you paid close attention to the hands or sometimes the eyes, because, in true AI-generated fashion, they're all sorts of wonky. The overall effect, though, is unquestionably impressive.

Many of you might see these as innocent imitations, but for horror fans and Cronenberg heads, there's just one small problem: the images don't look like Cronenberg's work at all.

"Proof that AI art is a horseshit scam," wrote film critic Jeff Zhang. "David Cronenberg has never in his entire life made a single movie that looked anything like this."

And that's true. Cronenberg didn't make space odyssey, sci-fi epics, nor were his contortions and mutilations of the flesh so gaudy.

The images look more like a general pastiche of 80s horror and sci-fi, like a "Star Wars" crossed with "Society" — at the risk, perhaps, of offending fans of either movie.

Fans' suspicions ultimately proved to be correct, as Schofield later admitted that he actually didn't use Cronenberg as a prompt, since his name is banned in Midjourney, and instead asked the AI to make a "Star Wars medical body horror."

Crimes of the Future

AI image generators remain a touchy subject for artists, as popular models like Stable Diffusion and Midjourney were trained on the work of human artists without their permission, which many would argue is tantamount to plagiarism.

And sometimes, things can get too on the nose when AI-guys try to explicitly copy an artist's style — which is why horror fans weren't too pleased at the notion of attributing the image set to the iconoclast director.

Still, who are we kidding? If this was a real movie and not an AI amalgamation, we'd watch it.

More on AI images: Artist Says They Were Banned Because Their Art Looked Like AI, Even Though They're Human

AI After All
This Entire Sci-Fi Magazine Generated With AI Is Blowing Our Puny Human Minds
Thursday
Read More
Stop Ripping Us Off
Artists Furious About AI That Draws Stylized Portraits of People
12. 11. 22
Read More
Balloon Pop
Footage Shows Chinese Balloon Being Shot Down
Yesterday
Read More
+Social+Newsletter
TopicsAbout UsContact Us
Copyright ©, Camden Media Inc All Rights Reserved. See our User Agreement, Privacy Policy and Data Use Policy. The material on this site may not be reproduced, distributed, transmitted, cached or otherwise used, except with prior written permission of Futurism. Articles may contain affiliate links which enable us to share in the revenue of any purchases made.
Fonts by Typekit and Monotype.