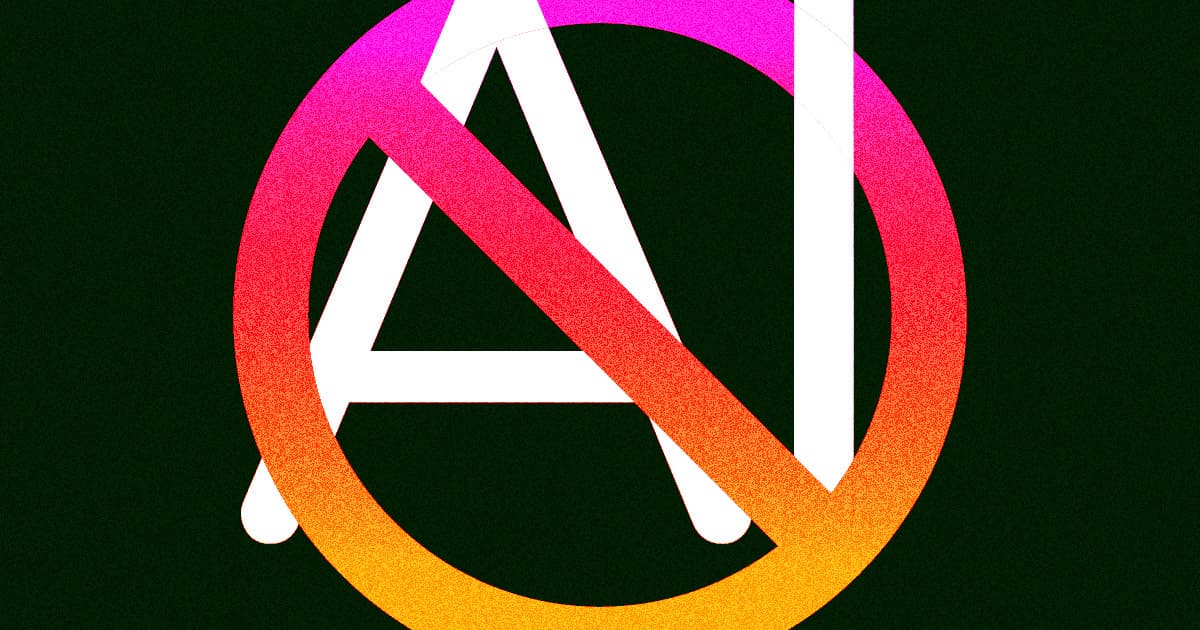 "No artist gave consent to have their art used. We were not compensated."

"No artist gave consent to have their art used. We were not compensated."

The artists are not happy.

Over the past week, human artists across the internet have risen up to protest the proliferation of image-generating AI — particularly on ArtStation, a website which has also been a popular source for generators to scrape from.

Until recently, the backlash was widespread but not particularly organized. Now, though, artists and enthusiastic allies have rallied behind a no-nonsense, anti-AI logo: a red prohibition circle over the uppercase letters "AI." It appears the logo was first shared by artist Alexander Nanichtkov in a tweet on December 5, after which it began to spread on ArtStation, Ars Technica reports.

By the time Zakuga Art shared a version of the logo in a viral tweet a week later, the movement had catalyzed, and ArtStation soon found its home page dominated by anti-AI sentiment.

"AI creates the 'art' you see on the backs of artists being exploited," reads the tweet, which broadly summarizes the grievances of artists. "AI 'art' is currently scraping the web for art and uses it in datasets. No artist gave consent to have their art used. We were not compensated."

The creativity of artists protesting is so beautiful.#AIart #artstation pic.twitter.com/QKyyP0sder

Seeing the logo spread so prolifically is a striking display of solidarity — you don't even need to specifically search for it on ArtStation. Its trending, latest, and community pages all prominently feature the logo.

However, contrary to what some have been spreading as disinformation, spamming the logos will not affect the images generated by current models like Stable Diffusion, since they have already been trained on older data sets which are not updated.

Still, the real kicker here is both the solidarity and the creativity exhibited by artists in their protests, something that the AI models that cynically mine their works may always struggle to replicate.

The protests, which are still going strong, have succeeded in getting Stability AI, Stable Diffusion's creator, to budge on its AI policy, allowing artists to opt out of letting their art be used to train future versions of its generators.

That likely won't be enough to appease artists, but it's a start. Overall, it's remarkable just how quickly the tides have turned on the use of AI art, and artists are drawing a bloody line in the canvas to let those that unfairly profit off their hard work that enough is enough.

AI After All
This Entire Sci-Fi Magazine Generated With AI Is Blowing Our Puny Human Minds
Thursday
Read More
Stop Ripping Us Off
Artists Furious About AI That Draws Stylized Portraits of People
12. 11. 22
Read More
Balloon Pop
Footage Shows Chinese Balloon Being Shot Down
Yesterday
Read More
+Social+Newsletter
TopicsAbout UsContact Us
Copyright ©, Camden Media Inc All Rights Reserved. See our User Agreement, Privacy Policy and Data Use Policy. The material on this site may not be reproduced, distributed, transmitted, cached or otherwise used, except with prior written permission of Futurism. Articles may contain affiliate links which enable us to share in the revenue of any purchases made.
Fonts by Typekit and Monotype.