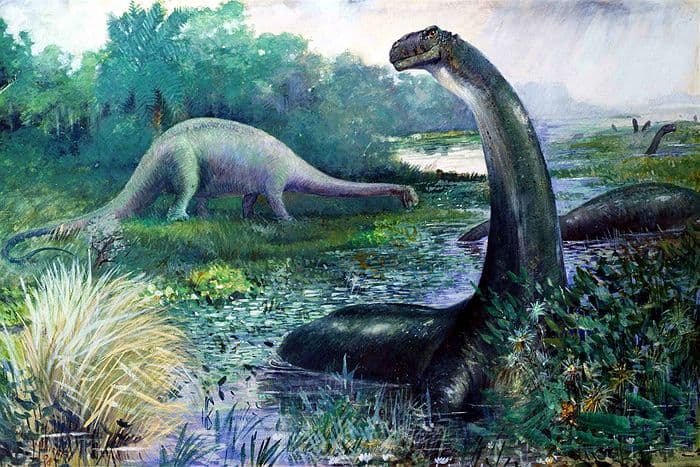 A new paper gives hope to fans of The Land Before Time. As it turns out, the brontosaurus might have actually existed.

For decades, the brontosaurus was believed to be one of the largest creatures ever to walk the Earth. It was named in 1879 by paleontologist Othniel Charles Marsh, and was characterized by an extremely long neck and an almost equally impressive tail. The 1988 animated film The Land Before Time, which featured a  brontosaurus protagonist (Littlefoot) helped push this dinosaur into legendary status.

There was just one problem: Scientists determined that the brontosaurus never actually existed.

Over a century ago, in 1903, a paleontologist (Elmer Riggs) found that the Brontosaurus was, apparently, the same species as the Apatosaurus. In fact, they were the exact same. At least, that's what Riggs claimed, and that's what the general consensus was.

However, a new paper aims to bring the brontosaurus back.

A 300-page study, which analyzes some 477 features on 81 sauropod specimens and took over 5 years of research, found that the Apatosaurus and Brontosaurus fossils appear different enough to be considered different organisms. "Generally, Brontosaurus can be distinguished from Apatosaurus most easily by its neck, which is higher and less wide," says lead study author Emanuel Tschopp, a vertebrate paleontologist at the New University of Lisbon in Portugal. "So, although both are very massive and robust animals, Apatosaurus is even more extreme than Brontosaurus."

That said, she scientists note that they did not set out to establish the brontosaurus as a fully fledged dinosaur. Rather, their initial goal was simply to detail the relationships of the sauropods (these are known as the diplodocids, and include Diplodocus, Apatosaurus, and [once again] Brontosaurus).

If its not enough to resurrect the brontosaurus, the researchers are resurrecting three distinct classes of the creature. There is the Brontosaurus excelsus, which was the first discovered and described, and two new kinds— Brontosaurus parvus and Brontosaurus yahnahpin.

So, why the sudden change? Well, five years of research isn't exactly "sudden." That said, this kind of examination wouldn't have been possible a few decades ago, as new findings were needed to pave the way for this landmark work. Tschopp notes that their research would have been impossible even in 2000. It wasn't until the rather recent findings (involving dinosaurs that are rather similar to apatosaurus) that it became possible to examine the fossils and determine just how different these organisms actually are.

Scientific American reports that a number of paleontologists are excited by this new study and find the work to be quite persuasive.

"We're delighted that Brontosaurus is back," says Jacques Gauthier, curator of vertebrate paleontology and vertebrate zoology at the Yale Peabody Museum of Natural History. "I grew up knowing about Brontosaurus — what a great name, 'thunder lizard' — and never did like that it sank into Apatosaurus."

Vertebrate paleontologist Mike Taylor at the University of Bristol in England, notes that the work is exceptional. He praises, "the magnificent comprehensiveness of the work this group has done, the beautifully detailed and informative illustrations, and the degree of care taken to make all their work reproducible and verifiable. It really sets a new standard. I am in awe of the authors."

However, some paleontologists assert that, while the work is impressive, the jury is still out on the brontosaurus. Since it has already been several million years, I am guessing that the brontosaurus can wait a few more years for full recognition.