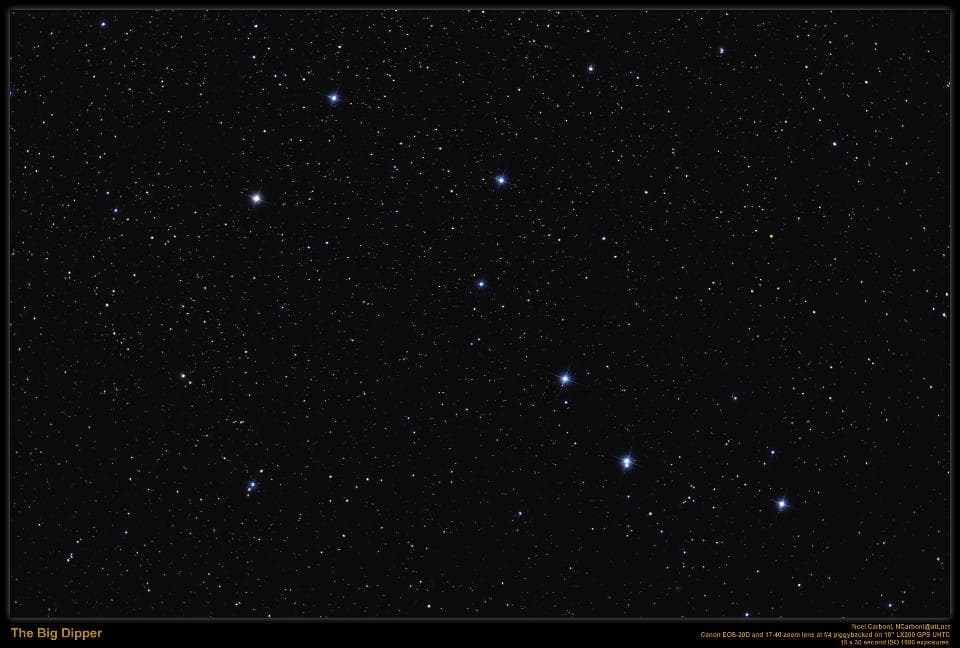 The origin of the name ‘Big Dipper’ is confusing for constellation historians; nobody knows where it came from. Some believe it originated from Africa, where it was known as the Drinking Gourd. Later in America during the latter half of the 19th century, the name transitioned to the ‘Great Dipper’ and soon after ‘Big’ replaced ‘Great’.

The Big Dipper does show a great prominence throughout human history. Most of the time, the Dipper is seen as some sort of wagon, as is the case in Irish, French, and British history. These stars are also featured in the state flag of Alaska (United States). This grouping is referenced in the bible as “the seven stars” (Amos 5:8) and dates back to the culture of the Stone Age, making this formation recognized by humans for the past 8,000-12,00 years.

However, the Dipper is doomed, and will fly apart in the near future. Five of the seven dipper stars apparently belong to a loosely joined star cluster, which is moving through space in the same direction. The other two stars, Dubhe (the northern Pointer) and Alkaid (the star at the end of the handle), are not part of this swarm and seem to be running away from their fellow stars in the opposite direction.

What does this mean? The dipper is going to fall apart. It will still resemble the Dipper, as we know it, for the next 25,000 years or so, but this awesome non-constellation will definitely be deformed beyond recognition in the next 50,000 years.