The Best View in the Galaxy 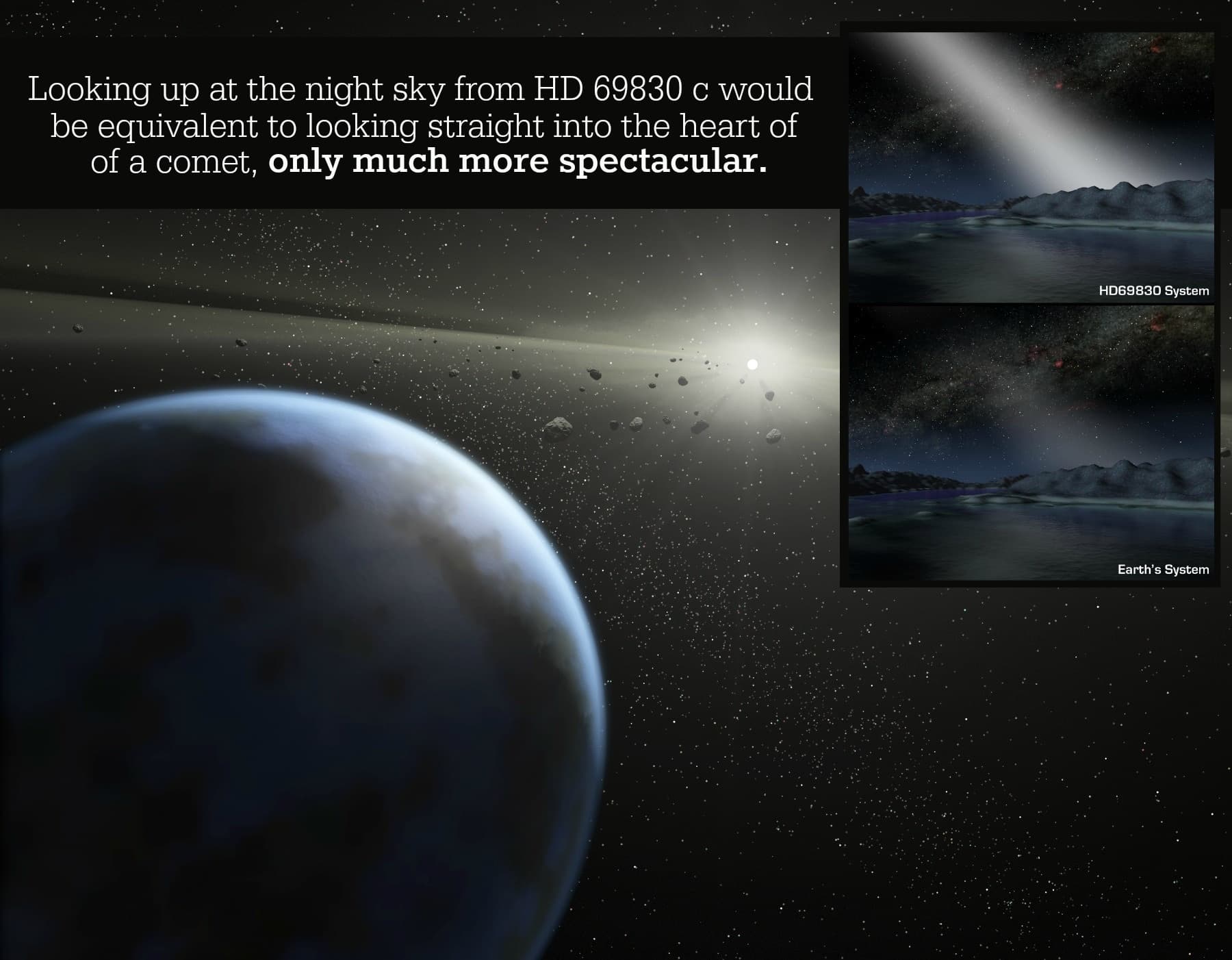 If you think that we have a pretty good view of the cosmos from Earth, imagine living on HD 69830 c. This planet orbits an orange dwarf star that's approximately 41 light-years from Earth in the constellation Puppis. In 2005, it was discovered that there is a debris disk in this system; a disk containing substantially more dust and rock than the amount found in our own solar system's asteroid belt. In fact, the newly discovered asteroid belt is roughly 20 times more massive than the one that is found between Mars and Jupiter. And it's ten times closer to HD 69830 c than the one in our solar system is to Earth.

So if you were standing on the planet looking up towards the sky, the sky would appear 1000 times brighter than the distant cosmos as it's seen from Earth. Which means that this asteroid belt would easily outshine the entire light that's put out by the Milky Way galaxy. Looking at this beautiful ring of dust and rocks would be the equivalent of looking at the very center of an orbiting comet, except that this debris ring would stretch brilliantly across the entire night sky.

On the downside, living within such a short distance from all of the rocky debris would pose significant safety issues (though the atmosphere and magnetic field would shield the surface from some of the debris). Still, with all that material, the threat of an asteroid or comet collision would be ever-present.

Could We Ever Visit?

HD 69830 c appears to be within the star's habitable zone (where liquid water would be able to exist without freezing or evaporating). However, more accurate data is needed on the star's luminosity to determine the exact measurements of the Goldilocks region of its parent star, and whether or not life (as we know it) could survive and thrive here. Moreover, as of 2006, it has been confirmed that three extrasolar planets comparable in size to Neptune orbit the star...which means that it might not be ideal for us (but one can always hope). These planets are all located inside of the debris disk. Thus, as you can imagine, the conditions would likely be extremely volatile for for any such planets.

And if you are looking for this amazing object, the orange dwarf star that HD 69830 c orbits can be found east of Sirius, southwest of Procyon, northeast of Delta Canis Majoris, and north of Zeta Puppis.