The Best of MRO's HiRISE Images 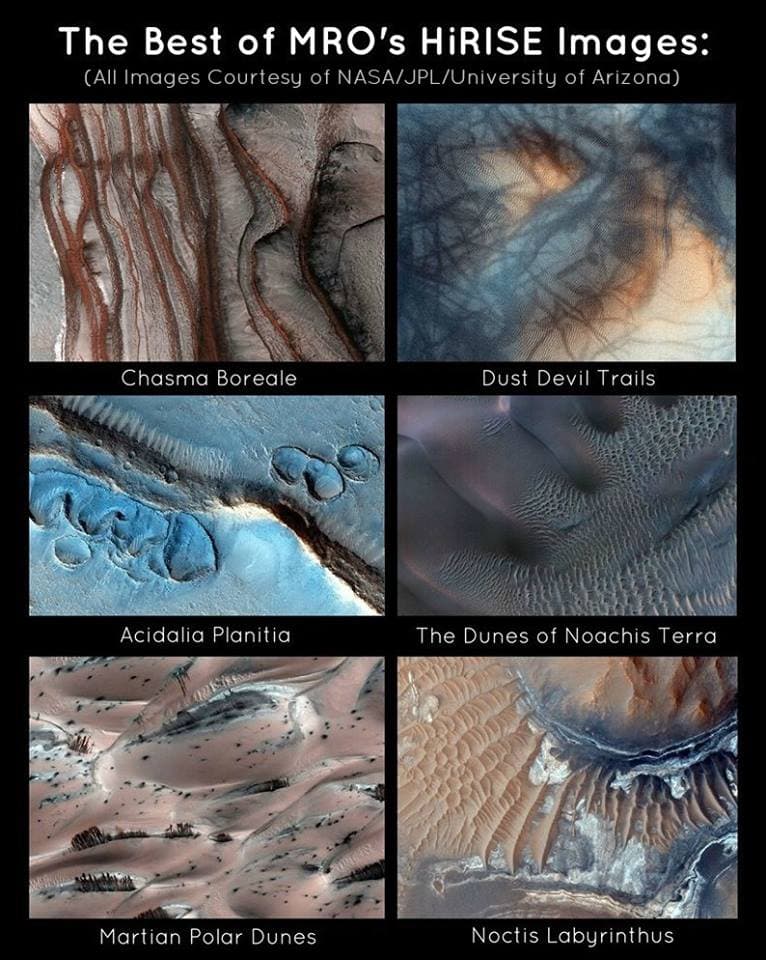 The Red Planet has the unfortunate reputation of being boring or uninteresting. I, for one, will admit that the planet doesn't hold my interest in the same way as the Saturnian moon, Titan, does. Lakes of liquid methane and ethane (with gasoline rain) trump the seemingly desolate planet of Mars anyway. (Though I appreciate the plethora of information we have access to thanks to exploration of Mars, which could, in turn, revolutionize our understanding of our own planet.) With that said, the HiRISE camera on-board NASA's Mars Reconnaissance Orbiter has captured some spectacular images of Mars recently, revealing tons of interesting features that make the planet much, much more fascinating aesthetically. This camera is the most powerful of the most powerful, capable of capturing the surface of the planet in unprecedented resolution.

Here, we have put together a collage of our favorites, with brief descriptions of exactly what we are looking at. (and the approximate location of each region).

This image shows the layered stack of dusty ice that can be found in the north pole of Mars. (In the canyon dubbed "Chasma Boreale") In particular, the terrain seen in the outermost right is thought to be made up of a significant portion of ice. Amazingly, some of this ice may be about 2 miles (3 km) thick. Whereas, the terrain from the left is made up mostly of rock. The surface colors have been manipulated to show the extent of the layers of the ice and rock deposits.

Here, we can see several dune gullies, which have been impacted by the fierce twisters that ravage the Red planet. Generally, the dust devils are created as warm air rises and cool air sinks, forming a twister. Subsequently, they uplift the layer of iron oxide, allowing us to see the dark grey color of the basalt underneath.

This particular image posed quite the mystery when it was first revealed, as we have no solid idea concerning the formation of these mysterious features, which are located at the southern edge of Acidalia Planitia. Some postulate that they could be evidence of glacial activity. Impact craters and wind formation have both been ruled out as potential catalysts for their existence.

4. THE DUNES OF NOACHIS TERRA:

These are the dunes of Noachis Terra, which are located inside an impact crater in the southern landmass on Mars. The image itself is enhanced to clearly show the intricacies of the ripples of sand, which comprise the entirety of the region. (Overall, this area extends about 6/10ths of a mile, or about 1 kilometer)

If we were to take another image of the area right NOW, it would likely look much different, as the dunes are shaped by wind direction and can vary based on the strength of the winds -- something that is a regular occurrence on Mars, as it is prone to planet-wide dust storms.

The Cydona face on mars has nothing on the patterns seen here, as they take pareidolia (the word used to describe the phenomenon of seeing faces and shapes in random objects) to a whole new level. If you look closely, it appears as if the surface of Mars is littered with hundreds of oddly familiar looking trees. Unfortunately, it's an illusion. What we are looking at is sections of dry ice that are covering the Martian polar dunes, which are somewhat pinkish in color. The light blue regions can be attributed to a coating of light frost. The "trees" are actually streaks, created during the summer months, when carbon dioxide ice begins to melt, sending the substance streaking down the mounds.

Here, we are looking at the iron-bearing sulfates and phyllosilicate (clay) minerals, located in the Noctis Labyrinthus region on Mars. This region bears some of the most prominent signs of Mars' active past with water, as smectite clay acts as a sponge, expanding and contracting in the presence of liquid water. The patterns seen here likely formed some 2 to 3 billion years ago