The Arcade In The Sky: An Image of Mimas and Tethys 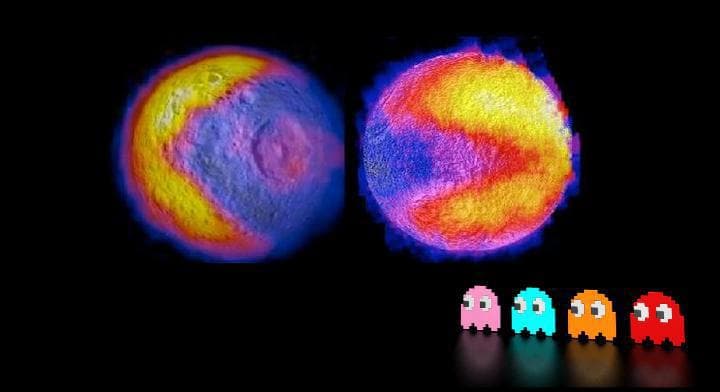 This image was sent back from the Cassini spacecraft in November of 2012. It shows that Saturn's moon Tethys (right) has a similar heat signature to that of Mimas (left). The images of Mimas were received back in 2010, and discovering a similar phenomenon on Tethys is rather exciting. "Finding a second Pac-Man in the Saturn system tells us the processes creating these Pac-Men are more widespread than previously thought," study leader Carly Howett said in a statement. "The Saturn system — and even the Jupiter system — could turn out to be a veritable arcade of these characters."

Of course, Pac-Man's enemies (Blinky, Pinky, Inky, and Clyde) were not a part of the original NASA image. Nonetheless, as you can see, the patterns on the moons cause them to look amazingly similar to the retro 1980's game Pac-Man. Ultimately, this pattern is not the work of some fancy game designers, but the natural processes of our solar system. Scientists believe that the shapes are caused by high-energy electrons bombarding the surface on the forward facing side of the moons. This creates a hard packed ice surface that warms slower in the day and cools slower at night.

"Studies at infrared wavelengths give us a tremendous amount of information about the processes that shape planets and moons," Cassini spectrometer principal investigator Mike Flasar of NASA's Goddard Space Flight Center in Greenbelt, Md., explained. "A result like this underscores just how powerful these observations are." With the discovery of the Pac-Men, the moon that looks like the Death Star, and an atmosphere that would allow humans to fly on Titan, I'd say that Saturn's moons are turning out to be a collection of exciting places to keep our eye on.

(unfortunately there were no ghosts seen on the moons,  and no sounds of 'waka waka' were reported)