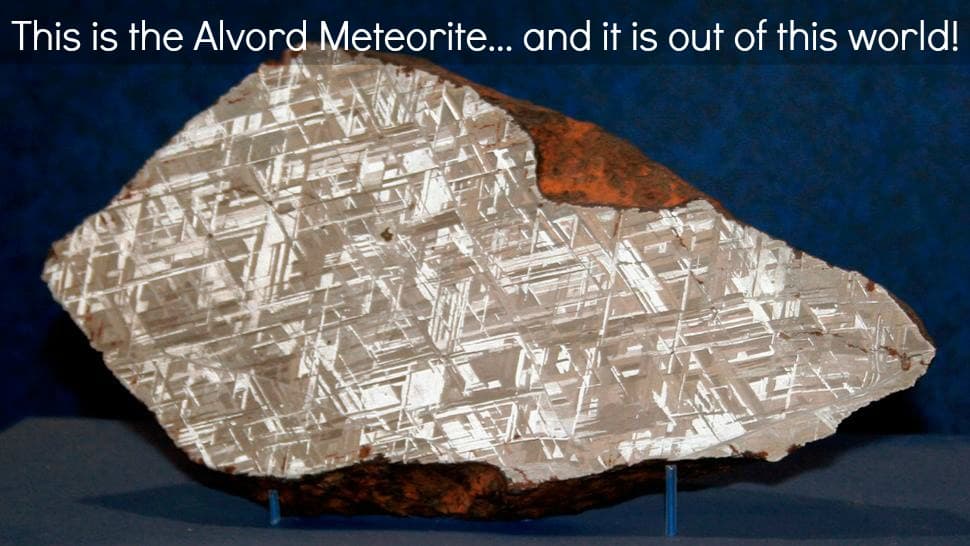 This meteorite is out of this world! (Literally)

On June 5th, 1976, the Alvord meteorite was found, located on a farm that is about 13 miles outside of Alvord, Iowa (in Lyon county). During the initial observation phase, it was discovered that the meteorite, which is an iron octahedrite (IVA) specimen, weighs in at 38.5 lbs (or 17.5 kg).

Overall, meteorites that contain high concentrations of iron and nickel are not uncommon, but some of them are quite exquisite when you crack them open (as seen here). The intricate system of cross-crossing that contributes to the utter beauty of the meteorite is something that is called the "Widmanstätten Pattern." This name was coined in 1808, and is meant to pay homage to Count Alois von Beckh Widmanstätten, who was the director of the Imperial Porcelain works in Vienna. He noticed differentiation as the various iron alloys oxidized at different rates; however, he did not publish his findings. The person responsible for publishing the discovery,  Carl von Schreibers, named the patter after Widmanstätten.

It is believed, however, that the actual discovery goes to  G. Thomson, who lived in Naples in 1804 (4 years earlier). Unfortunately, The the Napoleonic wars resulted in Thomson being cutoff from much of the scientific community. As a result, much of his work was misplaced or lost by carriers or in his flight from his home. Much of his work was not published until after his death.

The pattern generally occurs over the course of several million years, as the liquid metal that comprises the meteor begins to cool -- leaving behind the nickel-iron lattice that is out of this world (quite honestly, this is unlike anything seen on Earth).

So, what happened to this amazing specimen? The meteorite was eventually sold to the National Museum of Natural History, Smithsonian Institution. It sold for 800 American dollars (USD). However, a slab of the object was cut off and retained by the Van Engen family as a souvenir.

It has been reported that a curve on the “outside” of the meteorite suggested that the original body was about the size of about 18” in diameter. Although it was not discovered until 1976, it is believed that the meteorite actually arrived on our planet a bit earlier than this. The owner of the farm upon which this object was discovered asserts that he believes that it fell sometime in the 19-teens (the exact year and date is not known) when his father observed an explosion in the sky. At the time of its occurrence, he states that the flash was attributed  to an exploding meteorite.