Thanks to Cloud Chambers, You Can Actually See Uranium Emitting Radiation (video) 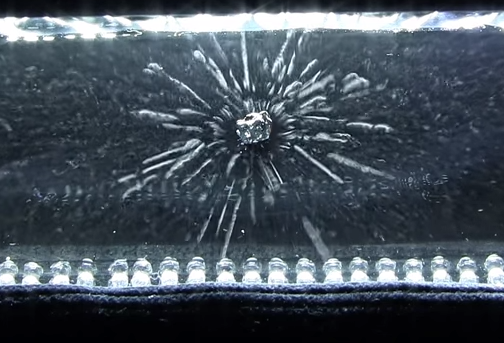 Radiation is the silent killer. It doesn't come screeching in and roar upon you. You can't see it stalking you. Rather, it floats in without warning. However, cloud chambers change all of that.

Cloud chambers are essentially glass containers that are completely sealed; they contain a material that condenses when it encounters a charged particle—ultimately allows us to see charged particles (or at least their fingerprint). To break it down a bit more, this container has liquid alcohol at the top, while alcohol vapors fills the rest of the volume. The system is maintained at a temperature of -40°C (which is also -40°F).

Ultimately, a majority of the vapor ends up condensing on the glass, which creates a mist on the glass; however, a small amount of the alcohol remains in vapor form above the cold condenser. This creates a layer of unstable sursaturated vapor that will condense if it encounters a charged particle. This is because, when a charged particle interacts with this vapor, it can knock electrons off the molecules forming ions. As Cloudylabs notes. "It causes the unstable alcohol vapor to condense around ions left behind by the travelling ionizing particle, the path of the particle in the matter is then revealed by a track composed of thousands droplets of alcohol."

Any charged particle is going to be visible in a cloud chamber. This video shows what it looks like when a Uranium mineral is placed into the chamber. You can literally see the radiation pouring out. Note that, towards the end (after 40 min), there isn't enough alcohol to make newer trails.

In some cases, a magnet is also generally put inside the machine, under the interaction surface, so during the whole video, a magnetic field is present and deflect the lightly charged particles (electrons).