Tesla Finally Releases Cybertruck ATV... But For Some Reason It's Child-Sized

No word on when adults will be able to zoom around on a Tesla ATV. 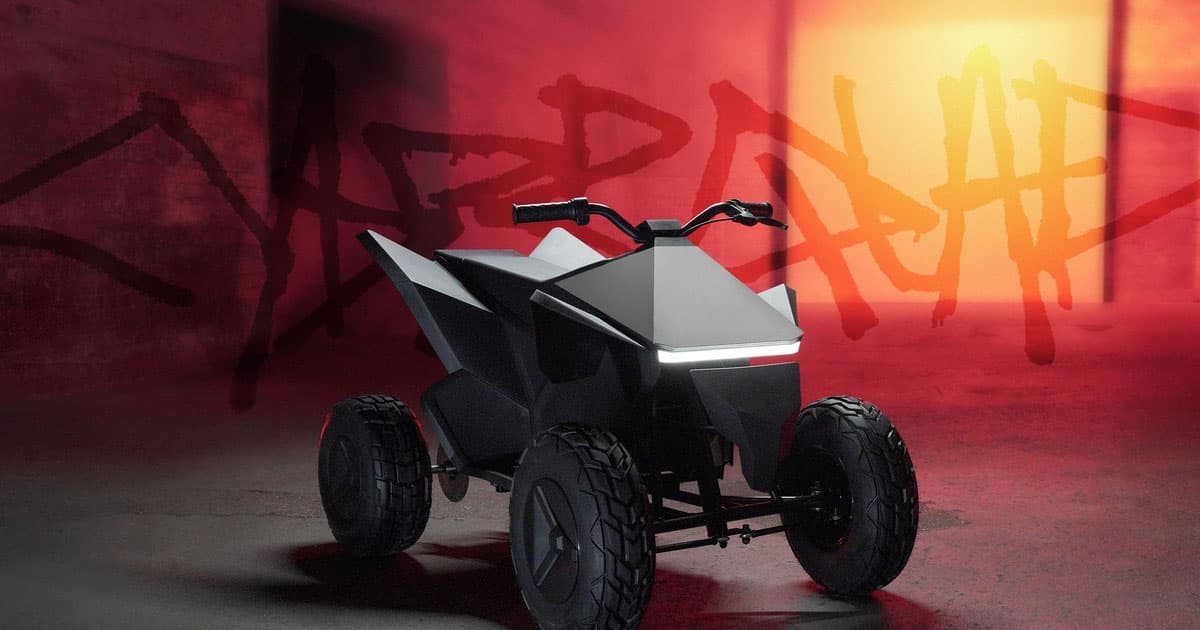 Tesla is, for some reason, selling a Cybertruck ATV for children before the release of one for adults — and it's already sold out, of course.

This kid-sized ATV, named the Cyberquad, is as futuristic-looking as its still-in-production parent, and when it's back in stock will retail at about $1,900.

Besides the comparatively-low price point, the Cyberquad diverges from other Tesla products in another key way: it requires self-assembly, Ikea-style, which may be why it's so relatively inexpensive. That, or the fact that, as the assembly instructions show, it was made not by Tesla itself but by the Radio Flyer toy company famed for its classic little red wagons — and which now also makes tiny, some-assembly-required Teslas for tykes that sell for about $500.

Earlier in 2021, Tesla fans who'd been awaiting news of the Cyberquad since CEO Elon Musk showed one on stage in 2019 were teased yet again — except that time, it was via a Hot Wheels collaboration.

In a Tesla-retweeted post, the company's chief designer Franz von Holzhausen claimed the ATV is "fun for kids and adults." But, to be fair, it's hard to imagine a grownup fitting comfortably on the back of one these things, given that it's, uh, clearly made for small children.

Indeed, in the video accompanying the Cyberquad announcement, von Holzhausen appears to be riding one of the kids' ATVs and seems mighty cramped.

Out riding with the kids on the Cyberquads! So much fun for kids and adults! @tesla pic.twitter.com/gq23GWsiDk

The adult-sized Cyberquad, for those keeping track, was first unveiled the same night as the Cybertruck, and features a similar angular design.

As Twitter one user noted, the new video does hint at a "full size" Cyberquad for adults, showing the Tesla design lead riding a larger version alongside some tots. Nobody knows, however, when or if it will be released — just like nobody knows when exactly the much-hyped Cybertruck will drop, either.

Earlier this fall, Musk said that the Cyberquad — the full-size one, we assume — will be the "least dangerous ATV" at a shareholder meeting, after not mentioning it for almost two years.

In the video trailer for the kids' version, which features the child models wearing a "Cybertruck" logo that looks an awful like the newly-resurged Stussy logo, the children are indeed wearing helmets, and Musk did suggest that his team is working to make "the ATV that won’t roll."

Thus far, however, he hasn't indicated exactly how he's going to make the kids' Cyberquad particularly safe, and if Tesla's track record is any indicator, parents may want to find another high-tech toy to lavish on their kids this holiday season.

And if you can't wait for the release of the full-size Cyberquad: This Guy Built a DIY Cyberquad and It's an Absolute Monster