Survey: 42% of Tesla Autopilot Drivers Think Their Cars Can Entirely Drive Themselves

"It’s possible that system design and marketing are adding to these misconceptions." 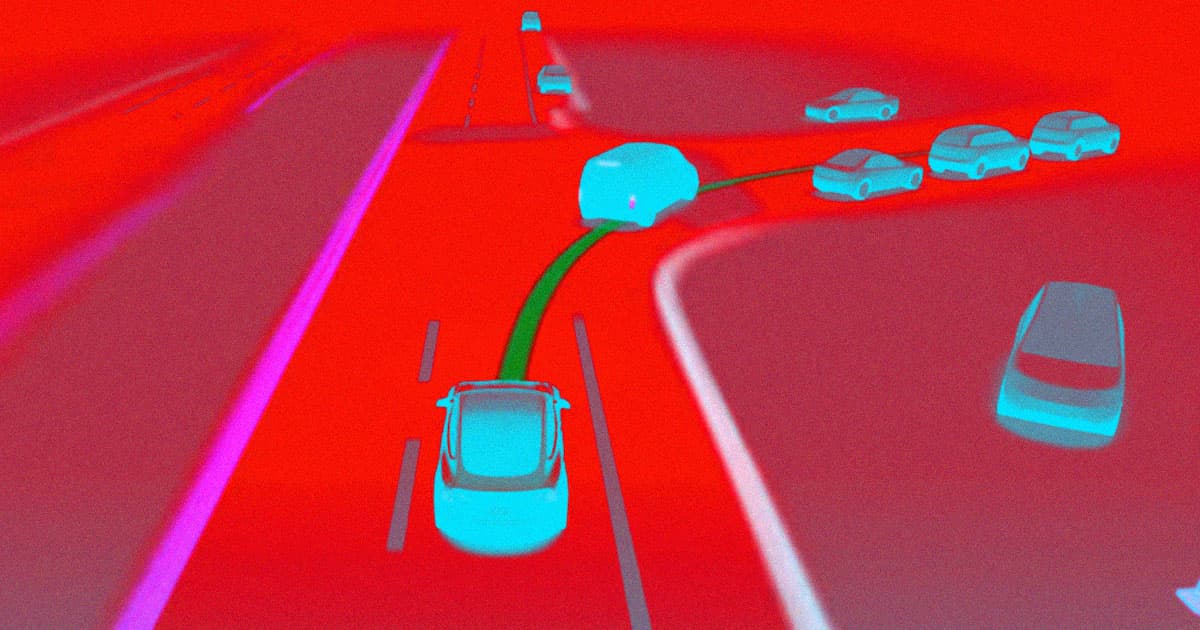 A large percentage of people who use Tesla's Autopilot driving assist system seem to think that the tech makes their car fully self-driving — even though the software is far from capable of it.

Per a new survey from the Insurance Institute for Highway Safety (IIHS), a whopping 42 percent of Tesla Autopilot drivers said that they feel "comfortable treating their vehicles as fully self-driving." That's so bizarre that we can barely believe it — Autopilot can keep your car in a lane with simple braking and acceleration, but it's nowhere near a full self-driving system. In fact, even Tesla's somewhat more advanced Full Self-Driving (FSD) package, which drivers weren't polled on in the IIHS study, is still very much in beta testing.

"The big-picture message here," IIHS President David Harkey said in the organization's press release, "is that the early adopters of these systems still have a poor understanding of the technology’s limits."

Those limits, to be blunt, include the fact that Autopilot mode requires drivers to be paying attention and driving — albeit with assistance from the vehicle's software.

"It’s possible that system design and marketing are adding to these misconceptions," Harkey said, alluding to widespread criticism that Tesla has overstated the capabilities of its Autopilot and FSD tech.

The IIHS survey also found that 53 percent of people who use Cadillac's Super Cruise assisted driving software are chill with treating their vehicles as self-driving, while only 12 percent of those who use Nissan/Infiniti's ProPILOT Assist software feel the same.

As Harkey noted, there appear to be "clear differences among the three owner populations" as to what their cars are capable of — and the survey's findings seem to back that up, too.

Notably, 40 percent of the Tesla and Cadillac assisted driving users said that they had been "locked out" of their vehicles, both types of which have lockout features that switch off or otherwise suspend the vehicles if drivers don't meet failsafe criteria.

While the survey notes that "some of those drivers confused a temporary suspension of the feature with the lockout procedure," that high percentage "nevertheless suggest[s] that many drivers failed to respond to warnings intended to ensure they were paying attention to the road or that they repeatedly violated the operating parameters often enough to trigger the lockout."

Nissan/Infiniti assisted driving users, on the other hand, don't have lockout failsafes to contend with — but they do, per the survey, have attention reminders, and a high percentage of the users questions "reported that they had never even received an attention reminder."

There's clearly something going on with Tesla and Cadillac owners, in other words — and we have a bad feeling that this could be a sign of things to come.

Read This Next
It Was the Tesla
Manslaughter Case Has a Strange Twist: Tesla That Killed Couple Was on Autopilot
Red Light
Godfather of Self-Driving Cars Says the Tech Is Going Nowhere
Musk Antics
Elon Musk Has a Big Problem on His Hands
Please Elon
Why These Tesla Owners Are Going on a Hunger Strike Against Tesla
Streisand Effect
Hurry Up and Watch These Videos Tesla Wants Removed From the Internet
More on Advanced Transport
Pepsi Semi
Friday on the byte
Tesla Semi Truck Drives 500 Miles Fully Loaded
Out With a Bang
Tuesday on the byte
Driver Says His Ford F-150 Lightning Made a "Loud Boom" and Died When He Plugged It In
Deep in a Hole
Tuesday on the byte
Something Very Weird Is Going on at Elon Musk's Boring Company
READ MORE STORIES ABOUT / Advanced Transport
Keep up.
Subscribe to our daily newsletter to keep in touch with the subjects shaping our future.
+Social+Newsletter
TopicsAbout UsContact Us
Copyright ©, Camden Media Inc All Rights Reserved. See our User Agreement, Privacy Policy and Data Use Policy. The material on this site may not be reproduced, distributed, transmitted, cached or otherwise used, except with prior written permission of Futurism. Articles may contain affiliate links which enable us to share in the revenue of any purchases made.
Fonts by Typekit and Monotype.