As Tensions Soar With Russia, NASA Buys a Ton of SpaceX Astronaut Launches

If there's a winner in this conflict, it's SpaceX. 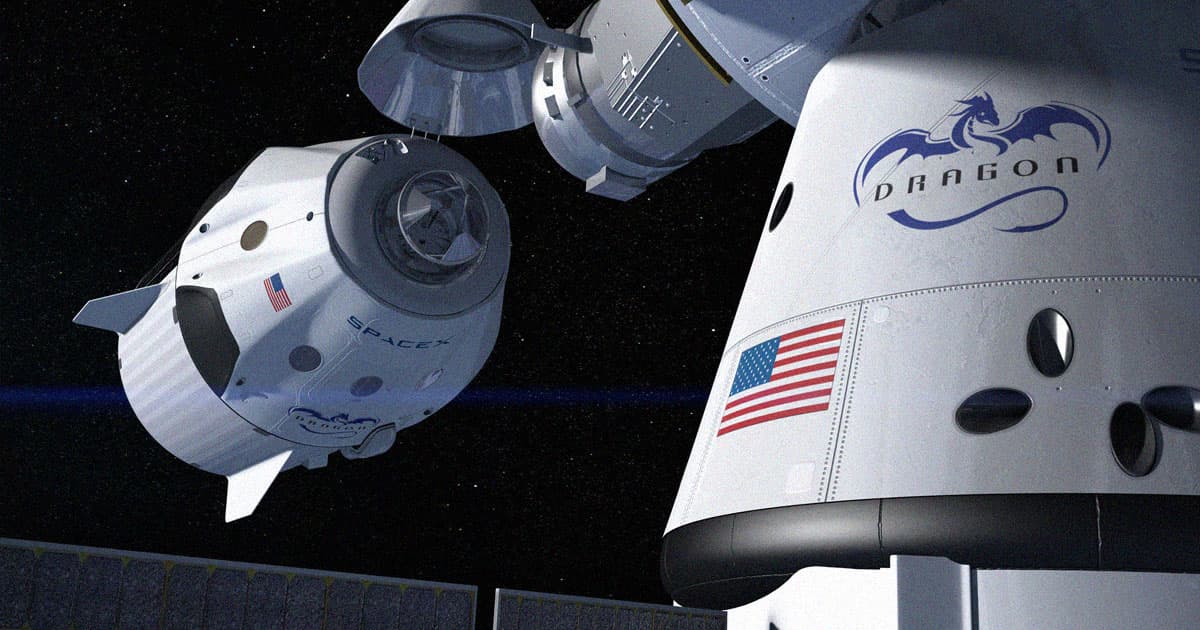 NASA has awarded SpaceX contracts for three more Crew Dragon trips to the International Space Station, which brings the total number of crewed missions to the outpost for the company from six to nine, including the three successful operational trips from the last two years.

The newly signed contract is an extension of the agency's Crew Transportation Capability (CCtCap) contract, and will allow "NASA to maintain an uninterrupted US capability for human access to the space station," according to an announcement.

The timing of the announcement is noteworthy, as well. While NASA makes no mention of Russia's invasion of Ukraine — and the subsequent breakdown of international space relations — the news does seem to demonstrate that the space agency is serious about relying on American-made rockets for the foreseeable future.

Ever since retiring the Space Shuttle in 2011, NASA has had to rely on Russian-made Soyuz spacecraft to shuttle astronauts to and from the space station.

After retiring the Space Shuttle in 2011, NASA had to rely on Russian-made Soyuz spacecraft to shuttle astronauts to and from the space station.

But starting in 2020, SpaceX's Crew Dragon spacecraft has allowed NASA to launch its astronauts to the station from US soil, greatly reducing its reliance on Russia.

So far, SpaceX has successfully flown astronauts to the ISS during three operational missions and one crewed test flight. The new contract means SpaceX will fly astronauts at least six more times.

Given Russia's invasion and the international community distancing itself as a result, it's worth noting that SpaceX has given NASA a much better bargaining position in the face of the conflict.

"It’s critical we begin to secure additional flights to the space station now so we are ready as these missions are needed to maintain a US presence on station," Kathy Lueders, head of NASA's space operations mission directorate, wrote in a December notice of intent to modify the contract.

Lueders also pointed out at the time that SpaceX is the only company in the US actually certified to fly astronauts to the space station.

NASA has signaled it is willing to invest billions of dollars in SpaceX to keep operations going on board the aging orbital outpost. As TechCrunch points out, the CCtCap contract is now worth $3.49 billion — a considerable sum, even to SpaceX.

With Soyuz spacecraft increasingly out of the question, NASA's efforts to establish a commercial crew program appear to be paying off, and just in the nick of time.

More on Crew Dragon: There’s a Reason NASA Doesn’t Have to Submit to Russia: SpaceX

Read This Next
Futurism
New Development Is Extremely Bad News for SpaceX
Don't let the door hit you
Elon Musk Lobs Casual Space Station Burn at Moscow
Moon Vacation
NASA Finds Holes on the Moon Where It's Always a Comfortable Temperature
Buh Bye
Russia Says It's Definitely Quitting the ISS But Doesn't Say When Exactly
Muellholland Drive
SpaceX Defector Is Aiming to Land on Mars Before Elon Musk
More on Off World
About Damn Time
2:30 PM on the byte
SpaceX Is about to Launch the First Ever Astronaut Who's an Indigenous Woman
Don't Panic
Yesterday on the byte
Cosmonaut Told to "Drop Everything" and Return to Airlock
It's Happening
Yesterday on the byte
NASA Rolls Mega Moon Rocket Onto Launchpad
READ MORE STORIES ABOUT / Off World
Keep up.
Subscribe to our daily newsletter to keep in touch with the subjects shaping our future.
+Social+Newsletter
TopicsAbout UsContact Us
Copyright ©, Camden Media Inc All Rights Reserved. See our User Agreement, Privacy Policy and Data Use Policy. The material on this site may not be reproduced, distributed, transmitted, cached or otherwise used, except with prior written permission of Futurism. Fonts by Typekit and Monotype.