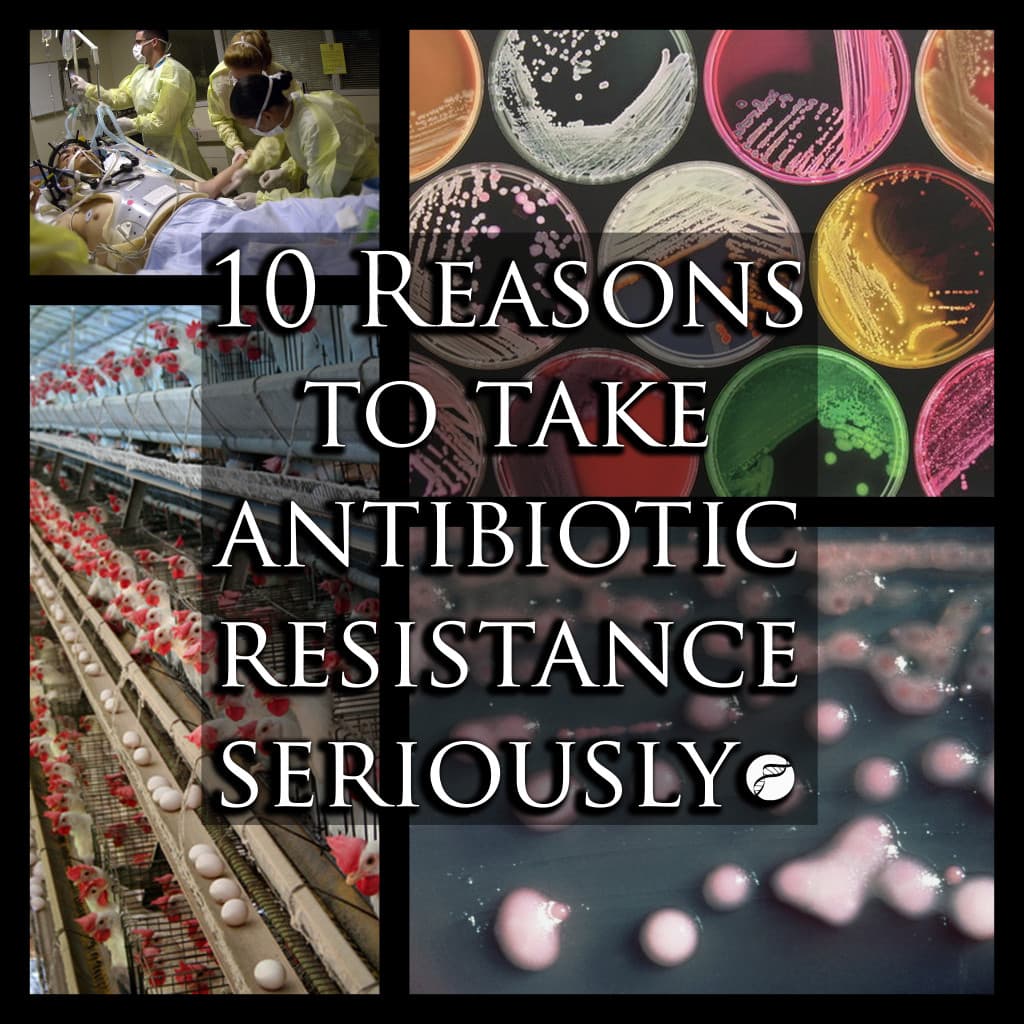 The discovery of penicillin's bacterial fighting power in 1928 was a game changer. For the first time in history, infections could be fought with more effective medicinal weaponry than bloodletting, leeches, and crossed fingers. Like never before, we could really fight back. Unfortunately, that is all changing. Our power to treat infection is slipping from our hands. What's worse, so many of us are completely oblivious to the situation and are helping perpetuate the problem.

Below is a (partial) list of reasons to take this subject seriously. Hopefully, it will encourage you  to contact your legislator to make changes, to take antibiotics only when you need them, to finish your full course of prescribed antibiotics, and to consider whether alternatives to antibiotic-fed meat and dairy are right for you.

1.  According to the Centers for Disease Control, 23,000 people die every year because of antibiotic-resistant infections. What's worse, superbugs are on the rise, including strains of tuberculosis that are totally drug-resistant.  New Zealand just announced its first death from a completely drug-resistant bacterial infection.

2. The majority of meat you buy at your supermarket has bacteria living on it that is resistant to at least one antibiotic.

3. Eighty percent of all antibiotics in the United States are used on animals.  Four times more antibiotics are fed to animals than are fed to humans. That's 29.9 million pounds of antibiotics used on healthy animals a year. Why do they use so much antibiotics? To boost productivity. Double-digit weight boosts can be seen when you feed antibiotics to livestock. Additionally,  these drugs suppress an immune response that breaks down muscle tissue.

Economically, it makes a great deal of sense to feed antibiotics to livestock non-therapeutically (that is to say, when they are not sick). Medically, however, it's one of the worst practices we engage in. Say you wanted to create a superbug that was incurable, how would you do it? You might use low levels of antibiotics for an extended period of time on vast quantities of hosts, like animals. Over time, you would increase the antibiotic dosage and introduce increasingly powerful antibiotics. Years later, you would have an unstoppable bug. While I highly doubt any malicious intent, this is the exact procedure carried out on a massive scale within the livestock industry of the world.

4. 25-75% of antibiotics fed to livestock makes it through their gut totally unaltered (Kümmerer, 2004).  This makes a bad situation even worse.  Those antibiotics enter the soil, aquifer, rivers, and streams.

5. Antibiotic resistance is transferable between bacterial individuals and bacterial species. Bacteria have a number of strategies to receive DNA from other individuals and species. For starters, they can pick up loose pieces of DNA from their environment (transformation).  This is much for common than might you think.  Any time a cell dies it leaves its DNA behind for opportunistic bacteria.  Bacteria can also receive DNA from other bacteria carried by viruses that have accidentally packaged up bacterial DNA, rather than viral DNA (transduction).   Lastly, bacteria can receive genetic information from another bacteria via conjugation, which involves attaching bacteria by a tube called a pillus.

6. Antibiotic resistance often springs from pre-existing adaptations, making it easy for antibiotic resistant bacteria to evolve further.   Many bacteria already have adaptations to deal with toxins within their environment, these adaptions can include heavy metals and toxins from other bacteria and fungi (many of the antibiotics we use were found in nature) (Smith, 1967; Stepanauskas, 2005; Aminov, 2007).  Resistance to these environmental threats often comes on easily transferable DNA rings called plasmids, transposons, and integrons.

8.  It's estimated that treating antibiotic resistant microbes costs upwards of 55 billion dollars in the U.S. alone.

9.  It costs between .8-1.7 billion U.S. $ to bring a new antibiotic to market (Stanton, 2013).  Why does it cost so much?  Partially because we are running out of options.  There are only so many differences between bacterial cells and human cells that we can exploit (this is how antibiotics work.  They interfere with the biomolecular machinery found in bacteria but not humans/eukaryotes, like cell walls, different ribosomes, different polymerases, etc.)  These two obstacles (cost and difficulty) have resulted in a 40 year pause in antibiotic discovery for Gram negative bacteria (a group of bacteria that include Salmonella and E.coli).

10. If we do nothing, we lose the ability to successfully have major surgery, low risk births, to treat major wounds, and to protect those with lowered immune systems.  "Before the antibiotic era, 5 women died out of every 1,000 who gave birth. One out of every nine skin infections killed. Three out of every 10 people who got pneumonia died from it."