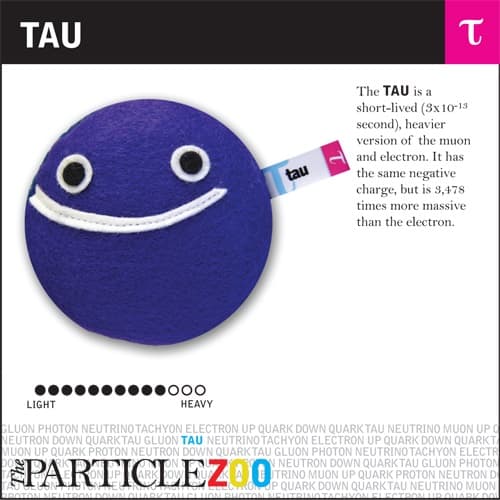 We all like hearing about the biggest and the smallest, the heaviest and the lightest, as these categories represent the extremes of the universe...and they usually they are great for comparisons. Meet the heaviest of all the leptons, the Tauon (also known as the Tau Lepton or Tau Particle). The Tau lepton has a mass of 1777 MeV/c^2, to put this lepton into perspective, it is several thousand times heavier than the smallest lepton - the electron - and is even heavier than a proton. But before we get into a thorough discussion of these particles, let's have a bit of background in how particles function, just for a bit of context.

Virtually all of the visible matter in the universe is made up of only several particles.  The standard model of particle physics (a theory related to the electromagnetic, weak, and strong nuclear interactions that outlines the dynamics of the known subatomic particles) contains many particles, but only a few of these make matter. It appears that the universe favours the smaller of the particles; the smallest lepton, the electron, and the two smaller of the quarks (the Up and Down). From these three particles you, me, the the Earth, the Sun... everything in the cosmos is made! The tauon then, being so large, isn't favoured.

Unfortunately, this means that this big guy doesn't exist for long in the universe. In fact, it only exists for 2.95x10^-13 seconds or 295 femtoseconds (one femtosecond is one quadrillionth [one millionth of one billionth] of a second). But the lepton is actually able to break down into a hadron with the use of a W Boson, or a quark anti-quark pair, or lepton anti-lepton pair, through the use of a Z Boson. But don't feel too bad about its paltry existence, the Tau particle does have a few claims to fame. For example, the decay of the Tau particle has been used in the detection of the Higgs Boson, but ultimately the Higgs wasn't found through this method (alas); however, it was able to determine that the Higgs Boson should lie below the 160 GeV region. As the Tauon is the most unstable of all the leptons, as it is the largest, it doesn't occur naturally in the universe like the electron.

The Tauon, which exists for such a short period of time, only exists in places where there is high energy particle collisions like in the core of stars, supernova, black holes, neutron stars, or our humble particle accelerators. As previously mentioned, it has a mass of approximately 1777 MeV/c^2, and as it is a lepton it is negatively charged and has a spin of 1/2. Like other particles, it has an anti-lepton, which is a 1/2 spin but is positively charged (this is known as the antitau). The Tau Neutrino is also the largest of the neutrinos with a mass of ~15.5 MeV/c^2 which is still some 30 times the mass of an electron and incredibly larger than the electron neutrino.

So, to Sum the Tauon:

It is the heaviest lepton in the whole particle zoo at nearly 3,500 times larger than the smallest of the lepton, the electron. The tau neutrino is the heaviest of the neutrino family and is heavier than an electron! Compared to the other neutrinos, the tau neutrino is truly a massive particle. Tauons are large enough that they are actually capable of decaying into hadrons, quark/anti-quark pairs and lepton pairs. Because of how heavy they are they are incredibly unstable and tend to decay very quickly.