TALISE: A Mission to Titan 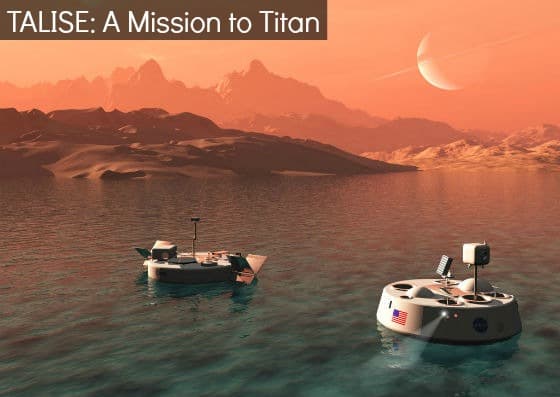 Since we've sent man to the moon, a machine to Mars with another spacecraft launched to explore Pluto, the Kuiper Belt and two that are heading into interstellar space, some scientists think it's the right time to land a boat on the largest (and most complex) moon of the beautiful ringed planet of our solar system, Saturn.

Located at Titan's north pole, Ligeia Mare measures roughly 260 miles (420 kilometers) across with a surface area of about 126,000 km^2 and a shoreline over 1240 miles (2000 km) in length. It was the initial target of NASA's proposed Titan Mare Explorer, which aimed to drop a flotation device in the lake, but the TME lost out to Insight — a probe that's scheduled to be launched in 2016 to study the core of the Red Planet.

The boat-probe that lands in Ligeia Mare would be propelled by wheels, paddles or screws. After successfully landing in the lake, it would set sail for Titan's cost whilst making scientific measurements with equipment on board as it makes its way to the targeted spot. This primary phase of the proposed mission would be expected to last between six months and an entire year.

“The main innovation in TALISE is the propulsion system,” says Igone Urdampilleta, a member of the TALISE team. “This allows the probe to move, under control, from the landing site in the lake, to the closest shore. The displacement capability would achieve the obtaining of liquid and solid samples from several scientific interesting locations on Titan’s surface such as the landing-place, along the route towards the shore and finally at the shoreline.”

In the event that TALISE successfully lands in Titan's lake with all of the on board instruments working, it wouldn't be the first probe to visit the distant moon. The Cassini spacecraft was launched in 1997 carrying ESA's Huygens probe, which landed on Titan's surface on January 14th, 2005 transmitting data for the one hour and ten minutes that it was active on solid ground. It was those observations paired with the ones that have since been made by Cassini that revealed the extensive lakes and oceans of methane and ethane on Titan. Since Titan's environment is much cooler than the climate on Earth, it can't support life as we know it, but astrobiologists are still very interested in the moon since it's probably the most Earth-like place in our solar system — it even has a thick atmosphere and experiences seasons.

TALISE is currently being developed by the primary team with a partnership between SENER (a private engineering and technology group) along with the Centro de Astrobiologia in Spain. The feasibility of the mission is currently being debated before it will transition from a "phase 0" study into a terminologically and financially feasible proposal moving forward.