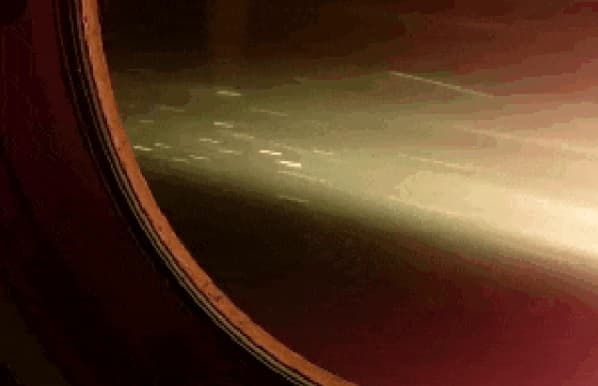 The invisible boundary that separates Earth from space, called the Karman Line, stands around 62 miles (100 kilometers) above Earth's surface. As innocuous as it sounds, this boundary isn't like crossing the state line; it's violent, fiery and downright harrowing for astronauts and spacecrafts alike.

In order for a ship to make the return trip to Earth, it must survive temperatures exceeding 3,000° F (1,650°C), while traveling at about 25 times the speed of sound. (These days, the trip from the International Space Station (ISS) to Earth (268 miles/431 km in all) can be made in about 3.5 hours That might sound like a disproportionately long amount of time, but there are multiple steps involved.)

Now, the process has been revealed in a new GIF documenting the atmospheric descent of the manned Soyuz Spacecraft, which hosted cosmonauts Oleg Kotov and Sergey Ryazansky, and astronaut Michael Hopkins, at the time.

In addition to the clear dangers astronauts face during the descent (mostly related to potential mechanical problems), the force of gravity alone could cause extreme bodily harm. To minimize the risk, the seats are equipped with shock absorbers, and passengers are instructed to lay on their side (in a position that is perpendicular to the spine). Even then, many other issues could arise.

It's much worse for spacecrafts themselves. At the most intense point, the outside of the ship reaches temperatures high enough to melt iron (friction helps too). Then, during the deceleration phase, the ship feels a gravitational pull approximately 7 times stronger than that felt on Earth.

So, how do they hold up? It mostly boils down to the way in which we protect shuttles from the searing heat. Soyuz, in particular, has an ablative heat shield. Think of it as an eco-friendly device; it sacrifices itself to protect the capsule, burning up before it even reaches Earth's surface.

These measures are highly effective most of the time, but they can be rendered moot by something as small as a piece of foam. Unfortunately, we learned this first hand when Columbia disintegrated during reentry in 2003, killing all 7 people onboard. The investigation revealed that foam damaged the shuttle's thermal protection system during launch.