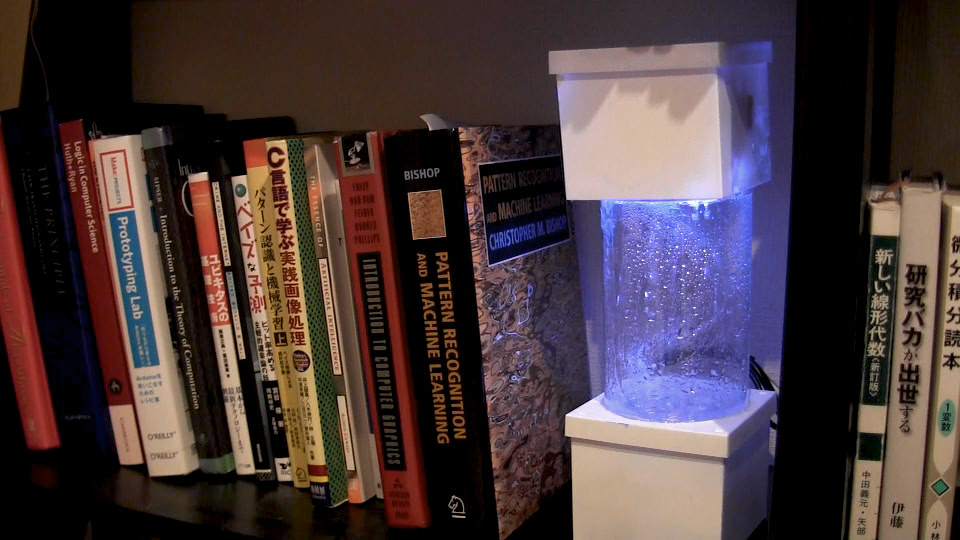 Forget Christmas, Summer is the most wonderful time of the year. Not only can you shed all those bulky coats and sweaters (and, you know, go outside without freezing to death), but summer brings trips to the lake and barbecues. However, nothing puts a damper on fun quite like bad weather can. Admit it, checking the forecast is one of the last things a person wants to do before soaking up ray from the Sun.

It's possible that someday, you won't have to check the weather forecast to know what mother nature has in store for you each day. A cool gizmo would remove the need (with added flair).

Designed by Ken Kawamoto (a Japanese software engineer with Google), the Tempescope device is a table-top ambient weather display that can simulate the weather indoors—it can't simulate the Sun itself or anything (someone should get to work on that), but things like sunshine, clouds, rain and lightning are applicable. He notes that it also reproduces "various colors of the sky, giving visual cues for the time of day."

In order to produce an accurate, up-to-date prediction of the weather, it checks your local forecast on an hourly basis, and adjusts its appearance accordingly; It can even tell you what the forecast predicts for tomorrow (not just for your location, but pretty much anywhere in the world). Additionally, it is so precise, it can tell you when the Sun rose the previous day, when clouds or lightning appeared, and when they dissipated (the same can be predicted for the future, but weather forecasting isn't an exact science—there is no crystal ball). Either the events of the day can unfold in real time, or they can be sped up for effect.

Unfortunately, the Tempescope is not available for purchase currently—despite the fact that the constituent parts are surprisingly basic, running on a plastic container, a bluetooth/USB device, LED, pumps, an ultrasound diffuser, and an arduino board (in conjunction with a computer, of course)—but Kawamoto plans on launching a kickstarter campaign by the end of the year, which may ultimately lead to mass production. However, if you are thrifty and don't want to wait, he has made the open source code available on Github (you can also find it here).

He explains which part does what, and how they work together to simulate the weather on his blog:

Would you be interested in owning one of these? Let Kawamoto know.