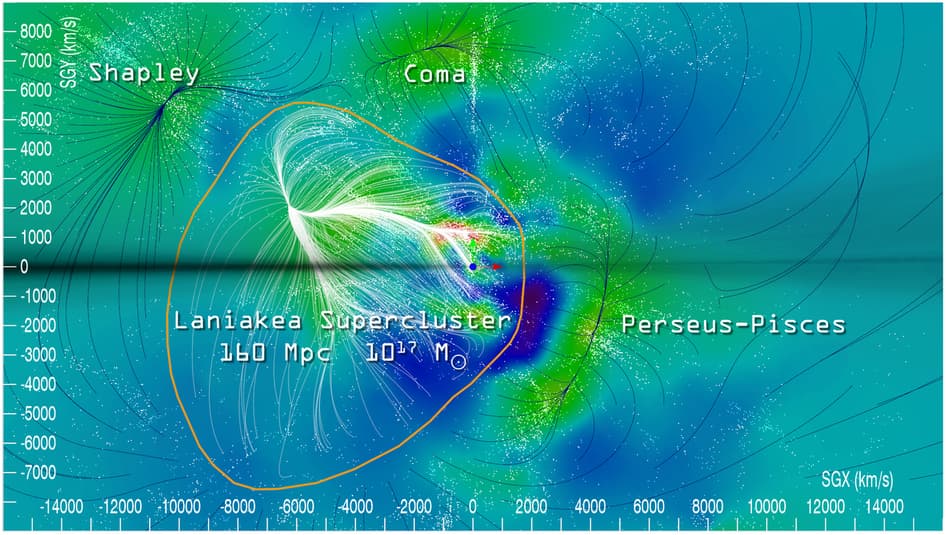 A "supercluster" is a term used to describe an enormous cluster of galaxies. The idea follows a logical progression of gravitational binding. To use the Milky Way as an example, we exist in a group of galaxies called The Local Group. We are reasonably certain that this (and other galaxy clusters) will eventually merge together to become a single galaxy. For the Local Group, one of the cornerstones for this eventual merger is already under way, with the merger of the two heavyweights in this cluster; the Milky Way and Andromeda.

Using the same logic, is it possible that there are superclusters of galaxies, made up of smaller clusters, that will eventually merge into one uber-super-horrendously-massive galaxy?

Not according to the astrophysicist Ethan Siegel. He claims that the term "supercluster" is meaningless. On his blog, Siegal explains:

Structures containing not only thousands but millions or even billions of galaxies, structures spanning billions or even tens of billions of light years in size, could be gravitationally bound to one another, eventually contracting-and-merging to form a single galaxy so large it would rival the presently observable Universe!

If our Universe only had normal matter, we'd have some serious explaining to do. But we don't live in a Universe made up exclusively of matter, normal or dark. We live in a Universe that's dominated by dark energy, or an energy intrinsic to space itself.

And that changes everything.

Because for the first eight-or-so billion years of the Universe's existence, structures grew and grew, on all scales. Galaxies formed and merged together, groups and clusters formed and attracted one another, with many merging together, and structures on even larger scales began to form, as gravitational attraction began to draw these structure towards one another against the expansion of the Universe.

But about six billion years ago, the Universe began to accelerate. And that means that whatever structures weren't already gravitationally bound together, never would be. Instead, the accelerated expansion of the Universe would work to drive them apart.

That's exactly what we see happening, mind you. We can still see the gravitational effects of these giant groups, clusters and tandems of clusters, and they still look like a supercluster when we consider galaxy counts and relative densities, but the reality is that these giant collections of galaxy clusters that we call superclusters are not bound structures, and will never shrink in size or have their member clusters merge together.

Thanks to the properties of the Universe we live in — thanks to dark energy, or the fact that space itself has an intrinsic, non-zero energy — what we currently call "superclusters" aren't typically gravitationally bound together, and will instead fly apart as time continues to go on in our accelerating Universe.