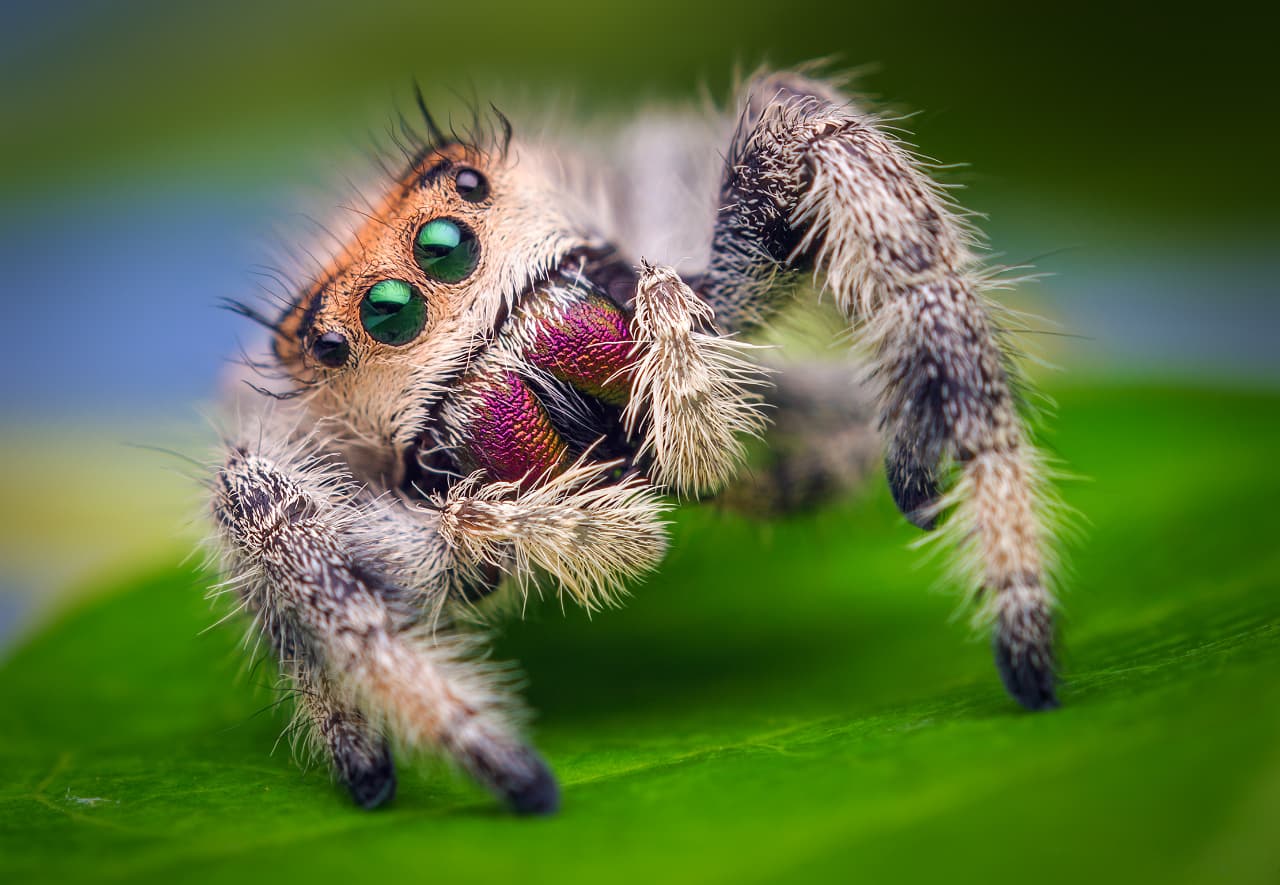 At Macquarie University in Sydney, Australia 56 female jumping spiders were allowed a unique opportunity: the chance to experience virtual reality.

Biologists Tina Peckmezian and Phillip W. Taylor didn't outfit each spider with an oculus rift. Instead, they combined multiple technologies, including 3D printing, to create a small-scale virtual reality setup. The goal was to assess whether behavior learned in the real world could be transferred to the virtual environment.

Jumping spiders were chosen over other species because of their unique ocular setup. They have four pairs of specialized eyes that each have their own single lens. Because of this, they have incredible depth perception, can see in color, and have an impressive spatial sense, in relation to their eye size.

A Cold Set Up

Before the spiders were immersed in a virtual world, their real world movements were also studied so that comparisons could be made. Once this data was gathered, it was time to experiment.

Spiders were first put into a relaxed state through a mild stint in refrigeration. After getting nice and chilly, they were set on a cooled granite block. Tiny magnets were affixed to their bodies with a dot of glue, avoiding the eyes, of course.

After a 24 hour recovery period, the spiders were ready to enter virtual reality. The magnets allowed the spiders to be lifted onto tiny 3D printed treadmills. The video projection began as the spiders settled in for an adventure.

The spiders' neurological readings were studied as they explored the virtual world. The projected scenes were set against a flat ground plane that had texture and color similar to tree bark.

In the first experiment, spiders were stimulated by 18 beacons of randomly generated light. In another, the virtual world was empty. In the empty world, the spiders were less active than those in the environment with the light.

In another scenario, spiders encountered either a red pillar of light, a green cross of light, or no light/symbol placed near their nest site in the real world. Once in the virtual world, the spiders who had encountered the beacons gravitated toward them. The spiders even showed memory recall from game to game. If they had seen a symbol in a previous game, they would gravitate to it again. The situations were randomly generated.

The program was a closed-loop virtual reality system that updated in real time in response to the spider's movements. In past experiments, the video playback was limited to open loop systems, which resulted in a less realistic situation.

The Future of Virtual Reality in Science

The virtual reality setting allowed researchers to test animals in a situation close to their natural environment while still having control over the environmental variables. The researchers' findings were published in the article "A Virtual Reality Paradigm for the Study of Visually Mediated Behavior and Cognition in Spiders" in Animal Behavior.

The article highlights the importance of the conclusion that real world experiences influence behavior in virtual reality. This means that virtual reality can be utilized as a great tool for future research.

"I can appreciate that the idea of spiders wandering around through virtual space may sound like science fiction, but virtual reality technology has been an incredible tool in the behavioral and neurosciences. A common goal for animal behavior researchers is to find a middle ground between providing realistic, ecologically relevant experimental conditions [and] conditions that can be precisely controlled and reproduced across trials.”

Although right now the university's focus is spiders, it will be interesting to see what other creatures they're able to take into the virtual world.