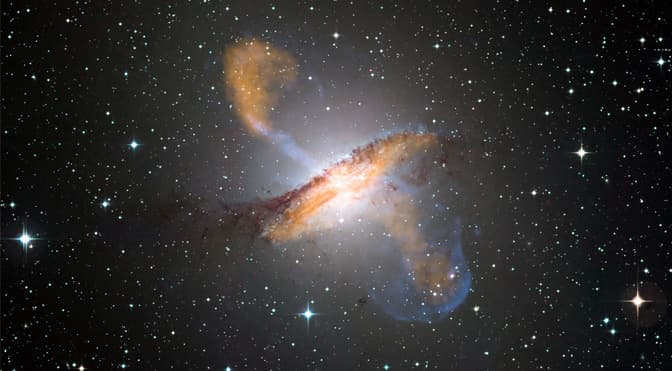 Jupiter's Great Red Spot is quite impressive. With the ability to consume our planet twice over, it is easily one of the largest storms in our solar systems. If it's size is not enough, wind speeds around the edge of this beast reach over 250 mph (400 km/h). If you’re a wind surfer, this velocity might sound enticing. But consider your arms, legs, and head flailing about sporadically, flapping like flags in the wind. Not so fun.

As impressive as this might sound, it doesn't hold a candle to the truly enormous storms out in the cosmos.

Five years ago, an enormous structure was discovered by astronomers. It appeared as a gamma-ray glow, shining brightly towards the heart of the Milky Way. Since this initial observation, scientists observed X-ray and radio waves emanating from the structure, along with billowing clouds of gas that literally tower over our galaxy, stretching out some 30,000 light-years above and below the plane of the Milky Way. For comparison, our solar system is a mere 2 light-years wide, which means than this chaotic mess could consume us thousands of times over.

What could cause such a massive outpouring? Ultimately, there are two primary theories. The first is that there was an intense eruption of star births at the center of our galaxy (which would have resulted in a number of supernova blasts). The second suggests that our central black hole, Sagittarius A*, had an enormous eruption, which may have been caused by a group of stars (carrying uncountable worlds) simultaneously falling into the black hole. Now, thanks to Hubble, scientists are getting a better look at this extreme storm and may pin down exactly what caused it.

NASA's Hubble Space Telescope was used to measure the velocity and composition of the mysterious lobes, and astronomers just announced the true breadth and power of this amazing explosion. As it turns out, winds flying out from this beast are traveling at a staggering 2 million miles per and hour (3.2 million kmh). For comparison, solar flares erupt from our Sun at mind-blowing speeds, but nothing close to what's going on around this black hole. When a solar storm occurs, particles travel out at a (comparatively) slow 78,000 mph (125,000 kmh).

If that's not enough, this cosmic hurricane is also amazingly hot.  The temperature at the edge of the expanding gas cloud was measured at approximately 17,500 degrees Fahrenheit (9,700 degrees Celsius). But as hot as this is (it would be bad news for our little planet), it is much cooler than most of the super-hot gas that characterizes this structure, which is thought to be at about 18 million degrees Fahrenheit (10 million degrees Celsius). The difference in temperature is believed to result from interstellar gas being swept up into the storm.

The scientists also detected silicon, carbon, and aluminum, which indicates that the gas represents the fossil remnants of star formation.

As previously mentioned, ultimately, this new data could help astronomers conclusively determine what caused the outburst. Andrew Fox, of the Space Telescope Science Institute in Baltimore, Maryland, and lead researcher of the study, notes the significance of the storm and the newly acquired data:  "When you look at the centers of other galaxies, the outflows appear much smaller because the galaxies are farther away. But the outflowing clouds we're seeing are only 25,000 light-years away in our galaxy. We have a front-row seat. We can study the details of these structures. We can look at how big the bubbles are and can measure how much of the sky they are covering."

Fox and his team used Hubble's Cosmic Origins Spectrograph (COS) in order to acquired this data. For their research, the focused in on a quasar that lies behind one of the huge, billowing gas clouds. As light from the quasar travels through the vast lobe, it carries with it information about the velocity, composition, and temperature of the expanding gas inside the bubble.

"It looks like the outflows are a hiccup," Fox said. "There may have been repeated ejections of material that have blown up, and we're catching the latest one. By studying the light from the other quasars in our program, we may be able to detect the fossils of previous outflows." Astronomers estimate that this latest explosion occurred some  2 million years ago.

Fox's results will be published in The Astrophysical Journal Letters and will be presented at the American Astronomical Society meeting in Seattle, Washington.

Further analysis will yield the amount of mass being ejected. The astronomers can then compare the outflow mass with the velocities at various locations in the bubbles to determine the amount of energy needed to drive it and, from this, they can possibly unveil the origin of the explosive event.