Have Astronomers Found a Red-giant With a Surprise In Its Core? 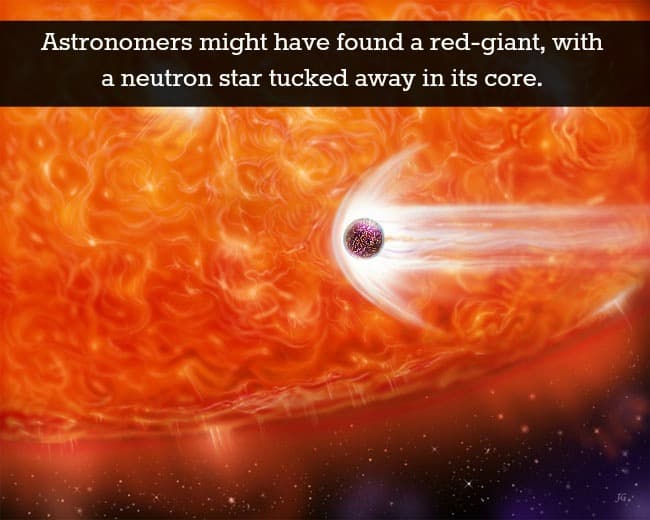 The Universe is full of surprises. Whatever you can think of, the universe probably has it tucked away somewhere. The surprise that has some astronomers excited this time is potential discovery of the very first Thorne-Zytkow object (TZO), which is a theoretical cosmic quirk that was first proposed in 1975 by Kip Thorne and Anna Zytkow. This uber-bizarre type of object - a red giant, with a neutron star at its core - is theoretically possible, but if verified, would upend the way that scientists understand how stars are powered.

The most convincing candidate so far, a red supergiant located in the Small Magellanic Cloud, was found as part of a study of 22 red supergiants conducted by Emily Levesque, an astronomer at the University of Colorado. These bizarre celestial peculiarities form when a neutron star is gobbled up by a red giant. This is strange for many reasons, as the two star types couldn't be any more different. Let's just look at a quick size comparison. Red giant stars reach sizes of 100 million to 1 billion kilometres in diameter (62 million to 621 million miles). This is 100 to 1,000 times the size of the sun today.

With such a massive expansion, one might come to wonder how this all happens. So, how does a red giant and a neutron star come to be?

Once a star ends its main sequence phase, the phase our sun is currently in, the star loses the ability to balance its gravitational collapse via nuclear fusion, and the star begins to contract - gravity takes over. The star will then compress and get increasingly tighter, resulting in a temperature change, which subsequently allows helium to fuse into carbon. The energy produced from this process causes the star to expand, resulting in the dramatic increase in size. The Sun itself is not exempt from this fate, it too will become a red giant, but it is too low in mass to become a neutron star (a fate reserved for stars that are much more massive than the sun). Over billions of years, the Sun will cool, becoming a white dwarf, and eventually a black dwarf (the time table for which is unknown).

Neutron stars come into being later on in the life cycle of a star. They are one of several possible paths a star can find itself following. Whether or not a star becomes a neutron star later in its life depends on its mass. A star with a mass that is four to eight times bigger than that of the Sun will explode in a supernova, subsequently ejecting its outer-envelope of material  into space. Afterward, the centre collapses under gravity, so much so that protons and electrons come together to form neutrons, thus forming the second part of the potential stellar hybrid that astronomers may have found.

The red giant may have the upper hand with regard to size, but when we bring density into the equation, the neutron star wins hands down. At roughly the size of a city, neutron stars have a density so high that a cubic metre of a neutron star would weigh just less than 400 billion tonnes. This unimaginable density could, in theory, allow the neutron star to sink into the red giant. One can think of this like a weight sinking into a liquid.

Theorists have proposed that there are several means by which a TZO could form. The most likely scenario is that the two stars begin as a binary star system; with the neutron star falling into its stellar companion. Neutron stars are a lot more dense than red giants, and it is this that allows them to bury themselves into the red giant's core. This is a rare process, and a long one at that. It is thought to take a thousand years for this to occur.

If what was reported at the most recent American Astronomical Society meeting is a Thorne-Zytkow object, the star will have another star in its core, and its chemical signature will be different than that of regular stars. Levesque's curious discovery is yet to be confirmed as a TZO, but the research team working on it has said that the star contains an abundance of molybdenum, lithium and rubidium, which are plentiful in the theoretical object.

Some astrophysicists speculate that if the theory is correct, there should be some to find in our own galaxy, the Milky Way. It has to be said, however, that no one has found any evidence that they exist in the Universe. In addition to this, there is more work to be done before the object is confirmed as a TZO, as it appears that the elements found in our candidate aren't as abundant as what's asked of the theory.