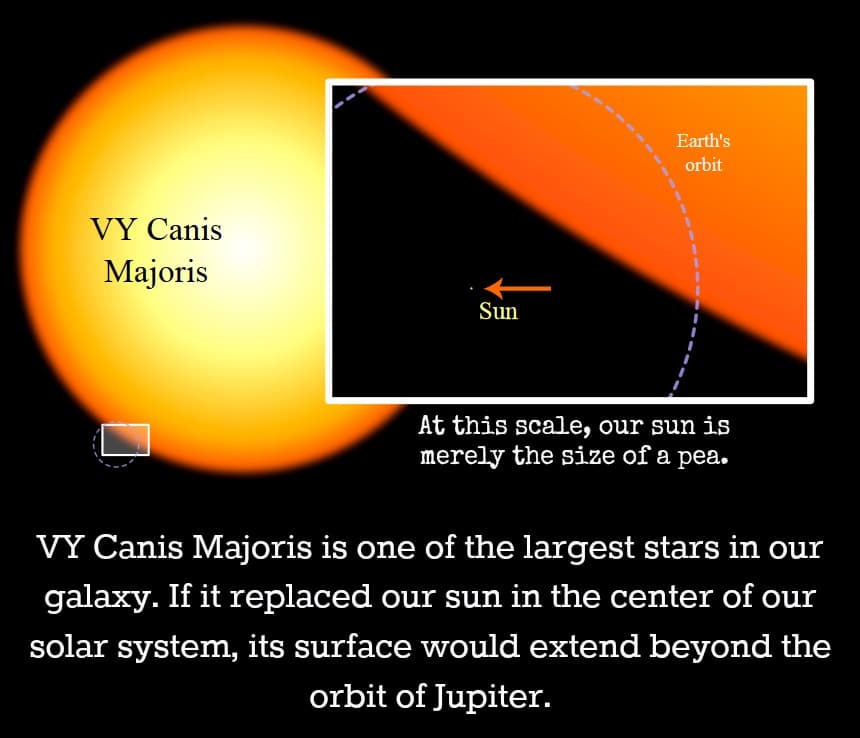 There are many different objects that have always grasped my imagination; be it Saturn’s rings, the mystical shapes of nebulae, the plethora of strange exoplanets, and of course, Luna. But there are some discoveries that boggle the mind, and for me, VY Canis Majoris tops the list.

Situated in the constellation Canis Major about 3,900 light years from Earth, this star is *one of the largest main-sequence star we know of in our galaxy (although another heavyweight is in the process of forming). The stellar titan was first observed over 200 years ago, and for many years afterwards, it was suspected to be a part of a binary star system. Because the star is so huge,  it is unstable and consequently, it is losing billions of tons of material every day. This material has collected to form a vast system of complex arcs and filaments; making it difficult for astronomers to view the star effectively. After extensive studies undertaken by the Hubble Space Telescope, it was confirmed in 1998 that there is no companion star, VY CMa is simply so massive that if it was to replace our Sun at the center of our solar system, its surface would stretch out beyond the orbit of Jupiter.

The radius has been estimated to come in at about 8.2AU (possibly even up to 10.2AU!), but the term, ‘surface,’ has no real definition here. You see, in the outer layers of the star, its density is so low, that it may be more comparable to a vacuum than a star. Its gargantuan size and properties have even sparked debate as to whether or not we can consider it a definite star, or if its more akin to a spherical nebula burning at 3000k! It is generally agreed that it is a star - and it isn’t alone. VY CMa belongs to a very exclusive group of stars, dubbed hypergiants. Hypergiants are so massive that they devour themselves at exponential rates - in other words, the amount of energy our Sun emits in year is equal to what a hypergiant would release in just 6 seconds. (Check out this video for another graphic comparison)

This enormous level of activity comes at a cost though, as stars belonging to this class typically live a very short and turbulent life. Their lives are only measurable in millions of years; for comparison our Sun is a 2nd generation main sequence star, and will live for about 10 billion years - so currently, its about halfway through its life cycle. As well as burning fuel faster than their smaller counterparts, their lives are further shorted by violent explosions and stellar outbursts. As a result, it is believed that VY CMa has already shed half of its original mass, so we can only speculate on how large the star was during its inception. Suffice to say, it could put our sun to shame.

Scientists suspect that VY CMa has approximately 100,000 years left before it goes nova, and (as you might expect) this star will not die in a quiet ‘poof’, but in a devastating explosion known as a hypernova. This is a rare form of supernova, which can emit energy equivalent to that of 100 regular ones. The core collapse of the star happens so quickly, that the gamma rays produced can decompose the nuclei of heavy elements such as iron inside the star. As neutrinos escape, the process is accelerated; causing protons and electrons to squeeze together, producing more neutrons and neutrinos - because the core now consists of almost no electrons, the neutrons can pack together closer and closer until they can go no tighter.

In a regular supernova, this extremely dense ball could become a neutron star or a pulsar. But the unusually high mass of VY CMa would probably result in the formation of a rogue black hole, capable of spitting out intense beams of gamma radiation. These beams could effectively wipe out any cellular life in nearby solar systems. Luckily for us, we aren’t at risk from these rare and deadly objects – in fact; of the hundreds of billions of stars present in the Milky Way, there aren’t many more than 10 hyper giants recorded thus far.

As for VY Canis Majoris, we can only wait and see what will happen, but it is thought that the spectacle would shine so brightly that we would be able to see it during daytime here on Earth. It is a perfect example of how the same laws of physics we live by can create almost unbelievable objects of wonder.

*Note:* many stars rival this one in size, but to date, this star remains the largest star in radius.

To see several other celestial objects that rival the wonder of this star, see our article: Four of the Largest Objects in the Observable Universe.