It's a crazy idea — and it might just work. 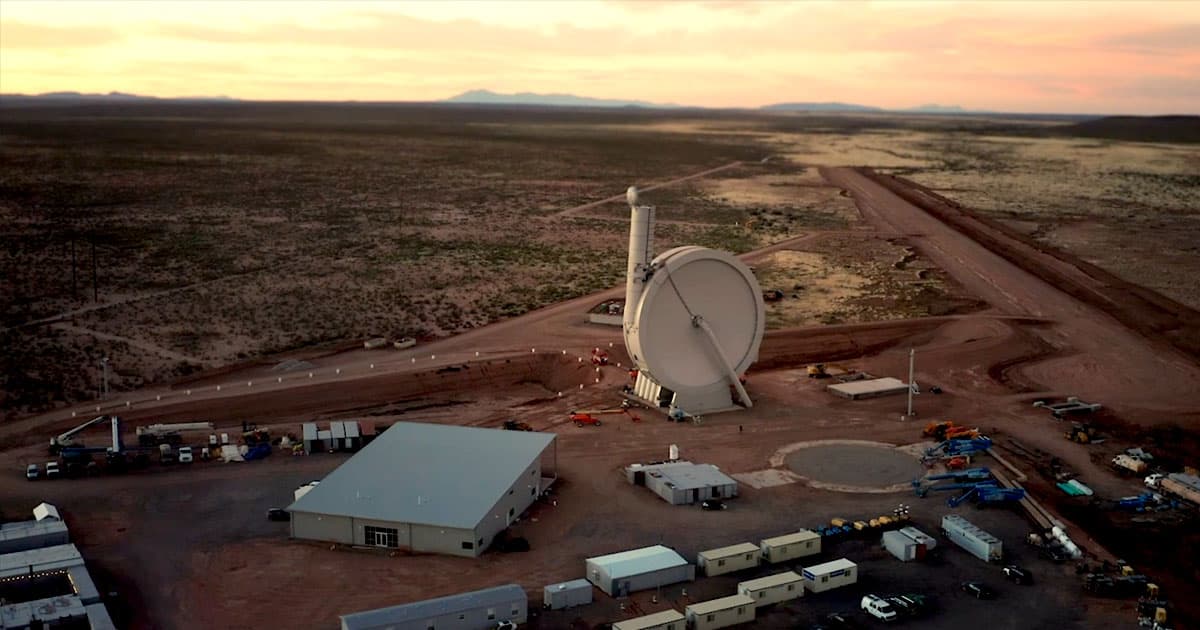 Space startup SpinLaunch has a wild idea: instead of launching rockets vertically from the ground, why don't we spin them inside a massive centrifuge and use that built up energy to slingshot them to high altitudes, where they can kick on relatively small rocket engines to cover the final distance into orbit?

After years of media coverage and countless renders of sleek rockets, the small company is finally ready to show off an early prototype of its suborbital accelerator — what essentially amounts to a massive centrifuge built near Spaceport America in New Mexico — and used it to fling a rocket high into the sky.

"It’s a radically different way to accelerate projectiles and launch vehicles to hypersonic speeds using a ground-based system," SpinLaunch CEO Jonathan Yaney told CNBC. "This is about building a company and a space launch system that is going to enter into the commercial markets with a very high cadence and launch at the lowest cost in the industry."

Despite only being built at one-third scale, the "suborbital accelerator" prototype stands at 165 feet tall. Inside a vacuum chamber, a massive rotating arm spins the projectile to crazy-fast speeds, thousands of miles per hour or several times the speed of sound.

In a tiny fraction of a second, the arm then lets go of the 10-foot projectile, allowing it to be catapulted into the air.

A video on the company's website shows the accelerator in action, including the team's reaction of the company's inaugural test flight.

"We can essentially validate our aerodynamic models for what our orbital launch vehicles are going to be like and it allows us to try out new technologies when it comes to release mechanisms," Yaney told CNBC.

Even dialed down to just 20 percent of full power, the accelerator was able to launch a payload to an altitude of "tens of thousands of feet," as the CEO told the broadcaster.

The advantage: rather than taking up all the space inside a rocket for fuel to get off the ground, SpinLaunch promises its vehicles could focus their mass on payloads rather than propellants.

Where SpinLaunch will go from here remains unclear. In 2019, the company signed a contract with the U.S. Department of Defense.

But with the right momentum, so to speak, the company stands a chance of catapulting itself into a red-hot satellite launch market — feet first.

More on SpinLaunch: This Startup Plans to Fling Rockets Into Space With a Centrifuge

Read This Next
Martian Oases
Scientist Proposes Growing a Forest Inside a Bubble on Mars
Putting Things In Perspective
Amazing Artemis Photo Shows Every Human, Alive or Dead, Plus the Moon
Fighting Words
Retired NASA Astronaut Scott Kelly Dishes on Ukraine, Russia, and Moon Mission
Psychological Warfare
Experts Excoriate NASA Report Claiming James Webb Wasn't Homophobic
Monkey Business
China Plans to Send Monkeys to Space Station to Have Sex With Each Other
More on Off World
Wrong Rocket
5:07 PM on the byte
Space Tourism Company's Website Accidentally Shows Photo of Rocket Exploding
SpaceX Spies
3:36 PM on the byte
SpaceX Unveils Military Satellite Called Starshield
I Don't Like This...
Yesterday on the byte
Fun Website Lets You Simulate an Asteroid Impact in Your Hometown
READ MORE STORIES ABOUT / Off World
Keep up.
Subscribe to our daily newsletter to keep in touch with the subjects shaping our future.
+Social+Newsletter
TopicsAbout UsContact Us
Copyright ©, Camden Media Inc All Rights Reserved. See our User Agreement, Privacy Policy and Data Use Policy. The material on this site may not be reproduced, distributed, transmitted, cached or otherwise used, except with prior written permission of Futurism. Articles may contain affiliate links which enable us to share in the revenue of any purchases made.
Fonts by Typekit and Monotype.