A new study could help us understand how the biggest black holes are formed. 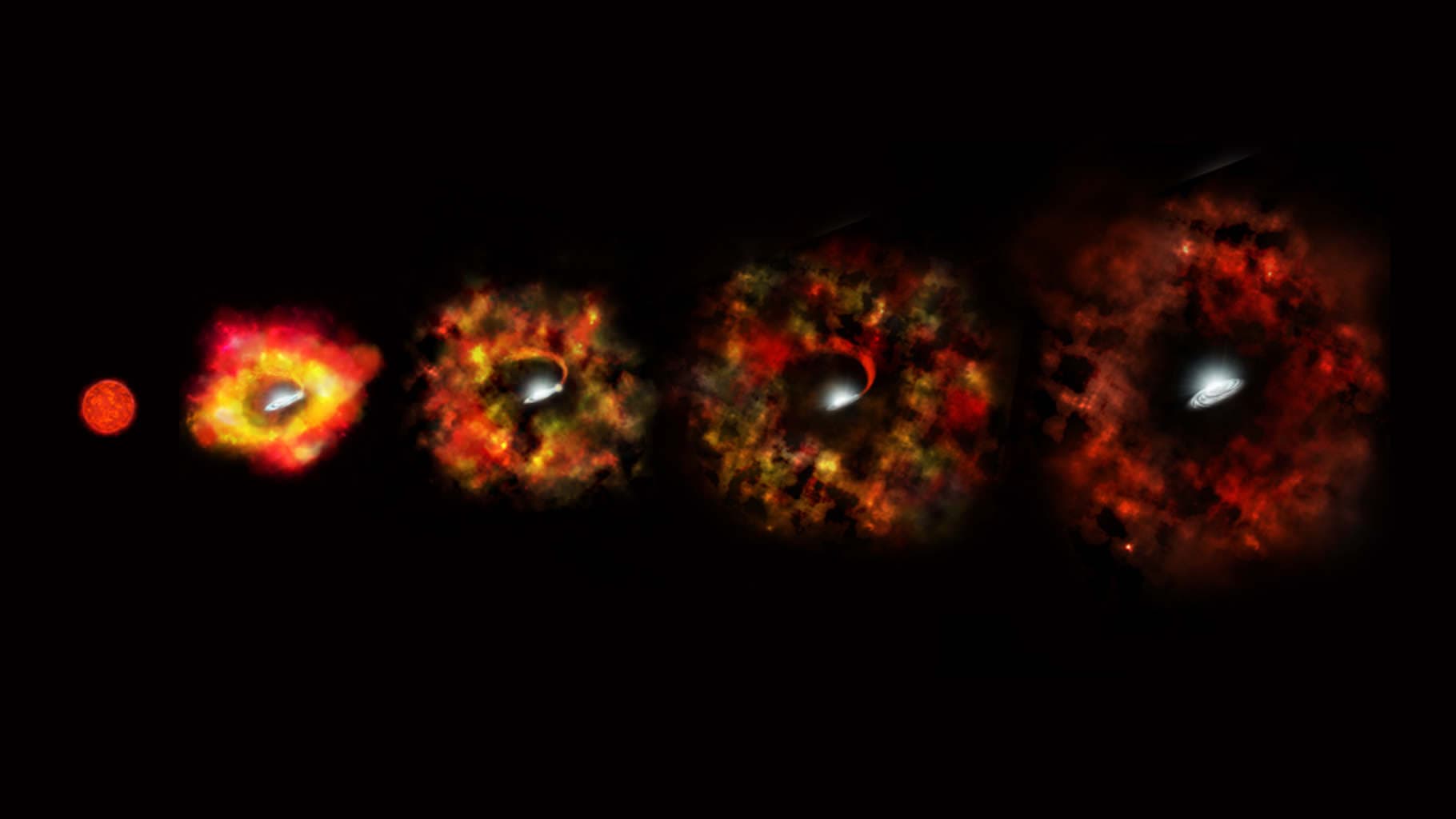 Collapsing stars are a rare thing to witness. And when astronomers are able to catch a star in the final phase of its evolution, it is a veritable feast for the senses. Ordinarily, this process consists of a star undergoing gravitational collapse after it has exhausted all of its fuel, and shedding its outer layers in a massive explosion (aka. a supernova). However, sometimes, stars can form black holes without the preceding massive explosion.

This process, what might be described as "going out not with a bang, but with a whimper," is what a team of astronomers witnessed when observing N6946-BH1 — a star located in the Fireworks Galaxy (NGC 6946). Originally, astronomers thought that this star would explode because of its significant mass. But instead, the star simply fizzled out, leaving behind a black hole.

The Fireworks Galaxy, a spiral galaxy located 22 million light-years from Earth, is so-named because supernova are known to be a frequent occurrence there. In fact, earlier this month, an amateur astronomer spotted what is now designated as SN 2017eaw. As such, three astronomers from Ohio Sate University (who are co-authors on the study) were expecting N6946-BH1 would go supernova when in 2009, it began to brighten.

However, by 2015, it appeared to have winked out. As such, the team went looking for the remnants of it with the help of colleagues from Ohio State University and the University of Oklahoma. Using the combined power of the Large Binocular Telescope (LBT) and NASA's Hubble and Spitzer space telescopes, they realized that the star had completely disappeared from sight.

The details of their research appeared in a study titled "The Search for Failed Supernovae with the Large Binocular Telescope: Confirmation of a Disappearing Star," which recently appeared in the Monthly Notices of the Royal Astronomical Society. Among the many galaxies they were watching for supernovas, they had their sights set on the Fireworks Galaxy to see what had become of N6946-BH1.

After it experienced a weak optical outburst in 2009, they had anticipated that this red supergiant would go supernova – which seemed logical given that it was 25 times as massive as our Sun. After winking out in 2015, they had expected to find that the star had merely dimmed, or that it had cast off a dusty shell of material that was obscuring its light from view.

Their efforts included an LBT survey for failed supernovae, which they combined with infrared spectra obtained by the Spitzer Space Telescope and optical data from Hubble. However, all the surveys turned up negative, which led them to only one possible conclusion: that N6946-BH1 must have failed to go supernova and instead went straight to forming a black hole.

As Scott Adams — a former Ohio State student who is now an astrophysicist at the Cahill Center for Astrophysics (and the lead author of the study) — explained in a NASA press release:

N6946-BH1 is the only likely failed supernova that we found in the first seven years of our survey. During this period, six normal supernovae have occurred within the galaxies we’ve been monitoring, suggesting that 10 to 30 percent of massive stars die as failed supernovae. This is just the fraction that would explain the very problem that motivated us to start the survey, that is, that there are fewer observed supernovae than should be occurring if all massive stars die that way.

A major implication of this study is the way it could shed new light on the formation of very massive black holes. For some time now, astronomers have believed that in order to form a black hole at the end of its life cycle, a star would have to be massive enough to cause a supernova. But as the team observed, it doesn’t make sense that a star would blow off its outer layers and still have enough mass left over to form a massive black hole.

As Christopher Kochanek — a professor of astronomy at The Ohio State University, the Ohio Eminent Scholar in Observational Cosmology and a co-author of the team’s study — explained:

The typical view is that a star can form a black hole only after it goes supernova. If a star can fall short of a supernova and still make a black hole, that would help to explain why we don’t see supernovae from the most massive stars.

This information is also important as far as the study of gravitational waves goes. In February of 2016, scientists at the Laser Interferometer Gravitational-wave Observatory (LIGO) announced the first detection of this strange phenomena, which were apparently generated by a massive black hole. If in fact massive black holes form from failed supernova, it would help astronomers to track down the sources more easily.

Be sure to check out this video of the observations made of this failed SN and black hole:

Read This Next
Strange Stars
Astronomers Puzzled by Extremely Peculiar Object in Deep Space
zombie star
Scientists Puzzled by Star That Exploded in Supernova But Somehow Survived
Star War
Scientists Are Trying to Figure Out How to Kill Stars with Black Holes
EHT Tu, Black Hole
Astronomers Release Stunning New Image of Black Hole
Betelgeuse Betelgeuse Betelgeuse
Astronomers: This Star Isn't As Giant As We Thought, Just Closer
More on Hard Science
Warped Tour
Feb 2 on futurism
Professor Believes Door to Warp Drive May Lie With Ethylene Glycol
Sky Bursts
Feb 2 on the byte
Astronomers Intrigued by 25 Mysterious Repeating Radio Signals From Deep Space
Tractor Beam
Jan 26 on the byte
Scientists Build Working Tractor Beam, Although It's Comically Tiny
READ MORE STORIES ABOUT / Hard Science
Keep up.
Subscribe to our daily newsletter to keep in touch with the subjects shaping our future.
+Social+Newsletter
TopicsAbout UsContact Us
Copyright ©, Camden Media Inc All Rights Reserved. See our User Agreement, Privacy Policy and Data Use Policy. The material on this site may not be reproduced, distributed, transmitted, cached or otherwise used, except with prior written permission of Futurism. Articles may contain affiliate links which enable us to share in the revenue of any purchases made.
Fonts by Typekit and Monotype.