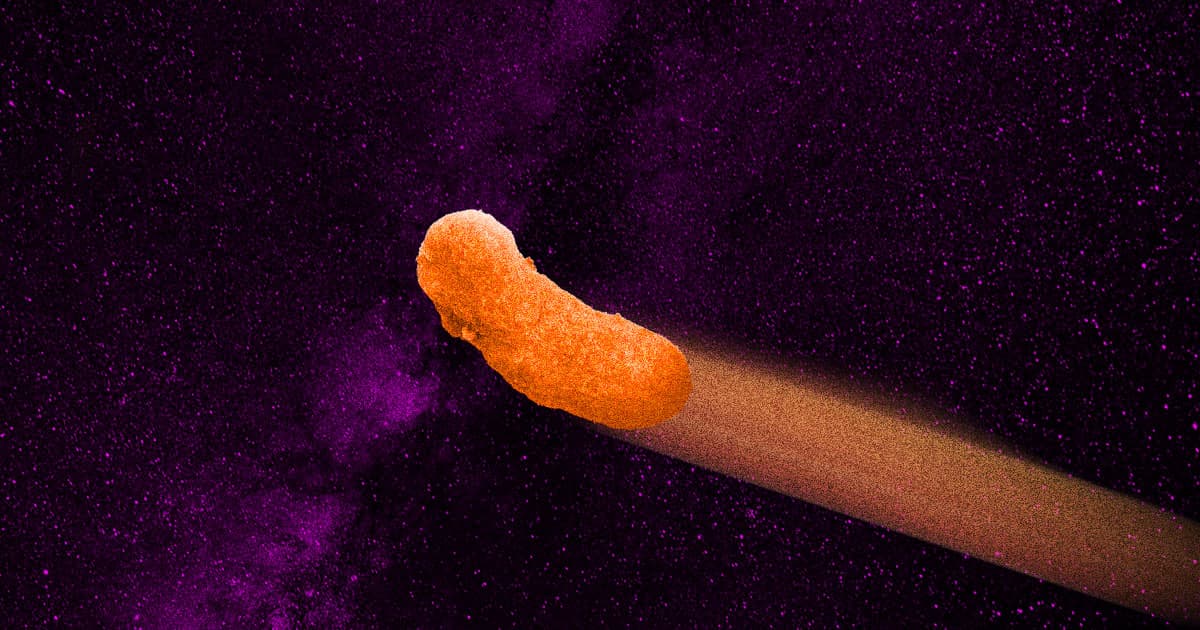 Who would win in a fight: the International Space Station (ISS) or a single Cheeto Puff orbiting the Earth?

It's an argument that raged online this morning after a Reddit user's seven-year-old daughter asked whether one Cheeto could destroy the ISS in a head-on collision. Thankfully, the overwhelming consensus — even among several self-identified aerospace engineers and one scientist who helped design the ISS — is that the Cheeto doesn't stand a chance and that the ISS crewmembers would be safe.

But there is room for debate, it seems, over how much destruction the cheesy projectile would cause along the way.

The question seems silly, but anything hurtling toward the space station at 9.3 miles per second poses a risk — even a greasy cheese snack. Space collisions are a real risk, and the ISS recently had to dodge out of the way of incoming space junk that ultimately passed within 1.4 kilometers of the station.

Neither NASA nor PepsiCo, the maker of Cheetos, responded to Futurism's inquiry by press time. But the Cheeto would likely be less dangerous than orbital debris, in part because when Frito creator Charles Doolin invented the Cheeto in 1948, he probably didn’t have hypervelocity impacts or space travel in mind.

Upon impact, according to the consensus view on Reddit, the brittle Cheeto would likely break down into a cloud of plasma and disperse. That makes a collision far less dangerous than one with a solid, compact object.

"Certainly, I would expect the spongy/porous/very low-density material of the Cheeto puff to have far less of an effect than a denser material of the same mass," Letter_13, a self-identified aerospace engineer who weighed in on the debate told Futurism.

Letter_13 declined to share their real identity and professional affiliation due to security concerns at their job.

"Things get tricky when you bump things together so hard that they turn into rapidly expanding clouds of superheated gases," Letter_13 told Futurism.

Being in space would only make the Cheeto more fragile, Letter_13 told Futurism.

"[The Cheeto] would absolutely become more brittle in space — many of the oils contained in the Cheeto puff would begin to boil off and evaporate in a vacuum, drying the unfortunate snack out even further and making it more brittle," they explained. "This would be accelerated dramatically if the Cheeto were orbiting the earth in direct sunlight (which could potentially cook/bake the thing into just a hunk of carbon)."

"Depending on where it hit, it may leave a dent, though more than likely it would just leave a bit of an orange stain (if that)," Letter_13 wrote in the original thread.

Really, it comes down to where the Cheeto hits the ISS, according to a Redditor who goes by danielravennest and claims to be part of the team that designed the ISS.

Danielravennest didn't respond to Futurism's request for comment but did argue in the thread that the Cheeto probably wouldn't even dent an ISS module. However, it would be able to take out a solar cell or two if it crashed into a panel.

"At the typical impact velocities in orbit, objects are moving faster than the speed of sound and carry more kinetic energy than it takes to turn them into plasma," danielravennest wrote. "Critical areas of the ISS are protected by 'Meteor/Debris Shields' (Whipple Shields). These are sheet metal spaced away from the module hull, air tanks, etc. So on impact, the object and the part of the shield they hit are both turned to plasma, and sprays out in a cone. So the module hull isn't damaged unless it were a large object."

"The solar arrays are the largest part of the Station by area, but they are a thin plastic backing with thin solar cells attached," danielravennest added. "They have been hit several times. All that happens is you punch a hole and lose one or two cells."

Read This Next
Monkey Business
China Plans to Send Monkeys to Space Station to Have Sex With Each Other
Overview Effect
William Shatner Says His Space Trip Left Him With a Feeling of Terrible Grief
Don't let the door hit you
Elon Musk Lobs Casual Space Station Burn at Moscow
Buh Bye
Russia Says It's Definitely Quitting the ISS But Doesn't Say When Exactly
Don't Let the Door Hit You
Russian Space Chief Leaving Post, May Be Headed to War Zone
More on Off World
Lonely Planet
4:20 PM on futurism
Scientists Find Nearby Planet the Same Size of Earth, Plan to Search It for Life
Take Cover
Yesterday on the byte
Space Startup Blows Up Another Giant Inflatable Space Station Module
Rock Blast
Yesterday on the byte
Scientists Say There's an Upside to Those Rocks That Keep Bludgeoning the James Webb
READ MORE STORIES ABOUT / Off World
Keep up.
Subscribe to our daily newsletter to keep in touch with the subjects shaping our future.
+Social+Newsletter
TopicsAbout UsContact Us
Copyright ©, Camden Media Inc All Rights Reserved. See our User Agreement, Privacy Policy and Data Use Policy. The material on this site may not be reproduced, distributed, transmitted, cached or otherwise used, except with prior written permission of Futurism. Articles may contain affiliate links which enable us to share in the revenue of any purchases made.
Fonts by Typekit and Monotype.