SpaceX Smashed the Record for Commercial Space Launches This Year

It's been a banner year for Elon Musk's SpaceX. 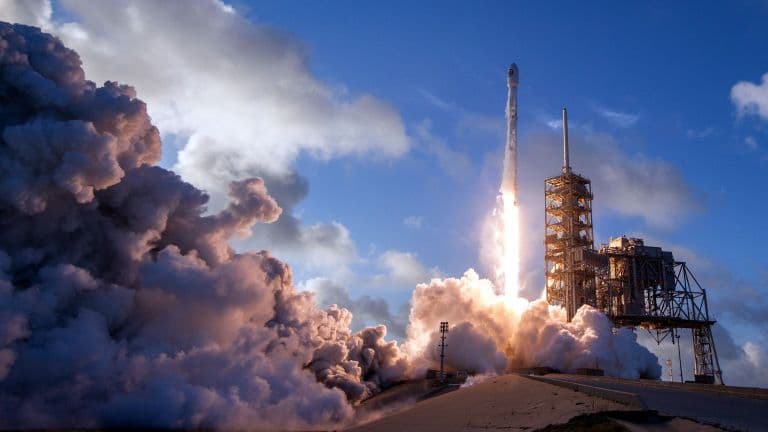 As humankind ventures farther up the Earth's gravity well, it's been a banner year for Elon Musk's commercial spaceflight venture SpaceX.

Case in point: Business Insider reports that SpaceX has shattered the record for commercial rocket launches in a year, at 20. That beats the prior record of 18 launches in a year — which was also set by SpaceX, in 2017. Before that, the figure stood at 16, set by United Launch Alliance in 2009.

SpaceX has one more launch scheduled for 2018 — a satellite called GPS Block IIIA, which will improve location tracking services for the U.S. Air Force — bringing the company's total tally of launches to 21.

It's worth noting, though, that the 21 launches falls short of Musk's most optimistic prediction for the company in 2018: that it would launch more rockets than any country on Earth. That honor, Business Insider found, went to China, which has launched about 35 rockets this year.

Musk has had a tough year in the press, with drama as his electric car company, Tesla, struggled to bring its Model 3 compact to market. But the launch record comes as a bright cap to a year — and just weeks after Tesla reportedly managed to churn out 1,000 Model 3 vehicles per day.

"Life cannot just be about solving one sad problem after another," Musk tweeted earlier this year after launching a Tesla Roadster into space. "There need to be things that inspire you, that make you glad to wake up in the morning and be part of humanity. That is why we did it. We did for you."

An earlier version of this story referred to traveling "into" Earth's gravity well, when space travel actually entails going up the gravity well. It has been updated.

More on SpaceX: Looks Like SpaceX Is One Step Closer to Launching Another Falcon Heavy

Read This Next
And He Scores
We Are Completely Puzzled by This Video of a Chinese Astronaut Playing Ping-Pong in Space
Moon Wrestling
The Head of NASA Is Scared Chinese Astronauts Will Seize Portions of the Moon
Shot Well
Head of NASA Relieved to Hear Elon Musk Isn't REALLY Running SpaceX
Monkey Business
China Plans to Send Monkeys to Space Station to Have Sex With Each Other
Makeover Scene
Space Tourist Says He's Thinking About Flying SpaceX Craft Up to Fix Hubble
More on Off World
Hall Effect
Yesterday on futurism
Test Suggests Ion Thrusters Could Power Crewed Interplanetary Missions
CHON: Legacy
Yesterday on the byte
James Webb Discovers Coldest Ice in Known Universe, Harboring Molecules Essential For Life
Is There?
Yesterday on the byte
NASA Setting Up Facility For Mars Rock Samples That Might Contain Alien Life
READ MORE STORIES ABOUT / Off World
Keep up.
Subscribe to our daily newsletter to keep in touch with the subjects shaping our future.
+Social+Newsletter
TopicsAbout UsContact Us
Copyright ©, Camden Media Inc All Rights Reserved. See our User Agreement, Privacy Policy and Data Use Policy. The material on this site may not be reproduced, distributed, transmitted, cached or otherwise used, except with prior written permission of Futurism. Articles may contain affiliate links which enable us to share in the revenue of any purchases made.
Fonts by Typekit and Monotype.