It’s big, shiny, and will get you into space. 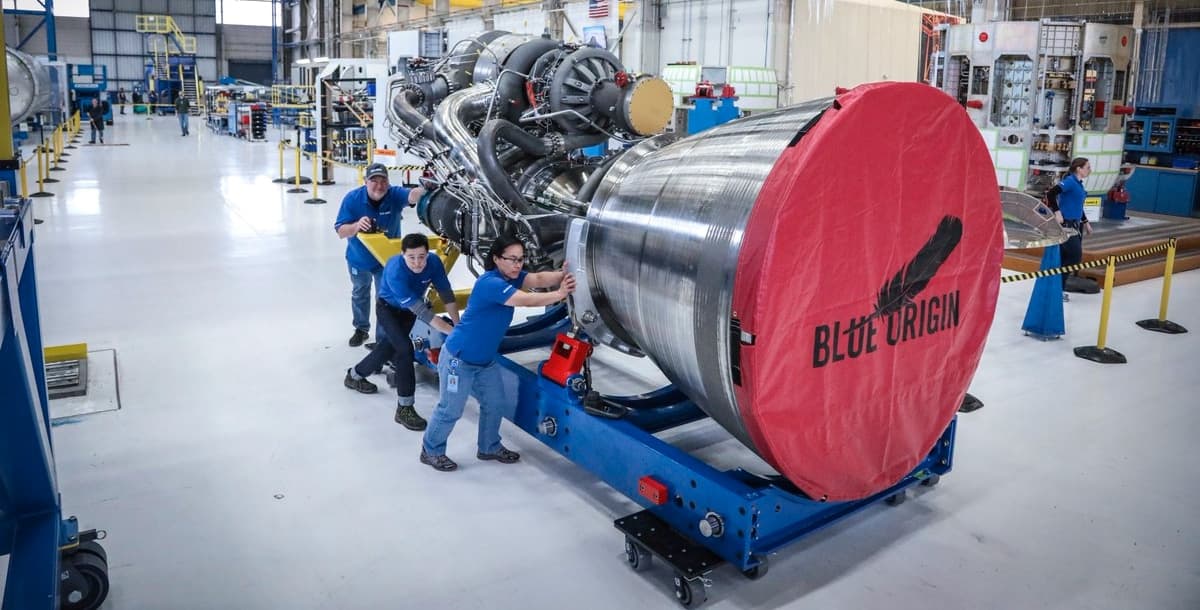 An Engine 6 Years in the Making

SpaceX's well-known competitor in the private space industry, Blue Origin, is making strides in its effort to have private citizens breach the final frontier. While SpaceX prepares for its 2018 lunar mission, Blue Origin founder Jeff Bezos is confident his company will be able to send two astronauts to space by the end of 2017, with commercial flights following in 2018. He certainly does have a few good reasons for this confidence. In fact, soon, he'll have six.

After six long years of development, Blue Origin has finally unveiled one of its BE-4 rocket engines. The engine is expected to be used with five others just like it in structure and function to power the upcoming New Glenn rocket. Blue Origin has plans for two versions of these rockets, a 2-stage version and a 3-stage version. The New Glenn is expected to be 7 meters (23 feet) in diameter and range in length from 82 meters (270 feet) to 95 meters (313 feet).

So where do the BE-4 engines come in? The first and second stages of the rocket will have boosters made up of the BE-4 engines, while the third stage will incorporate an older BE-3 engine.

The New Glenn is similar to its predecessor, the New Shepard, in that it will be a reusable space vehicle with a first stage that can return to the launch site standing upright after each flight. This style of rocket will save companies a huge sum of money on flights. A distinction between the New Glenn and the New Shepard is that the former will be equipped with enough power to carry heavy cargo payloads and astronauts into orbit around the Earth.

While the New Glenn has yet to be made, Blue Origin expects that it will be used to transport goods and people in space by the end of the decade. In the meantime, the BE-4 engine will undergo certification at Blue Origin's West Texas-based site.

Between the initiatives of private companies like Blue Origin and SpaceX and the missions of governments like the U.S. and China, humanity is launching into a new era of space flight. The BE-4 engines are one more step forward on that epic journey.

Read This Next
Overview Effect
William Shatner Says His Space Trip Left Him With a Feeling of Terrible Grief
And Beyond
How NASA Got Price Gouged on the SLS, According to Its Former Second-in-Command
Billionaire Bailout
Bernie Sanders Working to Block Jeff Bezos From NASA Moon Contract
Heating Up
One Space Trip Emits a Lifetime's Worth of Carbon Footprint
Yikes
Newly Released Court Documents Obliterate Blue Origin's Lawsuit Against NASA
More on Off World
Wrong Rocket
5:07 PM on the byte
Space Tourism Company's Website Accidentally Shows Photo of Rocket Exploding
SpaceX Spies
3:36 PM on the byte
SpaceX Unveils Military Satellite Called Starshield
I Don't Like This...
Yesterday on the byte
Fun Website Lets You Simulate an Asteroid Impact in Your Hometown
READ MORE STORIES ABOUT / Off World
Keep up.
Subscribe to our daily newsletter to keep in touch with the subjects shaping our future.
+Social+Newsletter
TopicsAbout UsContact Us
Copyright ©, Camden Media Inc All Rights Reserved. See our User Agreement, Privacy Policy and Data Use Policy. The material on this site may not be reproduced, distributed, transmitted, cached or otherwise used, except with prior written permission of Futurism. Articles may contain affiliate links which enable us to share in the revenue of any purchases made.
Fonts by Typekit and Monotype.