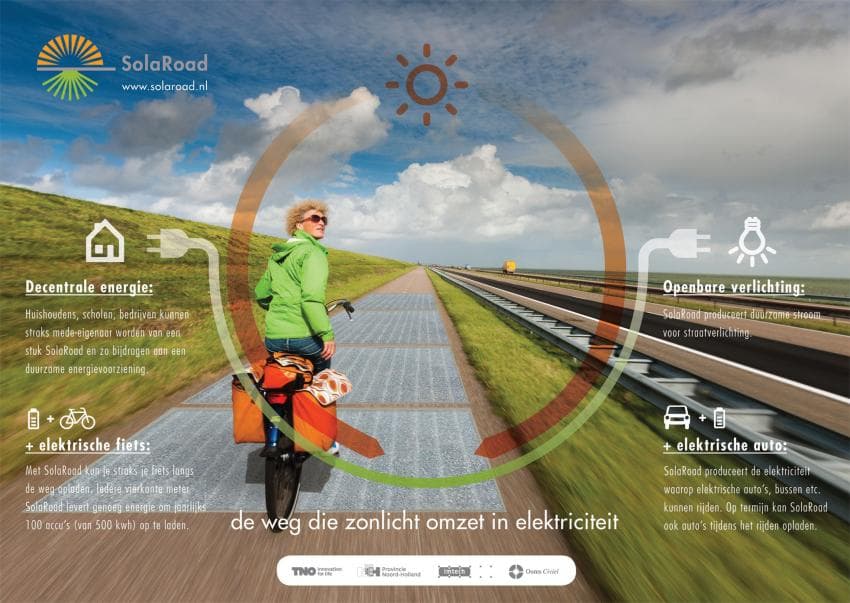 Every year we consume more and more energy, and our dependence on technology is increasing day by day. This poses a bit of a problem, as our current methods of energy production are not sustainable (not even remotely so). This is where SolaRoad comes in. This project is exactly what it sounds like—solar panels that pull double duty as road surface and electricity generator.

It may seem like make-believe; however, A bike path that services 2,000 cyclists per day, which is located in Amsterdam, is now dotted with solar panels. And it’s set to open next week.

Ultimately, this feat  accomplished by using rows of crystalline silicon solar cells, which were embedded into the concrete of the path and covered over by a thick, tempered glass. Of course many will probably point out that the road will be ineffective when it gets dirty; however,  the road was built slightly titled in an effort to keep dust and dirt from accumulating and obscuring the solar cells.

Currently, the bike path is rather short, just 230 feet (70 meters); however, when the bike path is extended to its full 328 feet (100 meters) in 2016 it will be able to generate enough energy to power 3 houses (which is no small feat for such a short road).

The press release notes, "Even though the single-lane path produces less than 30 percent less energy than rooftop solar panels, researchers hope that the SolaRoad will utilize up to 20 percent of the 140,000km roadway for renewable energy generation, vastly increasing the surface area that could be achieved with rooftop solar panels. The short stretch of road is expected to generate enough electricity to power 2 or 3 average homes annually. Future projects aim at developing road surfaces to combine with a Road Energy Systems product, also developed by Ooms Civiel, that is designed to extract heat from asphalt surfaces."

Of course, the project has been criticized by several individuals, as maintaining a regular road is difficult enough. Yet, that is precisely why using a bike path is a first great step. Given current technology, most assert that it's not possible to develop functioning solar roadways for cars; however, this is a notable step in making our living patterns sustainable, as it could lead to new innovative, beneficial technology