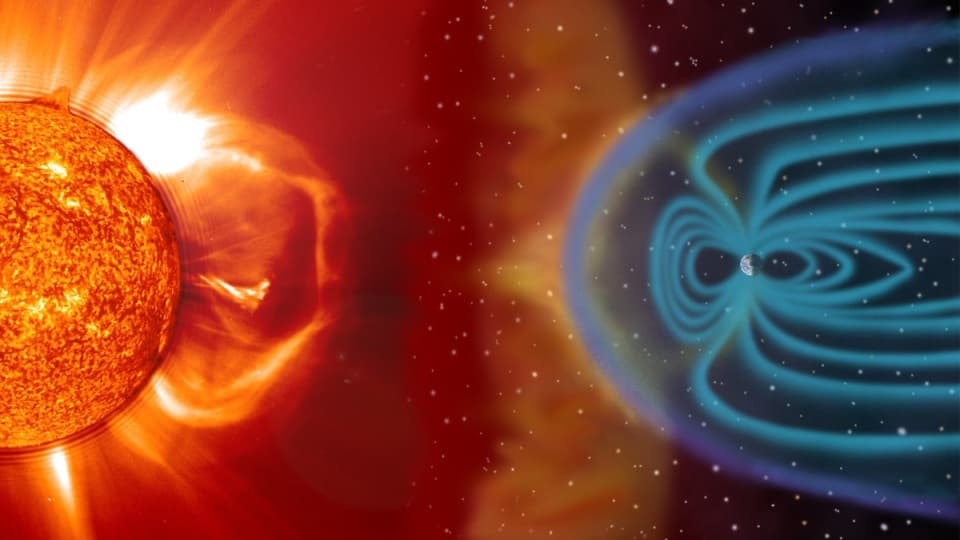 NASA’s Voyager 1 spacecraft has experienced another “tsunami wave” sent from our Sun. Even as the probe makes its way through interstellar space, it is still feeling the subtle, diluted reach of our home star's violent outbursts, phenomena that include  cosmic shock-waves and CMEs (coronal mass ejections). The vast distance separating the Sun from Voyager doesn't keep us from seizing the opportunity to see how solar activity influences a distant, poorly-understood,  region.

Voyager 1 has pretty much stayed in the news over the last couple of years, with attentions focused on the critical part of its journey. Reports began to circulate that Voyager was finally venturing out into the space between the stars. As of September 2013, it was confirmed the first Voyager probe had left our Sun’s bubble of influence called the heliosphere, officially marking its entrance into  interstellar space.

Far beyond the orbit of Neptune, the NASA-operated craft is currently travelling through a patch of charged particles (called plasma). When our Sun sends out explosive CMEs, Voyager has the ability to detect this plasma, helping scientists confirm that Voyager has indeed taken its first steps towards leaving the solar system. The newest wave picked up by the vessel’s instruments is the third of its kind, boosting confidence in Voyager’s location.

At the moment, Voyager is bathed in charged particles emitted from near-by stars. When our own Sun’s CME shockwaves meet these particles, they get pushed around like buoys in a tsunami. Voyager’s cosmic ray and plasma wave instruments then detect these interactions, sending the data back down to Earth to pick through. "Normally, interstellar space is like a quiet lake, but when our Sun has a burst, it sends a shock wave outward that reaches Voyager about a year later. The wave causes the plasma surrounding the spacecraft to sing," said Ed Stone of the California Institute of Technology in a NASA press release." The tsunami wave rings the plasma like a bell. While the plasma wave instrument lets us measure the frequency of this ringing, the cosmic ray instrument reveals what struck the bell -- the shock wave from the Sun."

As you're reading this, the Sun’s heliosphere is pushing against the denser matter from other stars. The second wave that was detected back in 2013 told scientists that the plasma in which Voyager is immersed in is 40 times denser than the previous reading — a density found beyond the projected heliosphere. A newer third wave, detected in March, is further evidence Voyager has made it to the interstellar medium.

Being the farthest man-made object from Earth, Voyager 1 will almost certainly be the first object created by humans to leave the solar system and drift elsewhere into the vast Milky Way Galaxy. That is, assuming our calculations are off and Voyager has a bit further to go before it breaks free of the Sun's predominant gravitational hold. It certainly wouldn't be the first time.

Informally, at one point, the edge of our solar system was  defined as the region beyond the last planet, Neptune. However, the scientific consensus on what qualifies as the edge now says that the Oort Cloud — a spherical cluster of icy comets and asteroids known to be the most distant objects in our solar system — marks the boundary. It will take 300 years for Voyager 1 to reach the Oort Cloud and another 30,000 years for the small craft to pass through it.

Voyager 2 was launched just 16 days after its sister craft in 1977, both probes have completed a detailed inspection of the local planets. However, both of the unmanned vessels will lose power in a few decades and shall be left to drift through the cosmos as ambassadors of Earth.

Even after both Voyager probes are offline, their legacy will remain. Learn more here.