Solar Eclipse Followed by a Beautiful Flare (plus video) 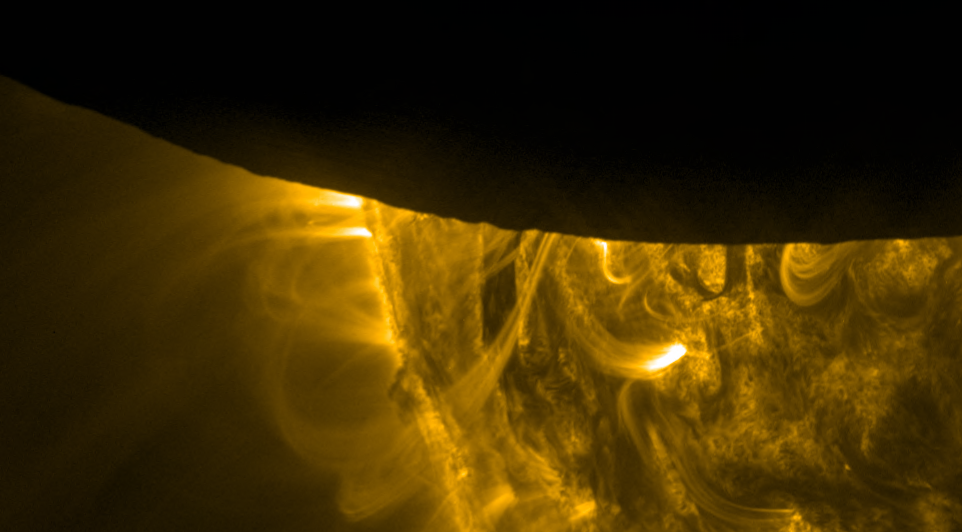 The Moon passed in front of the Solar Dynamics Observatory (SDO) yesterday to be immediately followed by a beautiful filament eruption and a massive flare. Before you go any further, be sure to check out the video of the event embedded below (mobile users click here). The flare clocked in at M6.6, which is a classification based on the amount of X-Rays detected by the GOES satellite. M-class events are the second largest next to X, and this one was enough to trigger a "Major Flare Watch". This means that an army of ground- and space-based telescopes are now turning their eyes toward the flaring region in hopes of another big one. And this region definitely looks capable of producing more big flares.

The best indicator of future flare activity is the magnetic complexity of the region. The image below is a "magnetogram" taken by the Helioseismic and Magnetic Imager (HMI) on SDO. It shows the strength of the Sun's surface magnetic field - white is positive polarity and black is negative. Notice how there are large chunks of white and black all mixed together. Flares are driven by changes in the Sun's magnetic connectivity, so a jumbled up configuration like this one is very suggestive of flares to come. Yesterday's event was probably too far left-of-center to have any meaningful impact on Earth, but we might be in for some auroral activity if the region erupts again in the coming days.

We were lucky to see this event at all, considering that the Moon got out of the way just in time. Take a look at the GIF animation below and notice how the Moon arcs through the field. This curious effect is due to the ever-changing position of the satellite as it whirls around our planet. Since SDO's viewing angle is rapidly changing as it orbits, the apparent path of the Moon curves due to the parallax effect. Phil Plait has a nice explanation of this effect over at Bad Astronomy.

Even without the Moon, this event was pretty interesting. Did you notice that there were actually three eruptions? Note the two small bursts just before the big one in the GIF below. The dark structure that lifts off is called a "filament", and it's possible that the smaller eruptions triggered it to erupt by throwing the surrounding magnetic field out of equilibrium. It's very difficult to say, though, because it also looks like the filament may have begun its eruption at the same time as the smaller events. Determining causal relationships for these things is nearly impossible with a region this complex, and any strong claim would require a modeling effort to be convincing.

Once the filament casts off into space, new magnetic field loops close in over the area where it was before. These new loops are what caused the increase in X-Ray intensity, which is how we measure the strength of a flare. Remember that there's a good chance that this region will flare again, so stay tuned! And for more of our beautiful star, check out the article for our previous solar movie.