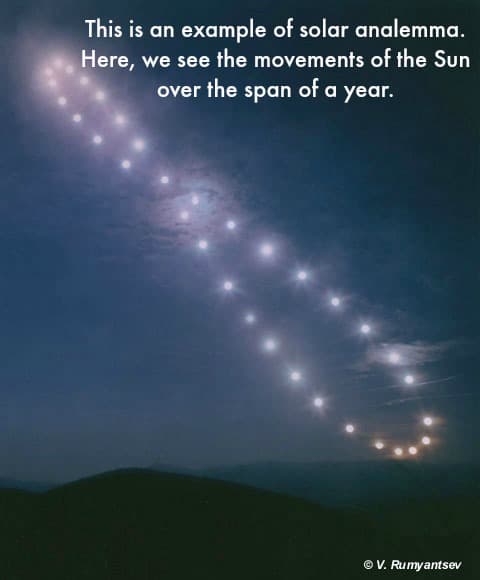 Have you ever heard of an analemma? Most of the time when talking about this phenomena, we are talking about solar analemma, but any celestial object can create an analemma (assuming the proper conditions exist, that is). Because of Earth’s tilted axis and its elliptical orbit, the sun changes position in the sky over the course of a year, this causes the sun to follow a curved path through the sky. When the position of the object is recorded at the same time each day over the course of a year, the end result is an analemma.

This particular picture was taken by Vasiliy Rumyantsev in Crimea. This is the most complicated picture captured by this photographer. In order to capture an analemma, each picture must be taken from the same location at the same time for a year – this is no easy task. Between August 30, 1998 and August 19, 1999, Rumyantsev set out to capture the solar analemma. He obviously succeeded. The picture was taken every ten days, however, due to bad weather, shooting was prolonged one or two days in some cases (he only missed two exposures because of the weather). The end result is this magnificent 36 image composite of the solar analemma.

WHY DOES IT LOOK THE WAY IT DOES?

Earth’s solar analemma has an apparent shape of a figure eight, resembling the geometric figure known as a “Lemniscates of Bernoulli” (now, that is a cool sounding name). So, how does this shape change as you move around the globe? First, in the northern hemisphere, the smaller loop always appears north of the larger loop. However, at the equator it would be horizontal, and in the southern hemisphere the larger loop is seen north of the smaller loop. Second, you’d only be able to observe half of the analemma at the poles. Also, if you view the analemma at noon it will be upright, whereas viewing it in the early morning/evening will result in it tilting to one side or another.