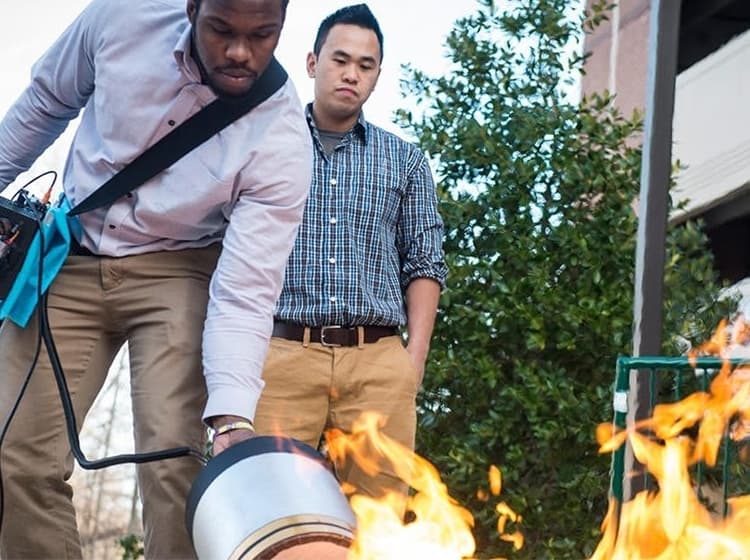 In case you missed it, last week, students at George Mason University developed a fire extinguisher which uses low-frequency sound waves to blast flames into submission. Viet Tran and Seth Robertson, seniors in the Electrical Engineering program, have developed a portable extinguisher that puts out flames without any messy liquids or powders and no environmental impact whatsoever.

The 20 pound prototype extinguisher looks like a 1950’s science fiction ray gun. A sound generator in a wearable pack connects by wire to a barrel which contains a bass speaker. The barrel amplifies and focuses the sound waves from the speaker.

Odd as it looks, however, the device doesn’t work much differently than what happens when you blow out candles on a birthday cake.

Pulsing sound waves produce successive blasts of air across the base of the flames. These pulses, at the boundary layer where combustible gases actually ignite into flames, disrupts the combustion process and blows the flames out. Flames are a cold plasma, which provides a substance susceptible to disruption by physical and electromagnetic influences. Sounds, then, which are transmitted by subtle (or not-so-subtle) pressure waves in air, provide a mechanism for affecting them.

Very low frequency bass waves, in the 30 to 60 hertz range, are the key. The students started off with very high frequencies, but they didn’t find that they had much effect on the flames. They then tried using music as the source at first — they thought hip hop might produce a good bass line — but found that it was too inconsistent to be effective.

The idea itself wasn’t new; MythBusters tested an electronically amplified human voice and found that it could extinguish fires when amplified to 149 decibels. That test itself was based on a story from the early 1900s of a man who was said to have a voice which could accomplish similar results.

Stunts aside, there have also been more serious adaptations of the concept. DARPA developed a sound-based extinguisher four years ago.

But the device was bulky and fixed, which is only useful if you know where the fire is going to be — not a common characteristic of unwanted fires. The students have applied for a provisional patent for their device with the help of their university’s Office of Technology Transfer.