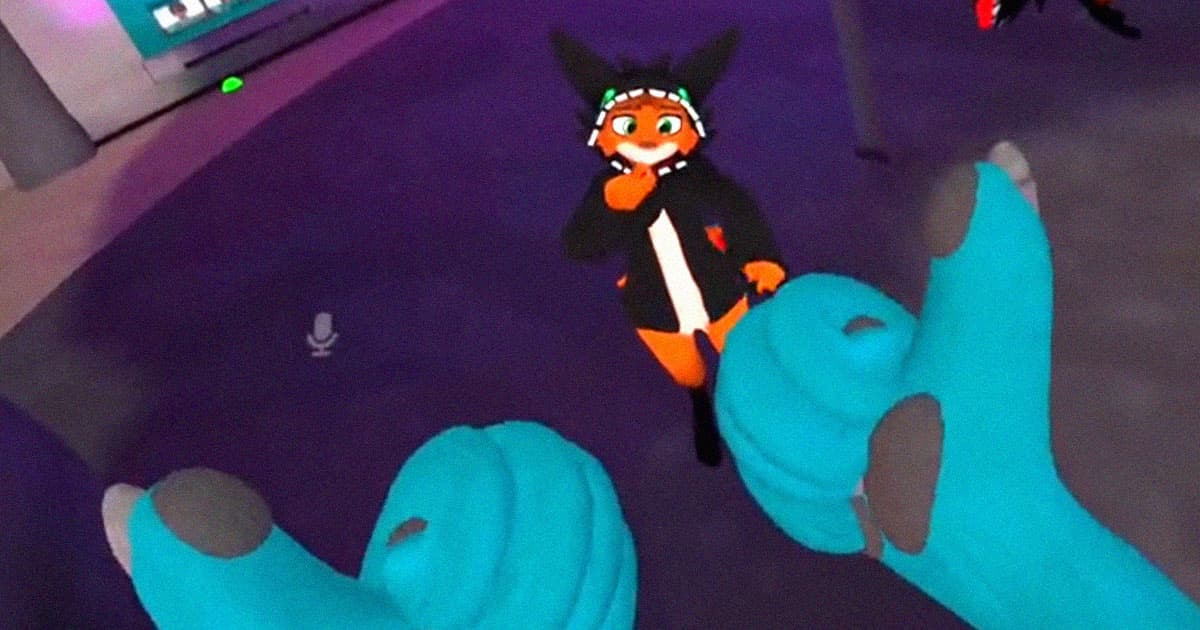 Virtual reality isn't all about legless avatars and forgettable games.

Case in point, members of the deaf community are now taking advantage of modern headsets' increasingly sophisticated hand tracking to use sign language in virtual reality.

It's a compelling use case for the technology, allowing those who grew up with sign language as their first language, those who developed hearing problems later in life, and anyone else who speaks using gestures to communicate effortlessly inside virtual worlds.

A user who goes by Jenny showed off the feature in a video for UploadVR.

Jenny is part of Helping Hands, a VR sign language community comprised of 5,000 volunteers who teach others how to take advantage of the tech to keep in touch with others in the community virtually.

The Quest 2's hand tracking is a big upgrade over Valve's Index VR headset, which previously forced users to come up with alternatives to common sign language signs. For instance, as Jenny demonstrated in the UploadVR video, users used to have to turn their entire wrists around to mimic the crossing of two fingers.

But the Quest 2 relies on a suite of cameras, not sensors, to keep track of finger movements, allowing for much greater expression of dexterous motions.

"As you can see it might look a little bit more like fluidy and flowy," she told UploadVR. "That's because it's actually cameras just looking at my real hands rather than a controller guessing and filling in the blanks."

"It's really amazing and honestly a little strange to experience after so many years of all of the controllers' movements being quite rigid," she added.

While it's a big upgrade, there are still plenty of limitations to the technology. For instance, users can't touch their virtual hands to their bodies, which is required to sign many words in American sign language.

But it's a step forward, nonetheless, demonstrating that there are plenty of other great use cases for virtual reality — outside of attending dull boardroom meetings while embodying a cartoonish and legless avatar.

"I think one of the most important advantages of VRChat in general for anyone, but especially for deaf and hard of hearing individuals, is just connection with anyone around the world," Jenny said in the video. "And that's especially important for deaf and hard hearing people, because they are a lot more likely to experience isolation, which is something."

More on VR: Founder of VR Company That Facebook Bought Roasts the Metaverse

Read This Next
Scammers Scam On
The Fyre Fest Guy Is Off House Arrest and of Course His New Scheme Involves the Metaverse and Crypto
Confrontation is Hard
Former Facebook Exec Says Zuckerberg Has Surrounded Himself With Sycophants
Zesus
Interesting Theory: Mark Zuckerberg Is Trying to Become God and Build Heaven
Midlife Crisis
Rumors Swirl That Mark Zuckerberg Is Fighting at a UFC Show
Mark's Bad Year
Layoffs Hitting Facebook as Zuckerberg's Vision Stumbles
More on Future Society
Unorthodox Urinal
Friday on the byte
Scientists Say They've Figured Out the Ideal Urinal for Not Splashing Back
Abso-Effing-Lutely
Friday on futurism
Free Speech Absolutist Elon Musk Discovers That Some Speech Is Unacceptable After All
Might See Nonsense
Friday on futurism
MSN Fired Its Human Journalists and Replaced Them With AI That Started Publishing Fake News About Mermaids and Bigfoot
READ MORE STORIES ABOUT / Future Society
Keep up.
Subscribe to our daily newsletter to keep in touch with the subjects shaping our future.
+Social+Newsletter
TopicsAbout UsContact Us
Copyright ©, Camden Media Inc All Rights Reserved. See our User Agreement, Privacy Policy and Data Use Policy. The material on this site may not be reproduced, distributed, transmitted, cached or otherwise used, except with prior written permission of Futurism. Articles may contain affiliate links which enable us to share in the revenue of any purchases made.
Fonts by Typekit and Monotype.