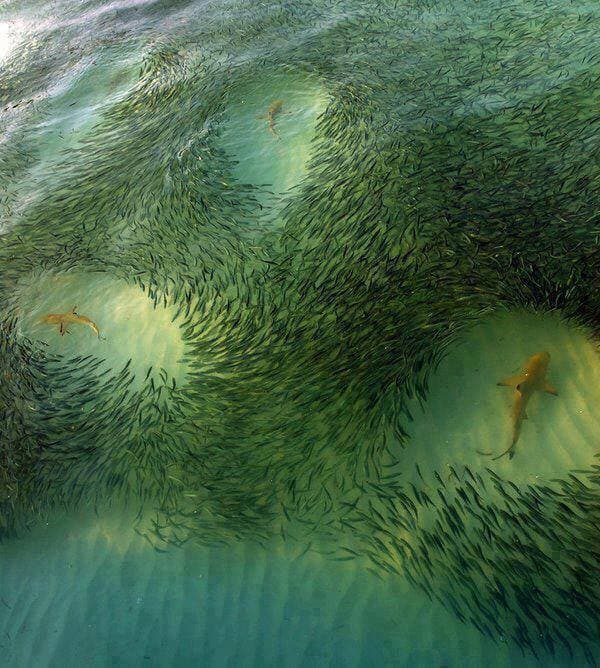 Sharks are generally seen as the terrors of the ocean (a title that was unfairly cast upon them as a result of the popular 1975 film "Jaws"). Yet, in this image, the little guys look more majestic  than terrifying.

Well, maybe "little" isn't exactly the best term for these blacktip reef sharks. After all, most people would consider a 1.6 meter (5.2 foot) shark to be rather large (I certainly would if one happened by me). However, as far as sharks go, they aren't particularly sizable. The whale shark, for example, has been known to reach an alarming 18 meters (60 feet). That said, the average size of the whale shark is a tad smaller than this, though it still comes in at an impressive 14 meters (46 feet).

But to return to the blacktip reef shark, most are slightly shorter than the average human. And though they may become aggressive around bait, there have been no reported deaths as a result of these sharks. In fact, a bit to a human rarely does serious damage, and blacktips are generally skittish and frighten easily. So although it may seem counter-intuitive, in the presence of these sharks, submerging yourself completely  is one of the best ways to avoid an attack (most attacks appear to take place when the shark mistakes the leg of someone walking by for their typical prey; allowing them to see your true size can help prevent this confusion).

And this may be helpful advice if you ever take a dive into the ocean around Africa or China, as these sharks are among the most abundant  inhabiting the tropical coral reefs of the Indian and Pacific Oceans. This isn't too surprising, as the female can give birth to two to five young annually. Another interesting fact about the blacktips is that the females have two uteri, each can hold one embryo (this is what enables multiple births). But , when it comes to strange gestation, the blacktip doesn't have anything on the sand tiger shark.

Since the 1980s, scientists examining pregnant sand tiger sharks found embryos in the stomachs of other embryos .  What does this mean? You guess it: Intrauterine cannibalism, which typically takes place about five months into the pregnancy. Like the black tip, the sand tiger has two uteri. Early in pregnancy, these may have as many as 50 embryos; however, when one of the embryos reaches some 10 cm (4 in) in length, it eats all the smaller embryos, so that only one large embryo remains in each uterine horn. This allows the remaining embryo to feed itself on its siblings' bodies and the mother's nutrient supply (growing big and study for when they finally venture out into the open sea).

Honestly though, you really shouldn't worry about shark attacks (no matter how cannibalistic or numerous they may be). Really, not at all. According to the International Shark Attack File (ISAF), which is funded by the Florida Museum of Natural History at the University of Florida, between 1580 and 2013 there were a mere 2,667 confirmed unprovoked shark attacks around the world. Of these attacks, only 495 were fatal. Now, I don't want to diminish nearly 500 deaths, but over the course of some 430 years, it is nothing to cause alarm.

In fact,  many, many more people drown in the ocean every year than are bitten by sharks. According to the CDC, in 2004 alone, there were 3,308 unintentional drownings in just the United States. So ultimately, one could consider the mere act of swimming in the ocean more dangerous than a shark attack.

Sadly, despite the fact that they are not threatening to humans, and that they are one of the most abundant species of sharks in coral areas, the creatures are still listed as "near threatened by the International Union for Conservation of Nature. Though they used for meat and liver oil, they are not very valuable commercially. The dip in numbers exists has assessed the blacktip reef shark as Near Threatened. Although the species as a whole remains widespread and relatively common, overfishing has led to its decline as it limited food options.