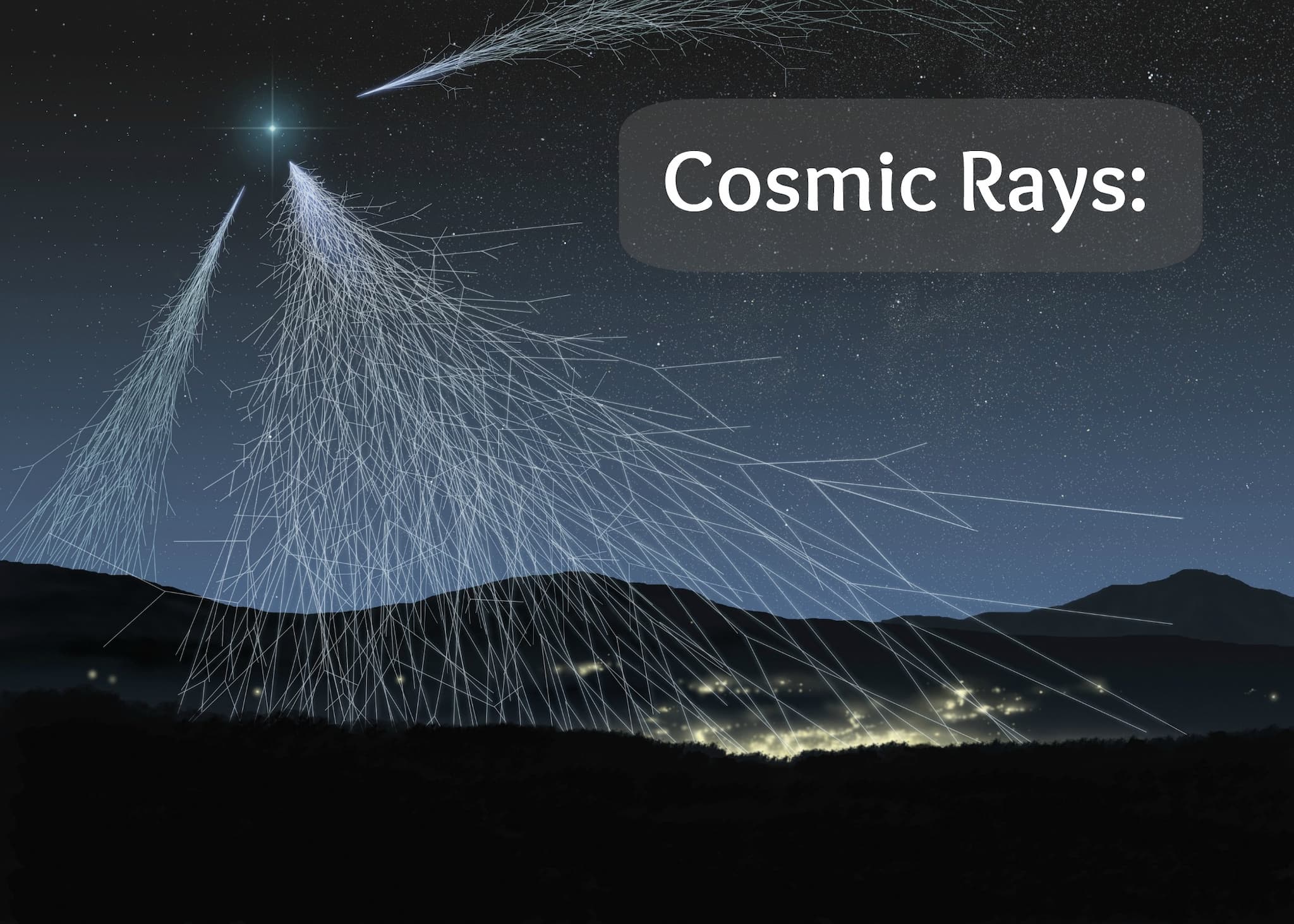 You've probably heard of 'cosmic rays' before - it's a term that is thrown about regularly in modern astrophysics and cosmology - but do you know what they really are?

Cosmic rays are high-energy particles with intrinsic mass. They can come from outside the solar system or from extreme solar events (like solar flares). Cosmic rays range from atomic nuclei that have had all of their surrounding electrons stripped away to more exotic particles that make up the standard model. Photons used to be considered cosmic rays. However, they are quanta of electromagnetic radiation that have no intrinsic mass; photons are known by their common names, such as "gamma rays" or "X-rays."

The origin of cosmic rays is unknown, but they are suspected to be born from supernovae, possibly from outside our galaxy. The highest energies produced by cosmic rays have been found to be 40 million times that of those produced in the Large Hadron Collider, but most don't reach this extreme. Fortunately, our atmosphere protects us from the main front of this strange phenomenon, but out in space where there is no protection, cosmic rays damage equipment--such as microelectronics. However, contrary to popular sci-fi movies, they don't cause the development of superhuman abilities (The Fantastic Four, anyone?). Studies have tried to detect these particles in a number of experiments, but it has proven difficult for ground-based equipment. They are most easily detected as primary rays in space or the upper atmosphere, and our most effective way of picking up these elusive particles hasn't been with fancy equipment, but actually through our own eyes!

The "cosmic ray visual phenomenon" are random flashes of light - occurring, on average, every 2.9 minutes - experienced by astronauts while in space. Why this happens is currently unclear, but several theories have been put forward. They could be caused by Cherenkov radiation (in which charged particles polarize molecules as they pass, and rapidly change back after producing radiation, which can be in the visible spectrum); they could also be caused by interactions with the optic nerve, or even interactions directly with the visual cortex in the brain. The Apollo astronauts reported 3 different varieties of flash: spots (most common), streaks, and clouds (rarest), and they were apparently more frequent when travelling to the Moon than back to Earth. They also claimed that rather than being exciting, they were actually irritating. This is because they made getting to sleep very hard indeed. Imagine trying to drift off with someone repeatedly flashing a torch in your eyes.

In the 1960s, NASA set out to investigate these flashes during the Apollo 12 mission with the 'helmet dosimetry experiment', which highlighted anywhere on the astronauts' helmets that a cosmic ray passed through. Through this experiment, and ALFMED emulsion detector studies (Apollo 16 and 17), it was confirmed that the cosmic rays were, in fact, the cause of the light flash phenomena. Some astronauts have been very sensitive to the flashes, whereas some experience nothing at all.

Cosmic rays aren't currently known to be harmful, but researching them is still important to find out whether they have any as-yet undiscovered effects on the brain or body. In the 90s, we developed a piece of sophisticated equipment called the Silicon Eye. The Silicon Eye is worn by an astronaut, and whenever a flash is experienced, the astronaut pushes a button to record the frequency of the flash. Meanwhile, the detector measures the energy of all nuclei that pass through it. Even today we are still conducting research on the ISS, and hopefully one day we will understand the nature of the light flash phenomena. This is especially important as we approach manned missions beyond the Earth-Moon system - we don't know if much longer exposure to cosmic rays has any serious side effects.