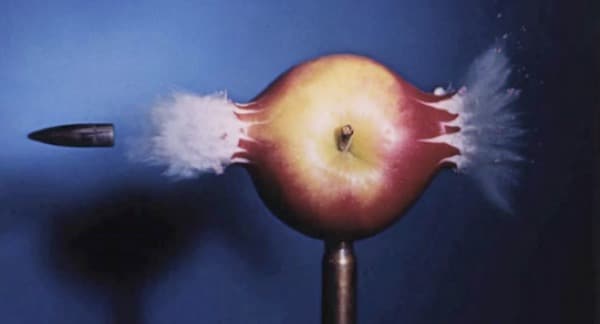 Take, for example, the light-capturing camera from MIT.

It can photograph a staggering one trillion frames per second. For comparison, your average movie camera takes a mere 24 frames per second. Of course, our eyes aren't able to keep up with anything close to these speeds. The eye and brain, coupled together (obviously) can generally register about 1000 frames per second.  So what is the point of having a camera that can record this fast?

Slowing it down, of course.

In the video that is displayed below, you can see footage of the fastest thing in the known universe, light, traveling some 225,000 km a second (140,000 mi/sec) through water. Though the footage only recorded for a mere fraction of a second - it manages to capture a picture in less than two-trillionths of a second - researchers were able to slow the camera down and extend the frames to twenty seconds.

Interestingly, the project began because researchers were trying to peer around corners. This was accomplished by capturing reflected light and then computing the paths of the returning light. As John Markoff notes, "thereby building images coming from rooms that would otherwise not be directly visible."

According to Andrea Velten, a researcher involved with the project, “There's nothing in the universe that looks fast to this camera.” This research dates to 2011.

If you think that camera is impressive, in 2014, researchers in Japan developed a motion picture camera that can take an amazing 4.4 trillion frames per second.

The technique is known as “sequentially timed all-optical mapping photography” (STAMP). The work was published in Nature Photonics. Ultimately, the team anticipates that this could be useful in auto and semiconductor factories, where the camera may be able to help develop a better understanding of laser processing. It could also assist the medical field, where it may help advance ultrasonic therapy.

This is some  10,000 times faster than any system that is available commercially. For example, the Phantom V1610, which is the kind of technology that is used in most slow motion videos.

The STAMP has also been suggested to improve the study of chemical reactions and heat conduction, which travels around six times slower than the speed of light. However, more practical applications will have to be forthcoming, as the current design is rather bulky. The team hopes to continue their work and shrink the camera, as the current prototype stands at around a metre squared.

See the Phantom in action in the video below.