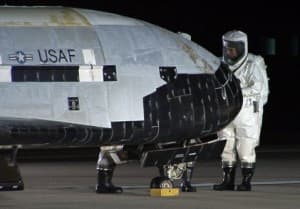 The United States Air Force has a secret "X-37B space plane" that is currently doing things in low-Earth orbit. The entire space plane mission sequence has been running since 2006, but the X-37B has just passed 600 days in orbit.

The shuttle is unmanned and is the third such shuttle to be flown in orbit by the USAF. Other than that, we don't really know a lot about the program.

The X-37B was launched on December 11, 2012, and as of September 1 it has spent 630 days in orbit. Joan Johnson-Freese, who is a professor of National Security Affairs at the U.S. Naval War College said, "The Air Force continues to push the envelope of the solar-powered X-37B capabilities." - but, again, those "capabilities" are largely a mystery.

As referenced in  Johnson's statement, the plane is powered by solar energy. This is one of the things that allows the plane to operate in space for so long. The plane is able to survive in space much longer than most other reusable spacecraft, though it's still unable to compete with the longevity of other satellites, many of which are built to last decades in orbit. The only official goal the USAF has set for the X-37B is it's intention to develop reusable space vehicle technology.

Many people have speculated about the X-37B's "true" purpose. At minimum, it's probably safe to assume that the USAF is testing some type of equipment or running some experiment in the payload bay of the plane (otherwise, why would they have added one?).

Before he retired, General William Shelton, who was commander of the Air Force Space Command, gave us a detailed status update about the X-37B. "I'll give you my standard line on the X-37. It's doing great. I can't tell you what it's doing, but it's doing great."