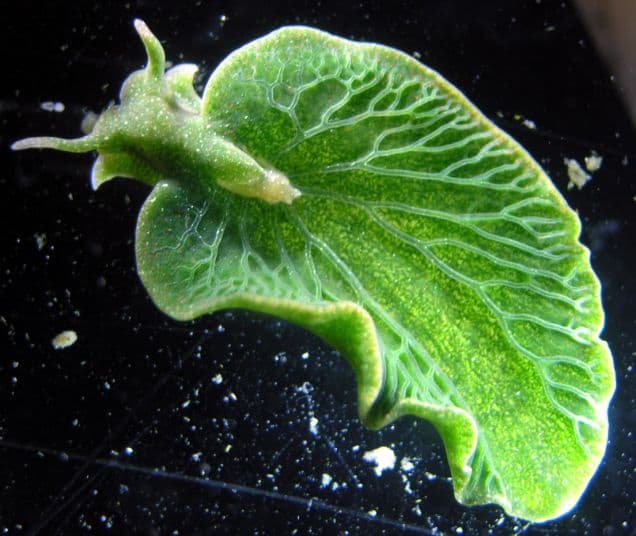 Scientists recently discovered that this species of sea slug takes genes from the algae it eats, allowing it to photosynthesize like a plant and survive for months at a time on sunlight.

The immediate ramifications are obvious. No more grocery stores, which would greatly reduce the number of Sunday drivers. No more restaurants, which would make planning a first date a lot harder. Nothing to post on Instagram; Food Network would go bankrupt...the results would be catastrophic. However, it would also solve a number of serious issues that our species faces.

Because the true impact would be far, far greater than Instagram or Food Network. According to the United Nation's World Food Program, 1 in 9 people don’t have enough food to live a healthy life, and they will encounter a number of health issues as a result. Indeed, a staggering, 3.1 million children die each year as a result of inadequate nutrition.

Such statements may seem unnecessarily tragic in the face of interesting and exciting news, like this latest development regarding the Emerald Sea Slug; however, it is important to remember that these interesting discoveries have a great impact on the scientific world (science is a lot more than simply interesting facts).

For the last few decades, scientists have been attempting to determine how this sea slug (Elysia chlorotica) is able to photosynthesize like a plant. We believed that is had something to do with horizontal gene transfer, and now we finally have proof. An advanced imaging technique has allowed scientists to see that the slug steals genes from the algae.

The process works because, after it steals chloroplasts from the algae, the sea slug embeds them into its own digestive cells. From here, the chloroplasts are able to continue to photosynthesize for up to nine months. As the Marine Biological Laboratory (MBL) notes, this is exceedingly beneficial to the sea slug: "The photosynthesis process produces carbohydrates and lipids, which nourish the slug," and they function longer within the slug than they would the alga. However, this operational time-frame is not the same across the board. As the paper notes, "The symbiotic plastids, kleptoplasts, can photosynthesize inside the slug cell for varying periods, from hours to months, depending upon the slug species, providing at least some source of energy for the animal."

But regardless of how long it functions, the fact that it functions at all is impressive.

"This paper confirms that one of several algal genes needed to repair damage to chloroplasts, and keep them functioning, is present on the slug chromosome," study author Sidney K. Pierce explained in the MBL press release. "The gene is incorporated into the slug chromosome and transmitted to the next generation of slugs," Pierce added. "While the next generation must take up chloroplasts anew from algae, the genes to maintain the chloroplasts are already present in the slug genome."

This stands as one of the only known examples of functional gene transfer from one multicellular species to another. Yet, there is still much to learn and study, as the exact mechanism of the gene transfer is unknown. We can see it happen, but we can''t say exactly how it transpires. At least, not just yet. The paper notes a number of possible mechanisms:

The mechanism of gene transfer is of interest, but unknown. The phagosomal-based feeding mechanism utilized by gastropods could take up nuclei and other algal cell inclusions, as well as the chloroplasts. Transcriptome sequencing suggests that several dozen algal nuclear genes are expressed in the E. chlorotica cell, perhaps indicating that relatively large pieces of algal DNA rather than individual genes were transferred. However, the E. chlorotica transcriptome annotation found genes only in the slug RNA associated with photosynthesis proteins and their processing....all attempts to locate algal nuclei or their remnants with molecular or microscopical experiments in several species of Elysia have been negative. So the results so far suggest that pieces of DNA rather than entire chromosomes or individual genes may constitute the transferome. It will require a great deal more FISH testing to learn the chromosomal positions of other algal genes

And notably, the mechanism the enables such a transfer could have a plethora of medical uses. Unfortunately, as expected, it is not a cure-all. We won't be able to adopt these practices in order to allow humans to manufacture their own food from sunlight. Yet, “There is no way on earth that genes from an alga should work inside an animal cell,” Pierce says. “And yet here, they do. They allow the animal to rely on sunshine for its nutrition. So if something happens to their food source, they have a way of not starving to death until they find more algae to eat.”

Ultimately, this could help us better understand analogous applications in research into human gene therapy, and it could lead to better understanding of genetic diseases and potential treatments for them. "Figuring out the mechanism of this naturally occurring gene transfer could be extremely instructive for future medical applications," Pierce says.

Sometimes, the future looks like a bright, bright place. Or at least, we are reminded that there are bright sectors of society where scientists are doing good work.