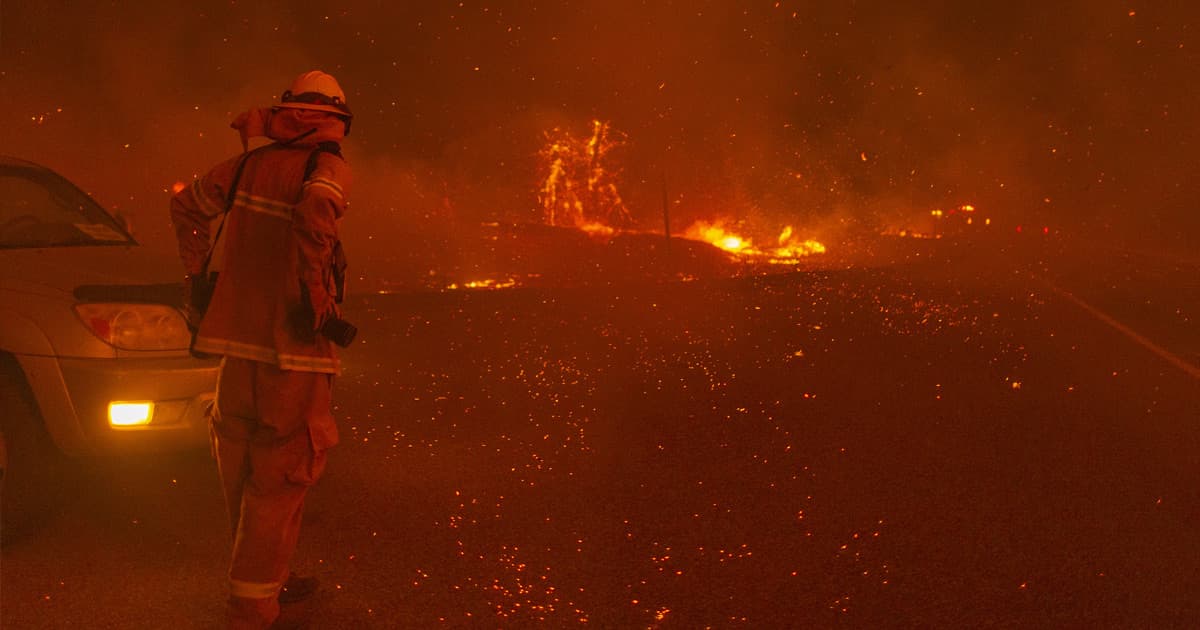 As wildfires rage on the West Coast and hurricanes menace the Southeast, it can be hard to tell what's a result of climate change and environmental degradation — and what's just a run of extremely bad luck.

Some experts are currently sounding the alarm, arguing that what we're seeing are the early days of increasingly lethal extreme weather and fires.

"It’s going to get A LOT worse," Georgia Tech climate scientist Kim Cobb told the Associated Press of the ongoing California wildfires. "I say that with emphasis because it does challenge the imagination. And that’s the scary thing to know as a climate scientist in 2020."

Weather.com posed the same question of whether 2020's catastrophes could be signs of things to come, and reached a similar conclusion.

It rounded up a number of ominous weather news items: the hottest decade in recorded history, freakishly early snowfalls, the California heat wave, and fires that turned the sky over the Bay Area a sickly orange.

"These are all things we should expect to see more and more of as climate change takes a deeper hold on our climate and on the extremities that it creates in our weather," Jeff Schlegelmilch, director of the National Center for Disaster Preparedness at Columbia University, told the site.

"As temperatures increase, warm-season phenomena like drought, wildfires and heatwaves are expected to be worsened both in intensity and in longevity," he said. "The increase in temperatures will dry out the ground and its flora, which will slowly lead to a positive feedback cycle of warmer temperatures, then less rainfall, then warmer temperatures and so forth."

The grim conclusion: climate scientists are saying that they feel as though though the things they've been warning about for years are finally coming true.

"It seems like this is what we always were talking about a decade ago," North Carolina State climatologist Kathie Dello told the AP. "A lot of people want to blame it on 2020, but 2020 didn’t do this. We know the behaviour that caused climate change."

More on extreme weather: Extreme Weather Events Are More Frequent Than Ever

Read This Next
Unreliable Friends
Archipelagic Nation Sick of Other Countries Breaking Climate Change Promises
The Kids Won't Be Alright
Elon Musk Warns That Humankind Will "End Up in Adult Diapers"
Circle of Life
Hooray! The Great Pacific Garbage Patch Has Become a Thriving Ecosystem, Scientists Say
Bad Spill
Scientist Warns That a Huge Tanker Is Probably Going to Spill a Million Barrels of Oil Into the Ocean
Life on Earth
Astrobiologists Suggest the Earth Itself May Be an Intelligent Entity
More on Earth & Energy
Fire Bird
Yesterday on the byte
Experts Say Birds Are Catching on Fire on Power Lines and Starting Wildfires
Three Cheers
Yesterday on the byte
Happy BBQ Season! There's Beer Made From Toilet Water Now
More and More
Thursday on the byte
Oh Great, Gas AND Solar Prices Are Going Up
READ MORE STORIES ABOUT / Earth & Energy
Keep up.
Subscribe to our daily newsletter to keep in touch with the subjects shaping our future.
+Social+Newsletter
TopicsAbout UsContact Us
Copyright ©, Camden Media Inc All Rights Reserved. See our User Agreement, Privacy Policy and Data Use Policy. The material on this site may not be reproduced, distributed, transmitted, cached or otherwise used, except with prior written permission of Futurism. Fonts by Typekit and Monotype.